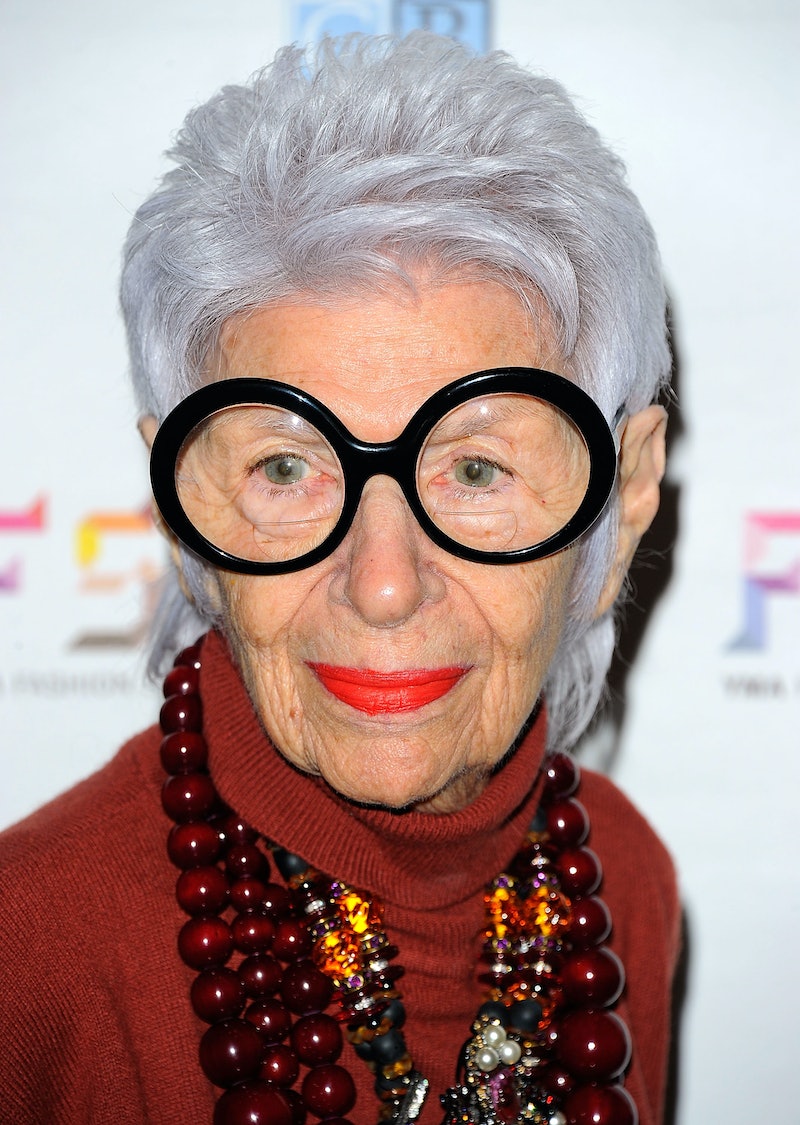 Queen of costume jewelry and impeccable fashion, Iris Apfel recently made headlines when Alexis Bittar cast her and Tavi Gevinson in their Spring 2015 campaign. There are 75 years between the two women, but both are united in their amazing personal style. Now, the 93-year-old is about to be the talk of the style set yet again with the new documentary, "Iris," about Iris Apfel's life, expected to come out April 29th in New York City.

Apfel will be turning 94 this August, but she doesn't seem to be stepping out of the fashion spotlight anytime soon. Her career took off when she worked as an interior designer for the White House, although she is not supposed to talk about it, according to the documentary trailer. She eventually became a style icon with her wide, thick-rimmed glasses and vast collection of costume jewelry. Despite her impeccable fashion sense, Apfel is not one to judge because "it's better to be happy then well-dressed." Don't you just love her?

The documentary was directed by film-maker Albert Maysles, who passed away just last week, making Apfel the subject of his final film. Take a look at the trailer below and my (totally official) ranking of the best looks, from favorite to least favorite. Of course, I'm only taking the brief trailer into account — I'm expecting even more sartorial amazingness once the movie is open to the public. As Apfel says, it's all about "getting dressed for the party."

1. When She Put Kylie Jenner To Shame

Apfel rocked lavender hair before Kylie Jenner made it cool.

2. When She Channeled A Cowgirl (And It Worked)

I may have frowned at this fringey top on just about anyone else. But on Apfel, it looks perfect. Paired beaded jewelry and a maroon shirt, I'm pretty sure she channeled her inner-Daisy Duke for this interview.

3. When She Monochromed Better Than Kate Middleton

Don't get me wrong, Kate Middleton's monochrome pregnancy style is so cute and sophisticated. But when you have a fashion icon matching her pantsuit to her fur overlay and her statement jewelry, then you know there is no competition. Sorry, Duchess Middleton.

4. When She Piled On The Beads

Past the age of 8, it's difficult for anyone to look cute wearing a thousand plastic beads. Unless you're Apfel, apparently. She looks amazing wearing necklaces up to her jawline and all over her forearms, sticking to solid colored accessories to pair with her amazing printed coat.

5. When She Shopped At The Craft Store

Get this — Iris Apfel shops at craft stores. This means that we, too, can accessorize like the amazing icon. Find your nearest Michaels now and buy all of the beads. All. Of. Them.

6. When She Rocked Turquoise And Silver

A man in the documentary stated that "she has the most remarkable collection of couture costume jewelry in the United States." But her pieces are from all over the world. She stated "everything I have, I go out and find."

7. When She Went Big On Her Outwear And Her Jewelry

Although her jacket is a huge statement, Apfel wasn't afraid to go big on the accessories front as well.

8. When She Went Black And White (And Yellow)

Here Apfel mixed black and white prints with black and white jewelry. But she made the outfit really stand out when she added a pop of color with a bright yellow bracelet.

Look, this ensemble is still amazing, but it does sort of resemble a shag carpet.

I cannot say it enough — Iris Apfel is my style icon.