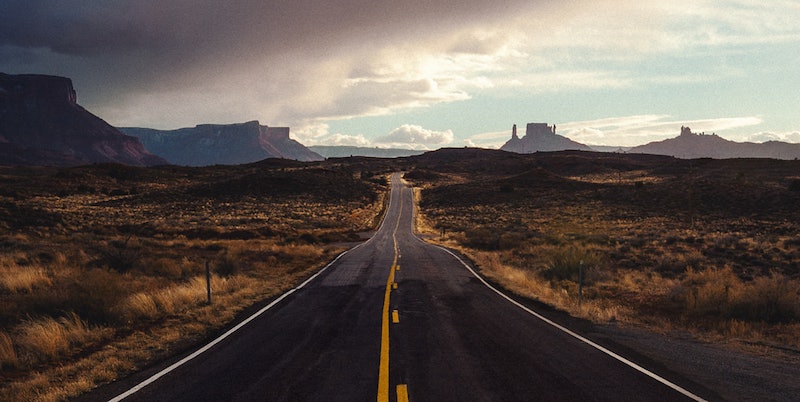 Are you going on a road trip for spring break? If yes, you'll want to see this: Data scientist Randy Olson has calculated the ultimate road trip route for the United States. How does one do that? With a little help from technology, of course — but it's still pretty cool. Check it out.

This isn't the first time we've encountered Olson's work; in addition to the graphs he made to illustrate a study exploring whether age matters in a relationship, he's widely known across the Internet for coming up with the optimal strategy with which to find Waldo of Where's Waldo? fame. This time, Discovery News' Tracy Staedter approached him about putting his know-how to use planning the ultimate road trip — and, naturally, he rose magnificently to the occasion.

I've typically referred to Olson as a data scientist when discussing his work, which is, in fact, accurate; however, Ana Swanson at the Washington Post dubbed him a “data tinkerer,” which is now my new favorite job description. It's spot on, too — Olson's projects are fueled by curiosity, and with the goal being to use the data available out there in the big, wide world to help us understand that big, wide world. How do you that? By tinkering around with the numbers and figures until you finally uncover what it's trying to tell you. I am terrible at juggling numbers myself, but I find the results of such experiments fascinating — which is why I'm glad there are people like Randy Olson out there who can not only do the calculations, but also explain them in ways that make sense to the scientific laypeople among us (that is, me).

Anyhoo, here's what Olson came up with:

As Olson wrote on his website, initially he and Staedter needed to lay out a few rules for their hypothetical adventure:

From there, Staedter came up with a list of 50 stops — 48 to fit the one stop per state requirement, plus one in Washington, D.C. and an additional one in California — which includes everything from Yellowstone to the White House. You can see the full list over at Discovery News, but a few of my favorites include the following:

Now we get to the tricky bit: Actually figuring out the optimal route by which to see all these awesome things we have hanging out in our country. Obviously Olson had to stick to roads — that is, he couldn't just draw a straight line between each landmark — so he harnessed the power of Google Maps. Because looking up all the directions manually would have taken roughly until the end of time, he wrote a Python script and paired with the Google Maps API. The results? Nicely calculated distances and time driven for all 2,500 possible routes between the 50 landmarks. Isn't technology great?

The biggest challenge, though, was solving a classic “traveling salesman problem”: How can you visit all those landmarks, in order, while keeping the distances between them as small as possible? According to Olson, this involves “finding a route that backtracks a little as possible,” something which gets to be rather difficult around Florida and the Northeast.

This is about where Olson's explanation starts to the get the best of me; I have no head for numbers, and this bit is all numbers. From what I gather, though, the trick is accepting that you're not going to use the “absolute best” route between each stopping point. Once you do that, you can use something called genetic algorithms — the technique Olson used to solve the Waldo problem — and find a solution that's “good enough.” The algorithm Olson used calculated the solution in less than a minute, so hoorah for that.

Here's the trip by numbers:

Oh, and hey, guess what? Olson created an interactive version of the map (which is what I've screen-grabbed here for you) via Google Maps. Head over there to check it out — it's pretty cool.

So there you have it. Of course, if your idea of an awesome road trip doesn't involve any national landmarks, you can tweak the algorithm as necessary until it hits all the spots you do want to visit (supposedly haunted places, perhaps?). Olson went ahead and created another map for road tripping to popular U.S. cities according to TripAdvisor's top-rated cities in each state, as well as for a number of places in Europe, so head on over to his website to check them out. Happy travels!

More like this
Dyson Is Dropping Futuristic, Air-Purifying Headphones
By Rachel Lapidos
This AI Filter Shows How You’d Look In Different Time Periods
By Alexis Morillo
65 Funny Dares You Can Send Your Friends Over Text
By Siena Gagliano
Here’s How To Find Your Spotify Wrapped
By Emma Lord and Emma Carey
Get Even More From Bustle — Sign Up For The Newsletter