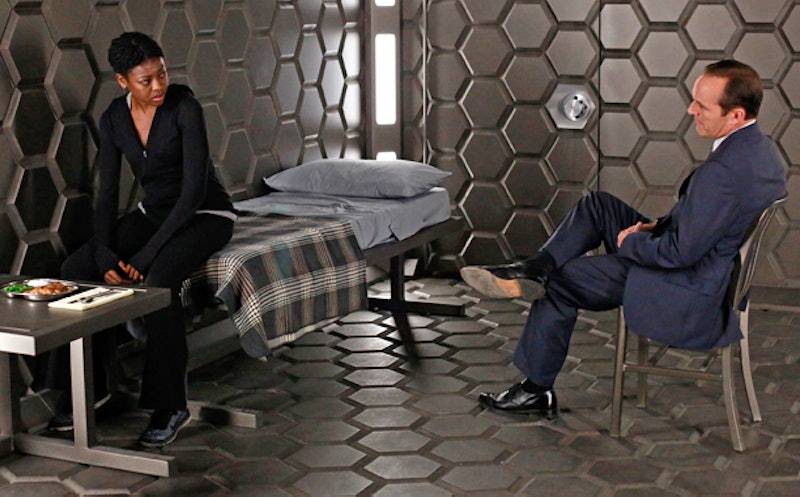 With Agents of S.H.I.E.L.D. being a Joss Whedon-produced show, it's hard not to compare it to that other high-profile Joss Whedon show: Buffy the Vampire Slayer. By now, the sort of Whedon sensibility people first saw in Buffy has become recognizable: the smarmy quips in the face of danger, the playful banter between characters, the strong and fully realized female characters. But there was one central relationship to Buffy that would form the most central idea for subsequent Whedon shows. It wasn't Buffy and Angel, or Buffy and Spike, or even Willow and Tara. It was Buffy and Giles.

Giles served as a surrogate father to Buffy, and it was one of the most compelling and enduring relationships of the show. The audience got to see both Giles and Buffy, both incredibly flawed human beings, form a relationship based on unconditional love. That's the idea behind many Whedon shows: the idea of a created family. It's definitely here in Agents of S.H.I.E.L.D — Skye is an orphan who wants so badly to be accepted into this new, S.H.I.E.L.D. family that's she's found, she flat out says it in the third episode. And in this, new, Frankenstein-esque family, Agent Coulson is definitely the dad.

He plays the benevolent patriarch in this episode to the prodigal son — Akela Amador (played by Pascale Armand, who's improving Marvel's on-screen diversity) his old S.H.I.E.L.D. protege who was presumed to be dead. Amador has been involved in high profile robberies since then, and the rest of the agents assume that she's gone to the dark side, but Agent Coulson is determined to give her a second chance. Turns out she's being controlled by a camera implanted into her eyeball, so Fitz and Simmons have to give her an on-the-fly eye surgery so she isn't killed by the killswitch installed in the camera, which can be deployed at any time by the faceless bad guy pulling the strings.

We never get to meet the bad guy — even the person controlling Amador is being controlled — but Agent Coulson gets to give Amador the second chance she deserved. Amador's character isn't fleshed out too much in this episode, except for the fact that she is a stone-cold badass (who's not afraid to get a needle stuck into her eyeball). But by the way Marvel television execs were trying to keep Amador under wraps at New York Comic Con, I'd say that we haven't seen the last of her.

Not only does Agent Coulson deserve a "#1 Surrogate Dad" mug for giving his Amador a second chance, but he and Skye get some solid bonding time in the episode. Skye gets to give him a new nickname and thank him for believing in her, and the whole thing is pretty darn cute. Not quite at Buffy-Giles level, but give it time. We're just starting to get to know this new family of weirdos, after all.