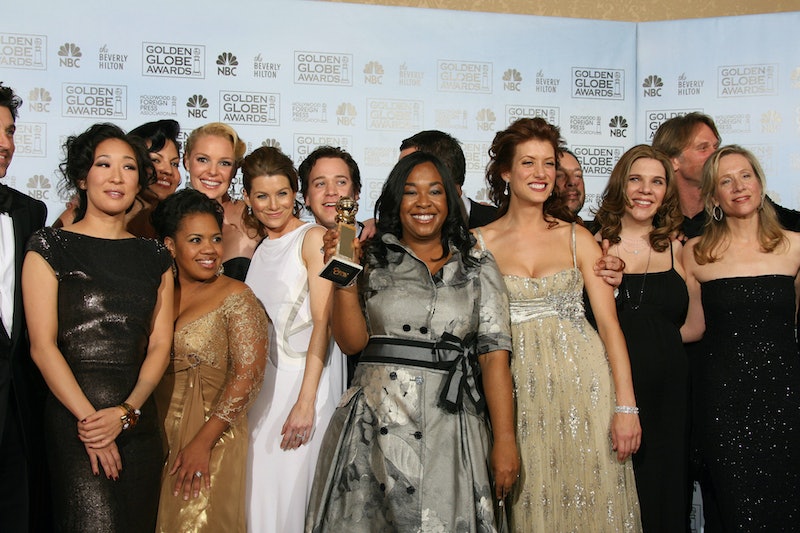 The first season of Grey’s Anatomy is a time capsules of television (like the first seasons of The O.C. and Gossip Girl). Maybe it was just me or the time in my life during which I was watching (my first year of college, natch), but in merely nine episodes, Shonda Rhimes created a world that was so perfect, so must-see, that I’ve been a fan ever since. I’ve even expanded my love to include Private Practice (RIP), Scandal, and the Rhimes-assisted How To Get Away With Murder.

Granted, there have been some missteps — George and Izzie getting together is the most egregious pairing in television history, and I will fight you on that if you disagree, and what was that whole ghost Denny thing? — but the show is still ridiculously good fun. Also, the guys are still hot (hello, Jackson). Who can believe that it’s been ten whole years since the premiere? To commemorate the occasion, I’ve done some of my usual Internet digging to find out more dirt on one of my favorite shows. Here’s a quick round-up of everything you thought you new about Grey’s Anatomy — to quote a long-departed favorite television show in my past, “you think you know, but you have no idea.”

There’s Broadway Blood On The Show

Sara Ramirez (aka Dr. Calliope Torres) was on Broadway before she hit Seattle Grace. Ramirez starred as The Lady Of The Lake in Spamalot — a role for which she won the Tony Award for Best Featured Actress in a Musical.

Seattle Is Not The Setting

Don’t go traveling to the home of grunge and coffee to catch a glimpse of Ellen Pompeo and Justin Chambers: Grey’s Anatomy is not actually filmed in a hospital in Seattle, Washington. It’s mostly filmed on a soundstage in Los Angeles. Meredith’s childhood home is actually in Seattle, though, in the Queen Anne neighborhood.

Alex Karev was not a player in the original script of the pilot. Producers thought that they needed another male character to hang out with George O’Malley to balance out all the girls, so they added Justin Chambers in digitally after the episode was filmed.

What gave brilliant writer (I mean, she wrote Crossroads) Rhimes the idea for the show? To put it plainly, she was watching a lot of surgery shows on TV. Is that all it takes to become a brilliant screenwriter, Shonda?

Isaiah Washington Could Probably Operate On Someone Right Now

Talk about dedication to your craft: Though he’s no longer on the show, Isaiah Washington, aka Dr. Preston Burke, would literally learn all of the surgeries he had to perform in every episode before he filmed them.

Now permanently wedged in our colloquial vocabulary, “va-jay-jay” made it into the script of Grey’s Anatomy after Rhimes heard one of her assistants say it on set. Why’d she use it? ABC said she was using the word “vagina” too often. Um, ok.

One Cast Member Was Born In A Kilt

Kevin McKidd, who plays Owen Hunt, is actually Scottish. The accent that he sported in the film Maid of Honor (the one he starred in with Grey’s buddy Patrick Dempsey) is his real speaking voice.

Jesse Williams Is An A+

Jackson Avery, also known in the real world as actor Jesse Williams, attended Temple University in Philadelphia, Pennsylvania and was a high school teacher before hitting it big in acting. Everybody has to start somewhere, huh?

I hope you feel more educated about Grey’s Anatomy, because I know I do. Now, where’s my remote?