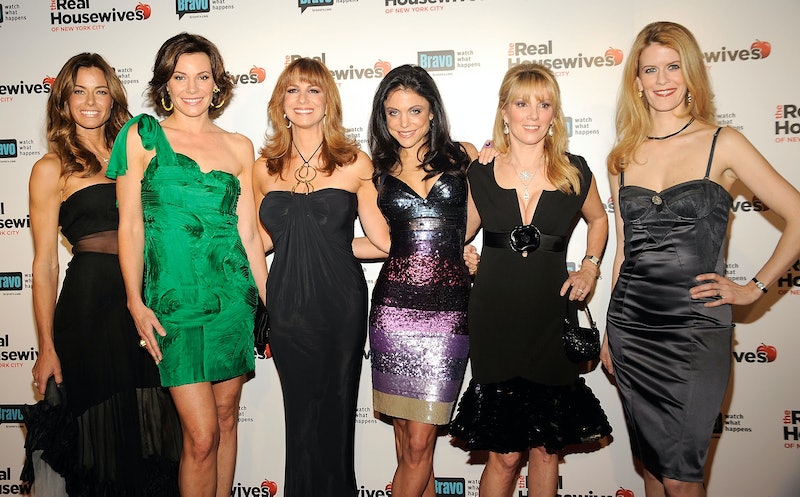 I am counting down the days until the premiere of Season 7 of The Real Housewives of New York. That's because they're bringing back some of the OG RHONY ladies, including Bethenny Frankel and LuAnn De Lesseps, who was only on the show as a "featured player” in recent seasons. I’m just the slightest bit disappointed that Jill Zarin won’t be joining us (but she’s probably crying in the master bathroom of her Upper East Side lair about it), but I’m sure that the other ladies will provide plenty of drama to go around.

To commemorate this occasion, I watched the pilot episode of Real Housewives of New York, and boy, did it take me down memory lane. The first Real Housewives on the East Coast and the second after only Real Housewives of Orange County, Season 1 featured LuAnn de Lesseps, Bethenny Frankel, Alex McCord, Ramona Singer, and Jill Zarin, following the ladies as they traipsed around Manhattan (or, in Alex’s case, Brooklyn). Having watched since its inception, it was crazy to see how much things have changed in the lives of the ladies, and, frankly, how many things have stayed the same. Here are some things I picked up on after giving the pilot the old rewatch.

The Teenagers Are Miserable

Seriously, none of these kids want to be on camera. Avery Singer, Ramona’s daughter, is a robot powered from embarrassment of her mother. When Ramona gets pushed in the pool (and is totally acting for the cameras, let’s be real), I thought Avery’s head was going to fly off like a Fembot. Aly Shapiro, Jill’s daughter, mumbles and shuffles her way through every scene, but I think all of the stuff about not having a great relationship with Bobby (Jill’s husband and Aly’s step dad) is brilliant. It’s just so honest! Victoria and Noel, LuAnn’s kids, aren’t quite teens, but they’re awkward nonetheless. Growing up on camera is not easy, and I would myself not want it, either.

WE GET IT, LADIES. You all summer in the Hamptons. They say the word “Hamptons” so many times that if we were on Pee-Wee’s Playhouse, the house would have exploded. Frankly, everyone in New York City tries to get to a beach at least once, so this isn’t all that noteworthy, but Jill and Ramona bragging about how expensive their real estate is juxtaposed with Bethenny saying that the Hamptons is all showy bullcrap (to which I can attest that is true) is brilliant.

In the opening, when they’re saying their trademarked Housewives slogans, Jill and Ramona are wearing the same dress, albeit in different colors. Given the competitive nature of their relationship, I totally don’t think this was planned. I think they shot all of the sequences separately and one of them threw a fit (probably Jill) when she saw the dresses were the same. Good move, Bravo. It’s also worth noting that Alex is wearing that Cavalli dress that she and Simon buy in St. Bart’s on their three-hour long shopping excursion. Cost per wear girl!

Rosanna Is The Hardest-Working Woman On The Planet

Rosanna, the de Lesseps’ housekeeper, is Superwoman. Not only does she put up with the Countess’ every whim, but she also cleans, she cooks, she packs, and she takes care of the kids. The look on her face when the Count brought home a dog for the kids was priceless: She’s like, “Oh good, another thing I have to clean up after.” Rosanna, I hope you won the lottery and retired or are writing a tell-all book about LuAnn that you’ll make millions off of. You deserve it.

Bethenny Has A Thing For Jasons

I completely forgot that Bethenny’s boyfriend in this first season is named Jason. Bethenny’s ex-husband is also named Jason. Since Bethenny has since departed from both of those relationships, maybe she should date a guy with a different name now.

Alex & Simon Bought In Brooklyn At The Right Time

In the pilot, Simon says something about buying their Brooklyn brownstone in late 2001 for around $2 million. Smart move, guys: today, Brooklyn’s real-estate market is literally the most expensive in the world. The family recently moved to Simon’s native Australia, selling the home for $2.7 million. That’s not a bad profit, huh?

Bethenny, LuAnn, and Ramona have come full-circle since their first Housewives episodes: They’re all divorced and all experiencing the city in a different way since the pilot. Season 7 premieres April 7, and I can’t wait to see Real Housewives of New York (which has been lagging in recent years) restored to its former glory.