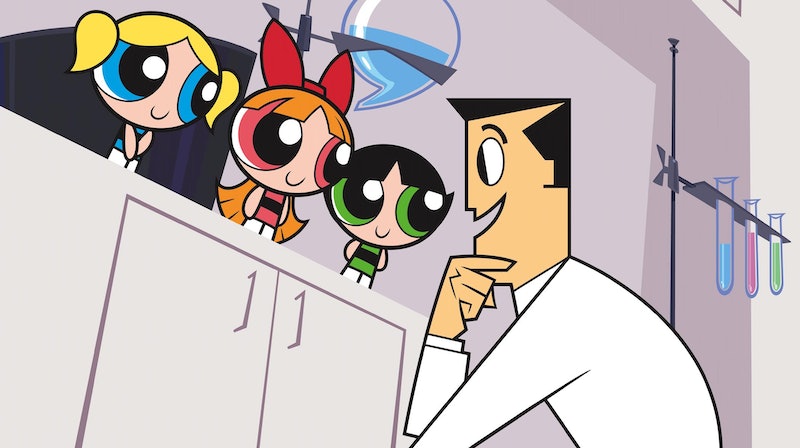 As long as there have been children's TV shows, there have been people obsessed with hiding dirty jokes in children's TV shows. Seriously — there was a penis joke on The Flintstones in the 1960s, and the classic cartoon series Looney Tunes contains some sex jokes that would make a frat brother blush. But the '90s were also a real boom time for dirty humor on kids TV shows — as the decade dawned, we suddenly had hundreds of TV channels, and thus thousands of hours of airtime to fill each week. And yet, we didn't have an Internet culture to catch on and freak out every time a cuddly children's cartoon character made an ambiguous hand job joke. It truly was a golden age.

Of course, all these jokes went right over your head at the time, and they were designed to. Though we don't have any definitive statements from any children's TV creators explaining exactly why so many kids' TV shows and movies are packed with dirty jokes — I imagine their silence has something to do with the parental outrage that flares every time people discover one of these hidden jokes, like the scandal around the alleged Jessica Rabbit vagina shot in Who Framed Roger Rabbit? — we can guess that it's simply to entertain themselves and any possibly-stoned teenaged babysitters watching along with their charges. And really, does watching a masturbation joke that you won't understand until you read an Internet article about it 20 years later really hurt anyone?

I mean, yes, probably. These jokes are probably why we're all in therapy and prone to drinking during lunch as adults. But hey, I'm just a grown woman who was somehow paid to watch cartoon boner jokes all day today, and I have hand-picked the very best nine dirty jokes from '90s kids TV shows. I'd say, "Get ready to have your childhood ruined," but I think it might have already been ruined by that secret penis on the cover of the Little Mermaid , right?

The Powerpuff Girls were kindergarteners, but they had a lot of adult responsibilities. They had to engage in tons of violent fights, outwit the sundry evil do-ers who plagued their hometown of Townsville, and make sure that their dad didn't get some kind of penis disease. You don't have to take my word on that last one, dear reader — check out the above video.

What's Buttercup shoving into her dad's front pocket at 0:45? Well, you don't have to listen, but a lot of the Internet thinks it's some condoms. The show also rocked some accidental pregnancy jokes (and an unsexy, but phenomenal, Big Lebowski parody).

For proof, check out the above clip around 0:43, where Miss Yvonne, the Most Beautiful Woman in Puppet Land, fields a sexual request from Pee Wee with, frankly, way more good humor than it deserves. And for fans of It's Always Sunny in Philadelphia: yup, Miss Yvonne is Lynne Marie Stewart, the same actress who plays Charlie's mom — proving that you're never too old to only want to act on TV shows that are totally demented.

More like "Spongeporn Schwingpants," am I right, people? Spongebob was a hot bed of sexual innuendo — I mean, they lived in a place called Bikini Bottom, what should we have expected?

What does Grandpa Pickles jack off to? Unfortunately, now you know.

Harley, you don't have to act like this! He likes you for your personality!

3. The Brave Little Toaster To The Rescue

Okay, I've never seen any of the Brave Little Toaster movies. But based on this clip, I'd say it's about an exclusive sex club for adventurous household appliances with prodigious carnal appetites, where anything goes and the only rule is: there are no rules. You can email me and let me know if I'm right.

Though Ren & Stimpy got all the era's bad press for being a graphically gross TV show that aired during a time slot usually devoted to superhero cartoons and Count Chocula ads, Rocko's Modern Life deserves to also be recognized for its bleak, terrifying portrayal of adult life. Rocko's painted existence as a serious of brutal transactions between haves and have-nots — which often twisted into some pretty humiliating and over-the-top sex jokes.

I can barely tally up the examples here: Rocko and his pals dined out at a restaurant called the Chokey Chicken; Rocko was once the subject of some intense sexual harassment by Bev Highead, his older frog neighbor; in the above clip, Rocko works as a phone sex operator; hell, his dog is named Spunky.

Show creator Joe Murray has noted that the series specifically sought to incorporate "mature" jokes that kids wouldn't understand, but I don't know — are we positive that we didn't understand? Did this show do us some subconscious psychic damage? Is this show why I spent so much of the '00s dating guys who would borrow money from me and then cheat on me with their neighbor the Pilates instructor? I've got my eye on you, Rocko.

Yeah, you've definitely seen this completely unbelievable "fingerprints/ finger Prince" gag before. But hey, you've seen the night sky before! But does that stop you from marveling at its majesty, and its glory, and the fact that someone approved this for a TV show that ran at 4 p.m. on weekdays? Sometimes dreams really do come true, I guess.