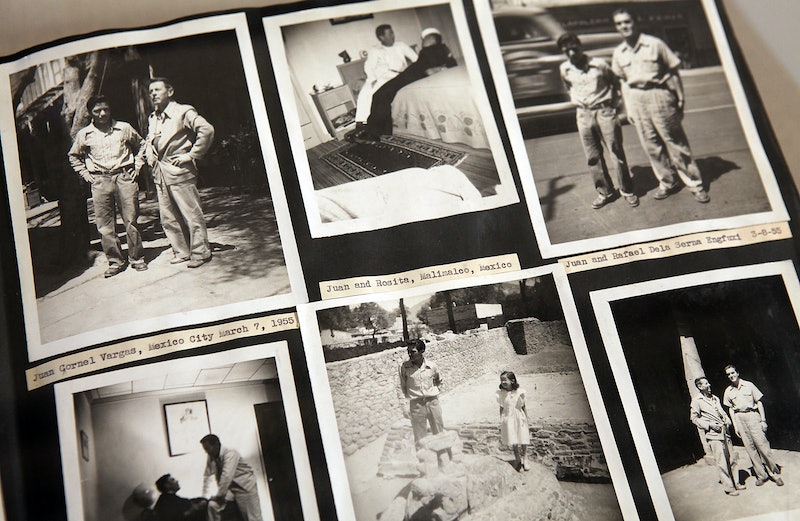 I seem to have inherited sentimentality on both sides of my family, and I feel lucky for it: come Christmastime, when I'm able to spend a few days at either of my parent's houses, I embark on the semiannual tradition of rifling through all of their old stuff. The spare-room closet at my mother's reveals drawings from both my siblings' past as well as her own detailed doodles from her college days. My father stores his own father's ephemera in the various inherited furniture that hangs out in lesser used parts of the house. In the basement, in an old dresser, I've unearthed letters my grandmother had sent to my grandfather during his service, typewritten and featuring accounts of how she would spend her lunch breaks at Stern's department store.

Even these small glimpses of the past thrill me, my family's own personal stake in time. It's a strange affirmation that it was all real, like I'd read about — the turmoil of the '60s and '70s, the brand-new suburbs of the fifties, the bobbed hair and drop-waist dresses of the twenties. Of course, with or without these items, it always had been real, but it was gratifying to mentally place myself, and my relatives, on history's timeline.

It's this same idea that makes memoirs about family history so fascinating. One mysterious, faded photograph can spark a whole inquiry into family members' past residences, jobs, and passions. While my discoveries — that my mother likes to draw and that my grandmother liked to shop — aren't earth-shattering enough to fill a whole book, others have unearthed scandals, secret romances, historically significant work, and more. If you don't have your own family's materials to sort through, these 9 titles can satisfy your curiosity for a time long passed.

Imagine going through your grandparents' old things and finding a mysterious file labeled "Correspondence: Patients A–G." That's exactly what happened to author Sarah Wildman, who discovered a stack of letters in the file that were written to her grandfather in pre–WWII Vienna. Paper Love is Wildman's journey to piece together the story of the mysterious woman her grandfather left behind in Europe.

The Girl from Human Street by Roger Cohen

It's one thing, as you get older, to understand that your parents are individuals with lives and histories beyond your own — it's another to discover the circuitous, long journey they took to get there. Cohen tracks his Jewish heritage through Lithuania, England, and South Africa, illustrating the painful yet hopeful process of uprooting one's life and seeking out a new one again and again.

Bird of Paradise by Raquel Cepeda

This personal history is for those who enjoy their powerful narratives with a side of science. Cepeda, an award-winning journalist and documentary filmmaker, sorts through the strands of her DNA to gain clarity on her ancestry. At the same time, she turns a close eye to her own past, from New York City, the place of her birth, to the Dominican Republic, and back again.

What caused Mouillot's grandparents to separate five years after surviving WWII and purchasing a house in the South of France? This question drives the author's investigation into her family's past, causing her to move into the same crumbling house her grandparents had lived in. Through old letters, papers, and other sources, Mouillot tantalizes the reader and she reveals new information about her grandparents' story, ultimately revealing the events that led to their estrangement.

The Good Daughter by Jasmin Darznik

After moving from Iran, the place of her birth, to America, Darznik knows little about her parents' history. An old photograph comes into her possession where her mother wears a wedding veil next to an unfamiliar man. What follows is Darznik's tender exploration of her mother's life that speaks to the strength of womens' pasts as well as the connection between parents and their children.

The Grace of Silence by Michele Norris

Originally hoping to write a book on America's treatment of race after the election of Barack Obama, journalist and NPR host Norris soon learned her subject was more personal than she'd first realized. Her parents reveal struggles they had faced due to their heritage that they'd kept secret from Norris and her siblings, hoping to spare them the tales of hardship. By splitting her memoir between her own family's narrative and that of race in the country at large, Norris adds an important voice to a conversation that becomes ever more critical.

An eerie three minutes of film, shot by Kurtz's grandfather, shows scenes from daily life in a Jewish village in Poland in 1938, one year before the country would be occupied by Nazis. Spurred by the discovery, Kurtz goes on an exhaustive journey to reveal the mysteries of the people captured on the film: who they were, what they did, and where their families ended up. It's a powerful statement on the preserving the places we've lost to time.

I imagine examining one's ancestry is a bit like cracking open a can of Pringles — once you pop, you can't stop. Historian Buzzy Jackson's book seems to corroborate this feeling with her account of diving into the world of genealogy. She starts in a modest genealogy society and moves on to genealogy cruises, a search for an old family graveyard, and encounters with some of the country's biggest ancestry buffs. It's a great exploration for anyone who was curious about their own past — and wants to see how far one can take it.

On Gold Mountain by Lisa See

Romance, sibling rivalries, new businesses, secret marriages — this could be the synopsis of a soap opera or See's rich examination of her family in the last century. She chronicles her family's beginnings as new immigrants to the West coast of the United States and their subsequent rise in society. She combines historical research with her own family stories to show a portrait of Chinese-American life.