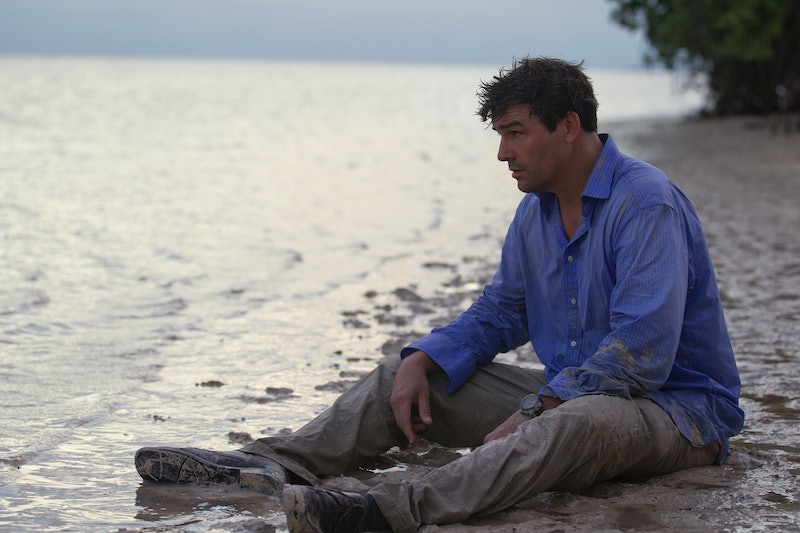 As Coach Eric Taylor on Friday Night Lights, Kyle Chandler taught us everything we need to know about sensitive masculinity. As John Rayburn on the new Netflix family thriller Bloodline , he's sure to make some choices of which Coach would very much not approve. As much as I fully support him being in all the things, I'm not sure I can handle Kyle Chandler taking off his Coach Taylor hat.

And it's not fair, I know. Typecasting is the bane of actors who are talented and privileged enough to have created a character as iconic, beloved, and gosh-darn charming as Coach. Is it Kyle's fault that he won our hearts by embodying the best dad/husband/molder-of-young-men to grace our televisions in the last few decades? The man just did his job.

Since Friday Night Lights played its last game, Chandler has been laying relatively low with small but memorable roles in movies like Zero Dark Thirty, Argo, and The Wolf of Wall Street. His family is still based in Austin where the beloved show filmed; Chandler recently told The Hollywood Reporter that he served a regular 24-hour weekly shift as one of the town's volunteer firefighters and can't wait to get back to it. (Cue fantasies of Kyle Chandler heroically carrying you out of a burning building, the flames licking his chiseled face as he brings you to safety. People of Austin: I know that it's tempting, but remember that arson is a crime. Even if it is your own house.)

It's time for Chandler to make his mark on another series, and Bloodline just might be the project to break the Eric Taylor mold. From the creators of Damages, the series concerns the tightly knit Rayburn family, most pillars of their Florida Keys community. When a black sheep brother returns, the family's moral fortitude is tested. To no one's surprise, Chandler plays the most responsible of the Rayburn siblings. John is the town's sheriff, an authority figure and family man just like our Coach. But the show's Damages pedigree and tense trailers would indicate that we can expect sex, violence, and betrayal, the likes of which Dillon Texas has never seen. (At least since Tim Riggins left town.)

It won't be an easy feat to supersede our mental image of a noble yet put-upon small town Texas father figure. But it's time for us to let Chandler let Eric Taylor go. I promise to fully accept him in this new gig, though I reserve the right to internally squee when John Rayburn stands with his hands on his hips ("Coach about to give you a talking to" pose) or cuddles on the couch with his wife. (If I squint hard enough, Jacinda Barrett could be Connie Britton.) We can all do this. Together. Coach believes.

More like this
Sadie Sink Would Escape Vecna From 'Stranger Things' With This Taylor Swift Song
By Grace Wehniainen
Emma Thompson, Lashana Lynch, & Stephen Graham Lead Netflix’s 'Matilda'
By Sophie McEvoy
Everything We Know About When To Expect The Rest Of The Upshaws Season 2
By Kadin Burnett
Who Is 'Stranger Things 4' Fan-Favorite Joseph Quinn Dating IRL?
By Grace Wehniainen
Get Even More From Bustle — Sign Up For The Newsletter