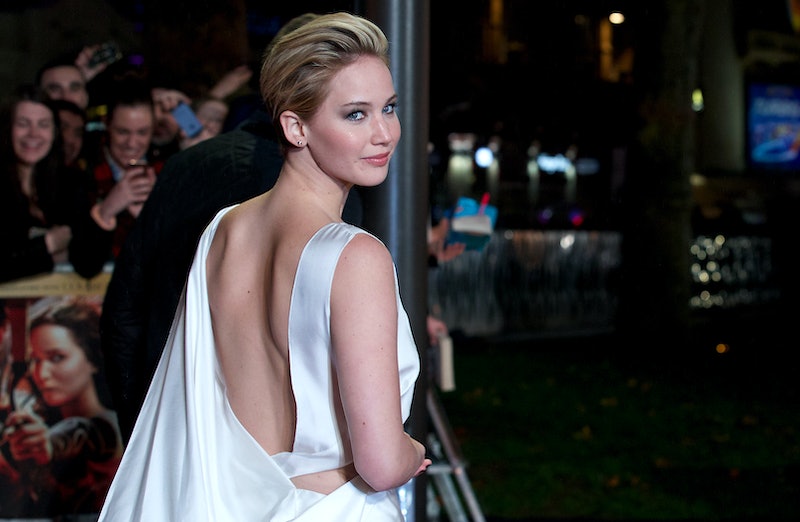 In The Hunger Games, Katniss bravely stands up and takes her sister Primrose's place in a cutthroat competition. But, when Dancing with the Stars premieres on March 16, it'll finally be Prim's turn to enter the arena. Willow Shields, the actress who played Prim in The Hunger Games movies, is going to be one of the 12 contestants, competing against celebrities like Shark Tank's Robert Herjavec, soul singer Patti LaBelle, and Olympian Nastia Liukin. So, will her on-screen sister and co-star cheer her on from the sidelines? Will Jennifer Lawrence show up on Dancing with the Stars in the audience to support Prim?

I know Shields is hoping for it. When she was questioned outside a Dancing with the Stars rehearsal, a paparazzo with a video camera started questioning her about everything related to the show: how rehearsals were going, how nervous Shields was to be the youngest contestant, etc. The inquirer ended with "Who do you think is going to be the first Hunger Games castmate to come see you?" Shields answered quickly, "Oh, I don't know. I'm hoping Jen comes to see me." (Really? My first guess would've been Josh Hutcherson. I don't know why — he just seems to have more free time on his hands.)

The truth is, I'm not as certain as Shields is that Lawrence will be able to make it to the set. Obviously, J. Law has a lot going on. Right now, it looks like she's in the middle of filming Joy, the next film by David O. Russell. DWTS fans should be excited — David O. Russell is the director of Silver Linings Playbook, the movie that turned Lawrence into a ballroom dancer. I don't know where the production is filming at this exact moment, but recently the Joy was shooting in Massachusetts (where David O. Russell also made The Fighter and American Hustle). So it looks like Lawrence will be East Coast-bound for a while, and not really within striking distance of the Dancing with the Stars arena.

And, once she finishes Joy, it looks like she's not really going to have much downtime before going straight into filming X-Men Apocalypse. According to Screen Rant, X-Men is going to start filming in April. Like Joy, that one is not so close to Dancing with the Stars, either. It's going to be filmed in Montreal, Canada. That'd be a pretty big weekend jaunt for Lawrence.

It's possible that Lawrence will have some downtime between Joy and X-Men, and that she'll make the effort to sit in the Dancing with the Stars audience to support her on-screen sister. But it's more likely she'll be rooting for Shields the way Prim rooted for Katniss during The Hunger Games: from her home, while watching on TV.