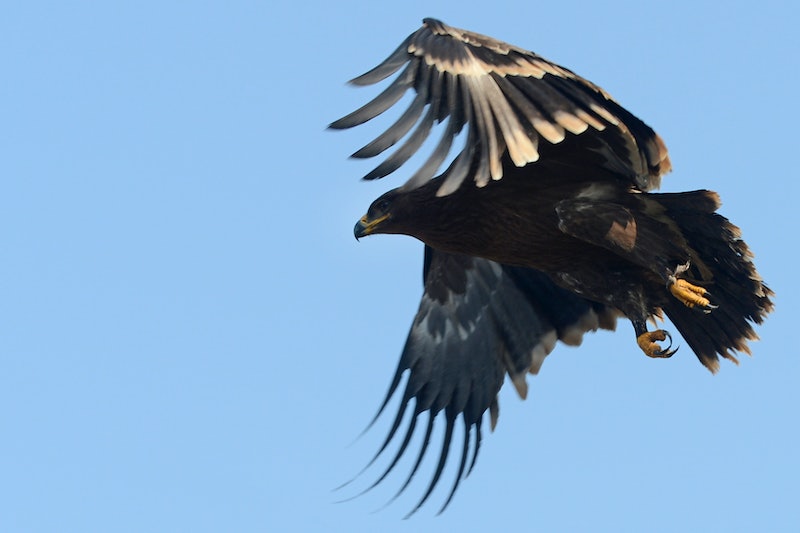 Who needs drones when you've got eagles? That's what someone at the Freedom Conservation probably said when they decided to attach a camera to an eagle and have it fly around the Burj Khalifa, the tallest man-made structure in the world, located in Dubai. That's some extreme use of a GoPro right there. The eagle, named Darshan, set the record for "the highest-ever recorded bird flight from a man-made structure", all in order for the Freedom Conservation to raise awareness for endangered birds of prey. It's quite a breathtaking collison of nature and technology, as Darshan flies about giving an incredible bird's eye view of man's most absurd creation, Dubai.

The video of Dershan's flight was live-streamed by BBC News, and is a reminder that flying is the coolest of the superpowers, and yet we're surrounded by tiny dinosaurs that do it every day. So this is probably the least boring way an animal rights group has ever advocated for a species; Even the most cynical, apathetic members of our society can be moved by crazy GoPro footage. Yes, it's true: There are people out there who care more about extreme views than species extinction. Such is life. Watch Darshan's jaunt around the Burj Khalifa below:

If you're now hooked on the idea of unique views from cameras strapped to animals, I've got you covered. Prepare to spend your Monday morning in a state of complete distraction. Here are five more animal pals wearing cameras to give us their POV:

1. This cat who got into a terrifying fight and caught the whole thing on film

2. This dog who will break your heart waiting for his dad to come home

3. This baby elephant munching on some branches

4. This brown bear out for a stroll in the forest

More like this
If You Have Pets, You Probably Don't Realize You're Making These Common Mistakes
By Mackenzie Edwards
Anguilla Is The Under-The-Radar Caribbean Destination You Need To Visit
By Rachel Lapidos
7 Dos & Don'ts To Follow For The December 2022 Full Moon
By Brittany Beringer
Here's How To Support Jewish People Amid Rising Antisemitism
By Hannah Orenstein
Get Even More From Bustle — Sign Up For The Newsletter