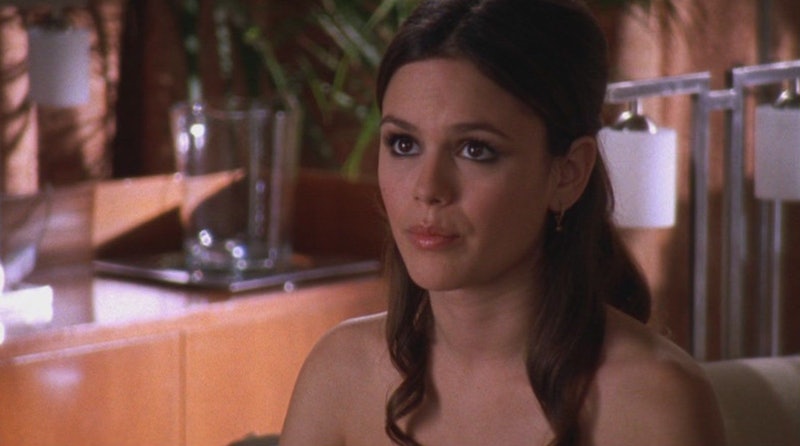 If you've watched even an episode of The O.C. , you know it's all about that core four. Rebel from the wrong side of the tracks Ryan, all vodka and Chanel Marissa, insecure emo dreamboat Seth, and the ever-precious Summer. Somewhere out there, there's a quiz or six that'll help you determine which of these drama-addled teens you relate best to (or if it's a rogue contender like Taylor Townshend or Sandy Cohen's eyebrows). But let me save you the time and help you determine what you're really wondering: "Am I the Summer Roberts of my friends group?"

I have to admit, when I first started watching The O.C. I wasn't so instantly infatuated with her ala Seth Cohen. Up until the gang's trip to Tijuana I found her vaguely insufferable. But over time, she absolutely won my heart. Nothing was more rewarding than seeing the pint-sized princess of Newport Beach morph from a shallow caricature of a valley girl to an activist out to save the world. So rest assured, being the Summer is a big positive.

In order to help you out, I've compiled a list on how to determine if you are, in fact, the Summer in your immediate friends group. After all, we've already knocked out the possibility of you being the Marissa. Because if you were the Marissa, you'd be dead.

OK, but seriously, here are some helpful clues to figure out if Summer Roberts is your true self.

1. People are constantly underestimating your intelligence.

Like I said, it was hard to take Summer seriously for the first half of Season 1. But she proved to have a lot of... what do you call it... potential. When your the Summer of your group, people tend to not take you very seriously, even though beyond your bubbly demeanor and pretty face you have the mind of a truly innovative thinker.

2. ... But your best friends know you've been dolling out pearls of wisdom for years.

Even if they sometimes take you for granted, those closest to you recognize that every once in a while, you'll make an observation or comment and it'll be the realest thing in the world. That hidden brilliance comes to the surface with some killer real-talk lines.

3. You have a mean streak that is 75 percent of the time socially inappropriate, but always 100 percent hilarious.

It's very plausible you don't have the greatest filter when it comes to saying what you think. As in, you literally just say what you think. Consequently not every insult lands with the grace of a gymnast, but your friends still find you amusing for being so unfettered.

4. And your temper is a force to be feared.

God help anyone who messes with you or your kin.

Summer momentarily broke up with Seth Cohen because her father didn't approve. Seth Cohen, you guys.

6. You have... unconventional taste in men.

Or perhaps it takes time to win you over, and the person who has your heart is a bit of a dark horse contender. Which is fine! Date outside of social expectations! There are bagels at the end of that rainbow!

7. And you use unconventional means of acquiring them.

Seth can stand on his coffee cart all he wants, but Summer was the queen of grand gestures, whether it's donning a Wonder Woman costume, or saving Chrismukkah. Summer always knew how to put her own creativity and thoughtfulness to make something extra special.

8. You are constantly fashion forward.

You collect "What a cute outfit!" compliments like they're Pokemon cards.

9. Your loyalty to your best friend never falters.

You're always there for her, whether it's to buffer an outing with an ex, or holding her hair as she's throwing up from a bender. At three in the afternoon. At school. Again.

10. You know how to take a walk on the wild side without giving the guided tour.

I still think that stealing two glasses of champagne versus stealing a bottle of vodka is pretty much accurate metaphors for Summer and Marissa's brand of rebellion. You're no prude and you know how to have fun, but you never treaded on life threatening territory.

11. You are an ally to plants and animals alike.

Maybe this is on the grand scale, like raiding an animal testing lab, or maybe this is on a smaller level, like loving your corgi as much as Summer loved Pancakes. Either way, you have some sense of being environmentally conscious, and that should not be undervalued.

12. You are undeniably adorable.

Don't deny it, own it. That's what Summer did.

More like this
“The Door Is Always Open” For Another 'Breaking Bad' Spin-Off, Says AMC Boss
By El Hunt
'The Summer I Turned Pretty' Using “Cruel Summer” Has Twitter Begging Taylor Swift To Release A Music Video
By Radhika Menon
'The Summer I Turned Pretty' Book Ending Is An Emotional Rollercoaster
By K.W. Colyard
All The Sneaky Lindsay Lohan Movie Easter Eggs In Her New Ad, Explained
By Stephanie Topacio Long
Get Even More From Bustle — Sign Up For The Newsletter