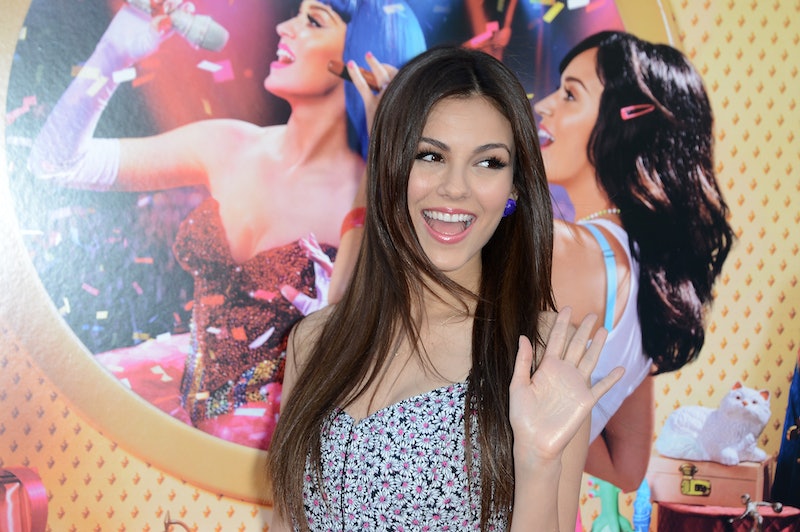 Hot alert! Victoria Justice on the cover of Kode magazine looking all grown up — and super sexy. Like, so hot she is smoldering. She's also wears a high slitted skirt with nary a panty line in sight. Justice channeled Marky Mark for a recent issue of Seventeen and now fronts Kode's Issue 5, which lands on stands on March 18. I did a double take when I first saw it, because the Eye Candy actress looks even more sultry than I'm used to seeing. I mean, she's always pretty, but there's a scorching quality to her stare and her attire in this cover shot.

Justice is also totally Minka Kelly's doppelganger in this image! That's actually who I thought it was at first. And since Kelly is a dead ringer for Gossip Girl star Leighton Meester, one could say all three of them resemble one another.

But beyond that, Justice rocks a glossy black bra top with some gold embellishment, hair jewelry, and a skirt with such a high slit that it shows thigh and cuts to her hip. The starlet is not known for being particularly daring on the red carpet, but she isn't afraid to go short and tight, either. She is 22 now, and has clearly moved on from her Nickelodeon roots. Justice has it and she is just starting to flaunt it.

The cover is below. Given what we see, it's not inappropriate to assume she ditched the undies to shoot this photo. It's actually a classy way to go commando. Really! Justice is still fully covered up, shows just the right amount of cleavage, and the sexiness is about what you don't see, not what you do.

Granted, a panty line could have been Photoshopped, edited out, or be hiding under her strategically placed hand, but still! Justice's cover is super hot, because it benefits from the power of suggestion.

She does have a signature and that's showing off her legs.

See? Justice isn't afraid to let her gams be the center of attention, because they are amazing!

The girl has great stems.

I love seeing Victoria Justice swap out those minis she loves for a two-piece that shows skin differently!

More like this
Florence Pugh’s Governors Awards Naked Dress Is Straight Off The Runway
By Sophie McEvoy
Here Are All 703 Outfits Rachel Wore On Friends
By Kat George
Dua Lipa On YSL Beauty, Plus Her Fearless Approach To Hair & Makeup
By Erin Stovall
Hailey Bieber Just Wore A Dress Covered In Piercings For Miami Art Basel
By Dominique Norman
Get Even More From Bustle — Sign Up For The Newsletter