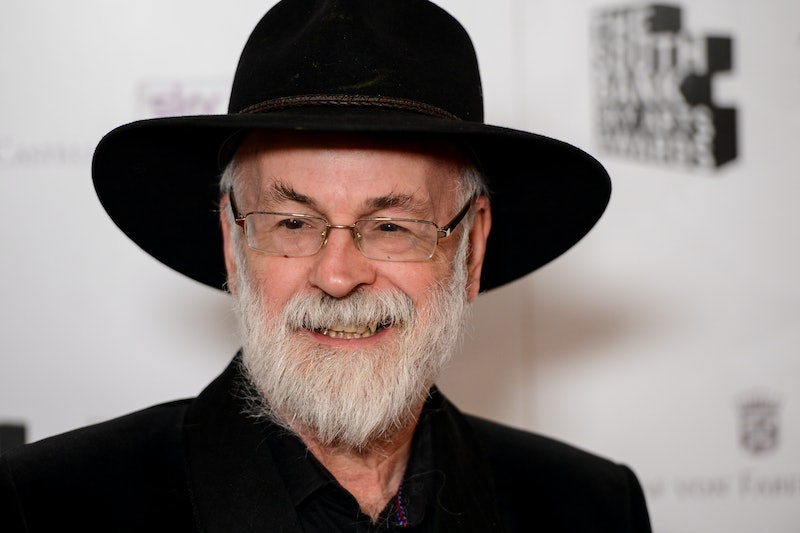 The literature and fantasy community is still reeling over Terry Pratchett's death — he was an icon. And though fans can still keep him alive by reading his essential works, they soon will have another book to add to that pile. Pratchett's The Shepherd's Crown will be published this fall, as the author finished working on it the summer before he passed away. And get even more excited, because The Shepherd's Crown will follow one of his most beloved characters, the young witch Tiffany Aching of his famous Discworld series.

Prachett announced on Twitter last July that he would be working on his fifth Tiffany Aching novel, but with the writer's recent tragic death after his battle with early onset Alzheimer's, the status of that novel was unknown. Artist Paul Kidby was working with Prachett to illustrate the artwork within The Shepherd's Crown, and he confirmed to i9 that the book was still progressing along the predicted timeline and would be available this fall, by all accounts, though there is no publication date yet set in stone.

It's hard to overestimate the influence Prachett's Discworld series had on the fantasy and science fiction genre. The wholly unique series was set in an alternate universe, one balanced atop a flat, round disc, itself balancing on four elephants atop a giant turtle in space. I'm not even sure what feat of imagination brought that idea to life, but we will forever have Pratchett to thank. Tiffany Aching is a killer heroine, who faces real trauma and obstacles along her witchy career path, but whose wild spirit is contagious. She is fiercely protective of her homeland, has read the entire dictionary, speaks many languages, and is literally friends with fire. Basically: She's awesome.

The last Discworld book featuring Tiffany was 2010's I Shall Wear Midnight, the fourth Tiffany book and the 39th overall Discworld book. There's no word yet on where The Shepherd's Crown will pick up in Tiffany's story (when we last saw her, she was 16), but we're all dying to know.