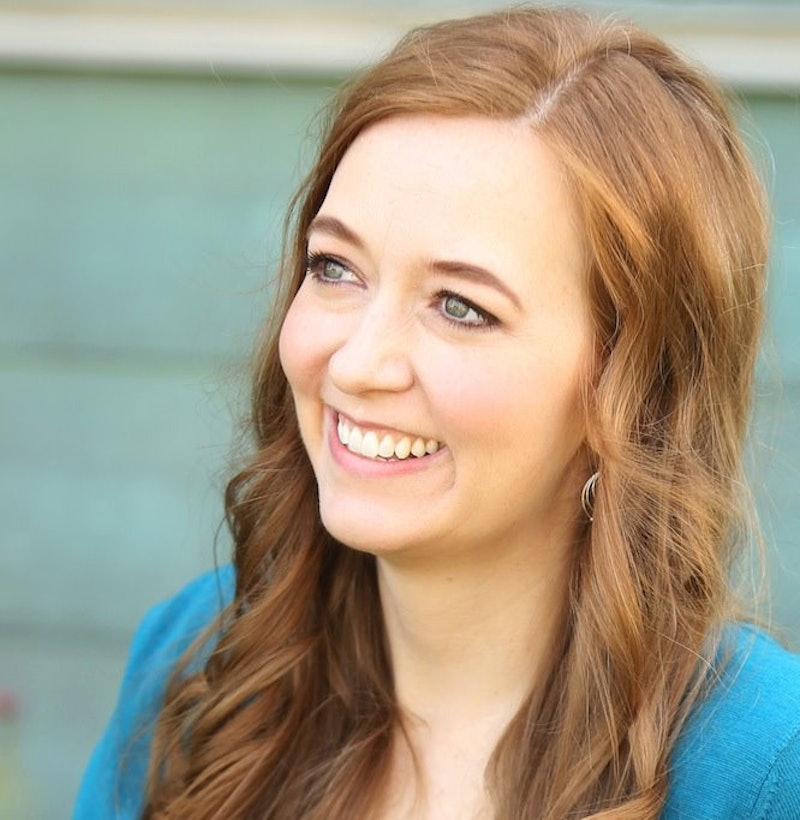 It's hard to believe it's been 10 years since Shannon Hale released her Newbery Honor-winning Princess Academy, starring the whip smart, determined princess-in-training Miri. Hot on the heels of the anniversary, Hale returned to the Princess Academy universe with the third book of the series, The Forgotten Sisters, where the tables have turned and now Miri is tasked with training the next generation of potential princesses. But if you haven't read these books, don't get the wrong idea about princesses. These girls are crackerjacks, and as Miri will come to find out, some are a bit more rough and tumble than the palace is used to.

Hale recently made headlines with a blog post called "No Boys Allowed: School Visits as a Woman Writer." I spoke with Hale about the well-rounded female characters that populate her book universes, but why, as she says in her blog, she never wants her stories to be seen as "girl" books.

Painting realistic young female characters has always been crucial to Hale, who never falls into the stereotypical damsel in distress princesses we constantly see elsewhere.

Whenever I'm writing characters, my goal is always to make them feel like real people. I never thought that Disney's Snow White was a real person. Disney's Sleeping Beauty is not a real person. They're an idea of a certain kind of femininity, but they don't feel like any girl or women I know. Whether or not someone is a princess, they're a human being.

So yes, female characters tend to run the show in her stories, including Princess Academy, as well as her first book ever The Goose Girl, Austenland (which you may also know from the Keri Russel movie), The Princess in Black children's book series she writes with her husband, and the YA novel Dangerous. But no, her books are not just for girls.

In her blog post, Hale described a school visit where she was scheduled to read aloud from The Forgotten Sisters to students from third grade up to the eighth. During her talk, Hale would also discuss what it means to be a writer, take questions, and sign copies of her books. But she noticed that the older grades, the rows in the back, were filled with only female students. The school had only given permission to the young women to come see Hale speak. Hale told me she was not going to release the name of the school because, frankly, one school is not the point; rather, it's a "symptom of a much more widespread and consistent problem" that she and other authors can personally speak to:

Showing that they believe that women only have something useful to say to girls, whereas men have universal voices and stories. And that particular belief is widespread. I've seen thousands of examples of this in my career, where because I'm a woman and I write a book where the main character is female, then my books must only be for girls. Whereas men I know write male main characters, and half or more of their readership are girls.

Hale added that she knew plenty of male authors who toured schools, often with books featuring male characters, and has never heard of only male students given passes to the assembly. But this isn't just about embedded sexism in the industry and in the culture of a whole — though it very certainly is sexism, no question — Hale is concerned about what this pervasive attitude is doing to young men growing up in our world. On one school stop, Hale tells of a boy who was a fan of one of her books, but he was too embarrassed to ask her to sign it for him, instead sending his mother over to ask. Well, of course he was; the school had already deemed Hale's books as strictly for girls. It's something Hale believes is "a tragedy."

Their parents right in front of [sons] will say shaming things. They'll get one of my books signed for all of their daughters, but there will be a son there and I'll ask, "Does he want a book signed for him," and they'll say "Oh, do you want your name in a girl book?" And of course, they'll say no. It's heartbreaking.

We, as adults and gatekeepers to what children absorb, are only enhancing the gender divide. If we teach young boys to be ashamed of interested in something that's deemed "girly," we're hurting both women and men in the future, Hale argues:

We know from research that one of the best ways to develop empathy for people different from themselves is to read about them, to read a novel from someone else's point of view. Girls are growing up learning to empathize with boys, but boys are not only lacking the chance to empathize with girls, but they're being told that they should be ashamed if they do....And then they're growing up in a world where half the population is female. How do they navigate this world? How do they interact and have relationships and work with female coworkers? What weird ideas are they getting about girls that not only is it not their job, they shouldn't try to empathize with them? They shouldn't try to understand their stories and their thoughts.

But how do you stop a widespread and consistent problem that plagues so many corners of our culture? For starters, Hale has a very basic idea: Offer female authored and female character-driven stories to boys. This should sound like the ultimate no-brainer, but surprisingly (or unsurprisingly, depending on your current levels of optimism), it never seems to happen.

"Parents, grandparents, teachers and librarians think nothing of giving books about boys to girls, but it's extremely rare that gatekeepers offer books about girls to boys," Hale says. "The discrepancy can't be overstated."

You've probably all heard of this "crisis" of how young boys aren't reading. (Seriously, Google the phrase "boys don't read" and see just how many articles pop up. It will blow your mind.) The idea seemed to pop up a decade or so ago, according to Hale, which sparked massive debates about how just we're going to get boys to read. The solution: Give boys books you know they're going to like. And what they decided, Hale says, is that boys will definitely like books about boys. But that notion has gotten progressively skewed, only worsening existing problems and taking away from the noble cause of fostering a love of reading in children and young adults.

We're talking the issue of "gendered books." you know the ones, the pretty, pretty pink princess books for girls and the action-adventure superhero books labeled "for boys." But sometimes our gendering books is more discreet than that. As Hale says, if a librarian or parent offers a boy three boys, it's likely those three would all be about boys. And if there is one about a girl? Hale says, it's all too common for the selection to be prefaced by " "even though this is about a girl, you're going to like it."

The truth is the surest way to get somebody to read a book is to offer them something they would be interested in. The way a person enters a story is not necessarily by reading about a main character who is exactly like them, it's by reading a kind of story they like to read. ... If there's a book full of mystery, adventure, and excitement, a boy who is interested in mystery, adventure, and excitement is going to be interested in that book whether or not the main character has an XY chromosome set. Sex is not the only way to empathize with a main character.

Don't apologize for offering a boy a book with a female character, we never do offering a girl a male character-driven story. Let boys see, Hale says, that not only is it OK you want to read a book about a girl, it shouldn't cause any waves at all.

To combat this sexism issue, Hale also advocates for schools to start to invite more female authors as speakers, and for book conferences to ensure that their panels have female voices. Because let's face it, Hale copes with this attitude all the time, but when is the last time you had to say to a young girl, "See, Harry Potter is about a boy, but you might like it anyway..."?