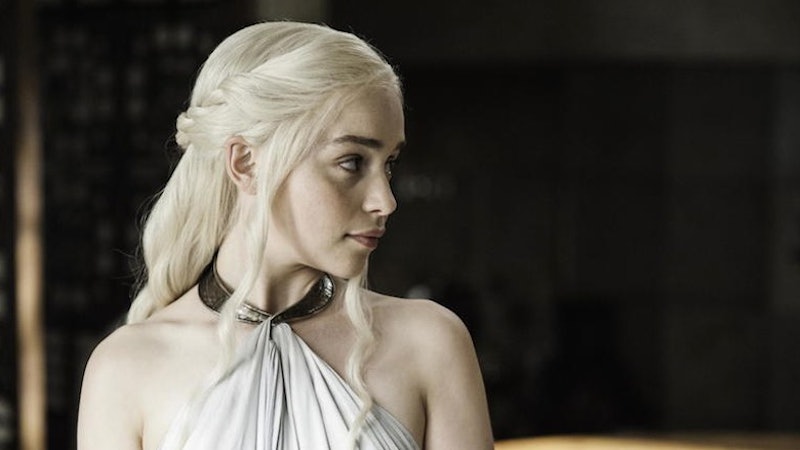 Can we all come to a consensus that we should change the title Game Of Thrones to Dame Of Thrones? Because honestly, who cares about anyone but the women? In this new 30-second teaser trailer for Game of Thrones Season 5, HBO further confirms that the new season will be all about the ladies — because there ain't no shame ladies, do your thing. In the last trailer, we saw Danyras declare "I'm not going to stop the wheel, I'm going to break it," with regards to the endless cycles of ruling families in the seven kingdoms. We see Arya up and bounce to Bravos, and the sand snakes come back to avenge their father Oberyn. The girls are mad. Hell hath no fury like a woman scorned, and hell REALLY hath no fury like the women in Westeros who are just fed the eff up.

Here are eight moments from the new teaser that have me even more excited for all the imminent girl power on Season 5. And before you naysay and say, hey, wait a minute, the trailer is only 30 seconds long — how could you possibly pick eight moments? I'll have you know that not only was it possible, it was easy.

In the first moments as Varys voices over, we see Dany and her handmaiden Missandei surrounded by men with weapons who don't look too happy. This might seem like a negative but damn, Daenyers is so powerful that entire armies are after her. And she does it all while somehow maintaining a pristinely white gown. Varys says: "I believe men of talent have a part to play in the war to come. The seven kingdoms needs someone strong — a ruler loved by millions with a powerful army and the right family name." Which leads us to...

Damn girl, looks like you're ready to start sharp-swording again. Arya is one of the most badass characters on the show, and if you don't think so, you can see yourself out through the moon door. She's DEFINITELY got the right family name — even though most of her family is gone now. :(

Who's this mysterious woman being reached out to in devotion!?

Cersei always seems like she's marching somewhere with determination followed by heavily armored guards, but who cares if she does it a lot? Just proves she's got the power. This is a slick power move.

Good ol' Maergery is finally queen and that icy stare has me thinking she certainly has some tricks up her sleeve.

Tyrion's all fed up with the war, and drinking heavily, and when Varys is all, "We need the right ruler," Tyrion's all snotty and cynical like, "Good luck finding him."

Varys Is A Feminist!?

And then Varys claps back like "Who said anything about him?" Damn, though. You know Varys knows more than just about everyone else in the seven kingdoms, so this statement is not to be taken lightly.

We end on a shot of one of Dany's dragons breathing serious fire that explodes into the show's title. We're always gunning for the dragon queen.

Here's the full trailer if the detailed play-by-play wasn't enough, because you probably need whatever scraps you can get to sustain you until the premiere on April 12.