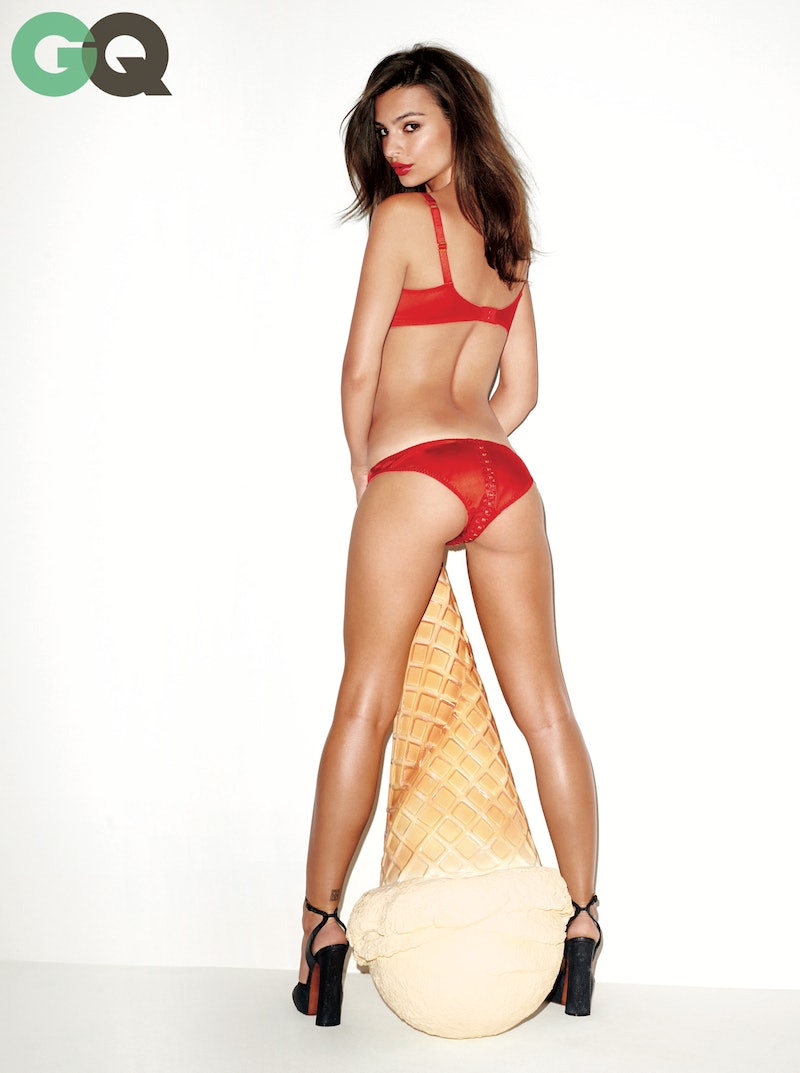 You know what's sexier than just having a woman slink about your photo studio barely dressed and feelin' frisky? Having her put food next to her vagina. Because women are like food, and also sex is delicious, and innuendos about eating women out are HA HA HA so clever and sexy and cool! Not to mention oh-so-totally edgy and completely innovative! At least Terry Richardson thinks so in his latest spread for GQ Magazine with "Blurred Lines" Music video star Emily Ratajkowski. Every single photo (save one of abject originality: Ratajkowski with a rocket between her legs) is of the model/actress with a food item in between her thighs. This is sex and art. And given his Miley-Cyrus-with-an-iced-tea-dick pictures, we have to concede to his expertise on the matter. A-hyuck.

But, I mean, it's all in fun, right?! Maybe Richardson is actually doing something more intellectual than we're giving him credit for. After all, we have access to the totally real and totally not at all fake* thoughts going through Ratajkowski's mind while the photo shoot was going on:

"The historical origins of ice cream are so fascinating, aren't they? The Persian empire invented sno-cones and fruit ices, the Chinese had frozen milk and ice, and the panethnic Arabs of the 10th century were the first ones to add milk and sugar to theirs. And today we mark that culinary innovation by putting a cone between my legs. Pointy end up!"

Okay, but really, as much as we respect GQ's ability to get headlines (like this one), we've got to level with Richardson here. How many times must we equate women with food, as if we didn't already have an problem with the visual representation of women in media? Not to mention the representation of women's bodies and weight in media, bullshit that continues to feed this insidious opinion that ladies are all just lust objects made for male consumption. And guess what, Terry? You're partially responsible.

Because, unfortunately, this stuff isn't just all in fun. (Oh no! A lady opinion on the way we treat ladies in media: ruuuuuuun!) I mean, sure, maybe to Terry and even to Ratajkowski herself, it's all ha-has and hee-hees. Because it's so fun to take pictures that make you feel adored and sexy and desired (or so we've heard)! But when you're creating for a mass audience, and your images are shown without the lens of your own political/artistic/sociological intentions attached to it, it's going to be viewed by a huge swath of people on its basest, worst level. And sometimes some in the swath don't even realize how they're interpreting it. They'll just see it and store it back in the noggin' as, "Yeah, see? Why can't ALL girls look like this, or act like this, or get that it's all in fun?" Because, like it or not, the human mind is a totally kooky and sometimes not-at-all controllable thing, and when you constantly assault it with visuals like this, you're inevitably going to inspire some unsavory thoughts.

Still, at least we learned a little bit about ice cream today.

*Yeah, you guessed it: this is totally fake.

More like this
Long Live Bennifer!
By Allie Jones
Why The '365 Days' Sex Scenes Are Good, Even If The Movies Aren’t
By Arya Roshanian
Sandra Bullock, Girlboss Extraordinaire
By Matt Harkins & Viviana Olen
Twitter Is In Utter Meltdown After 'Derry Girls’ “Poignant” Finale
By Sam Ramsden
Get Even More From Bustle — Sign Up For The Newsletter