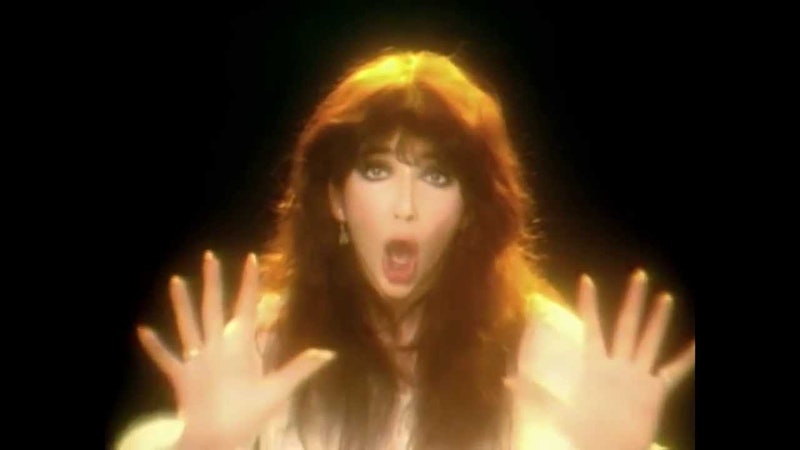 When Kate Bush announced that she would be giving a concert series last year—her first time performing on a live stage in 35 years—the tickets for the show sold out within 15 minutes. In 2013, more than 300 fans gathered, in costume, to reenact the British singer-songwriter's 1978 video for “Wuthering Heights.” To put it mildly, Kate Bush fans are devoted. Bush, now 56, might seem like an unlikely candidate for such popularity; Her music, not to put too fine a point on it, is weird. It doesn’t follow the typical sounds and structures of popular music; Bush’s voice is often high to the point of shrieking; She takes on bizarre subjects ranging from nuclear fallouts to washing machines; And her melodies are often interrupted by spoken lyrics, disjointed rhythms, and the sounds of breaking glass, trains, and other non-musical objects. But her music is also beautiful and haunting—it’s precisely its strangeness that makes it so compelling, and so inescapable. Her songs lack the “hooks” that typify pop music, and yet many are incredibly catchy, the sort of songs that you’ll find stuck in your head for days—and you won’t mind it because they are just that good.

Bush is considerably more well known in Britain than in the United States. With 16 singles hitting the top 20 in the UK charts since the beginning of her career, she has remained a force in British music for well over three decades. Below I’ve compiled what I think are her best tracks. If you’re already a fan, feel free to sing and dance along. If you’re a Kate Bush-newbie, consider this your starter pack. If you're anything like me, the first time you hear some of these songs, you might think, "Huh? What the hell am I listening to?!" And then you'll listen again and think, "Actually, it's kind of amazing." By your 20th time through, you'll be convinced that Kate Bush music is your lifeblood.

Written when Bush was only a teenager, “Wuthering Heights” launched the musician’s career, becoming a #1 hit on the UK singles chart in 1978. Inspired by Emily Brontë’s novel of the same name, Bush’s song takes on the perspective of Catherine Earnshaw’s ghost, clamoring at Heathcliff’s window. Although Bush had apparently never read the book when she wrote the song, she perfectly captures the novel’s gothic creepiness:

Also, this video. I love it so hard. Bush is famous for the over-the-top theatricality of her music videos. As you’ll see, her songs are usually accompanied by elaborate dance sequences.

“Running Up That Hill” takes on a couple’s inability to communicate, asking, What if we could exchange perspectives? What would it mean to see the world through someone else’s eyes? Backed by an insistent, thrumming beat, this song is my current (and by that I mean forever) yoga jam.

My favorite Kate Bush song. It's about a grown-up son remembering his father being arrested by the authorities for trying to construct a rain-making machine. There’s a lyric about a glow-in-the-dark yo-yo. Yes, really. And it’s glorious.

How many of us have resisted falling in love, for fear of being hurt? In “Hounds of Love,” Bush is hunted by love, but, even in her fear, she realizes the necessity of making that leap.

“This Woman’s Work” portrays the pain and fear of having a loved one in crisis. “I should be crying, but I just can't let it show. I should be hoping, but I can't stop thinking,” Bush sings. It’s shattering.

The chorus to this song has Bush literally singing the number sequence of pi (3.14159265359…). Only Bush could make a bunch of numbers so haunting and emotionally resonant.

“Breathing” is about being a fetus during a nuclear apocalypse. That’s all you need to know.

Book nerds, here’s another song for you. These lyrics are pulled from Molly Bloom’s speech at the end of James Joyce’s Ulysses. Any Joyce fan will get goose bumps when Bush sings the novel’s iconic last line: “yes I said yes I will Yes."

This song is my newest Kate Bush obsession. I didn’t think much about it at first, but, as with many Kate Bush songs, it somehow managed to worm its way into my brain, and now I hear it everywhere. I don’t mind—when you have Kate Bush as a soundtrack, life just seems more interesting.

More like this
All The Best Celebrity Reactions At The 2023 Grammys
By Brad Witter
The Beyhive Is Mad At Harry Styles After Beyoncé’s Album Of The Year Snub
By Jake Viswanath
9 Photos Of Celebrity Couples & Unexpected Duos At The 2023 Grammys
By Jake Viswanath
This Surprise Song Of The Year Winner Beat Out Adele, Beyoncé, & Taylor Swift
By Grace Wehniainen
Get Even More From Bustle — Sign Up For The Newsletter
From hair trends to relationship advice, our daily newsletter has everything you need to sound like a person who’s on TikTok, even if you aren’t.