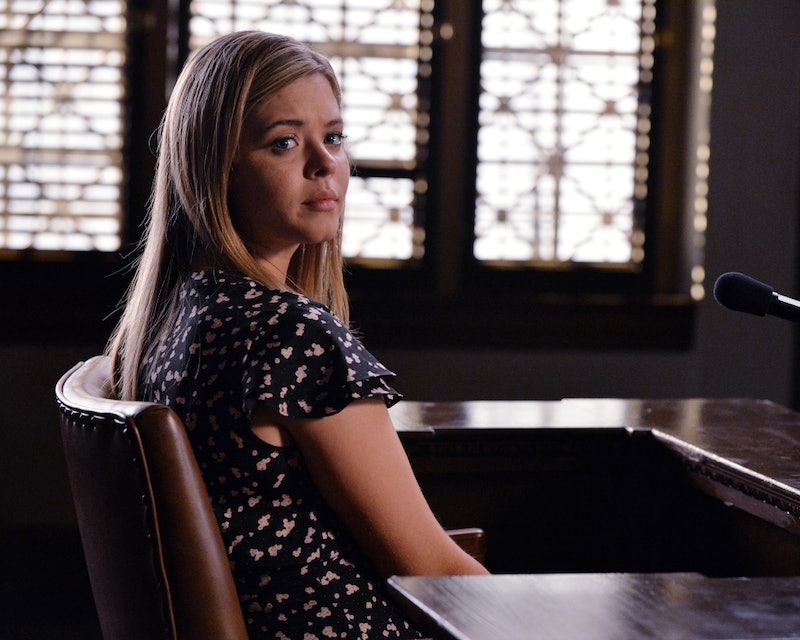 I can't say that I didn't see this coming — I mean, I've suspected Ali since her return to Rosewood — but the final moments of Pretty Little Liars Season 5's penultimate episode threw me for a loop. On Tuesday night's episode, the jury found Alison guilty of Mona's murder on PLL and then the remaining free Liars took their mugshots. That's right, thanks to sketchy-as-hell Detective Tanner, Spencer, Aria, and Emily are all joining Hanna and Ali in jail. Clearly PLL is bringing a whole new meaning to "a friend is someone who bails you out of jail, a BEST FRIEND is someone who's sitting next to you."

We've known for awhile that Tanner was building a case against the Liars and Toby confirmed it on Tuesday's episode with his beautiful speech about choosing Spencer over his job. But now that all of the girls are in prison, what does this mean for the A game? Between the blood and the clothes and taking down Hanna in the past few weeks, it was obvious that A was framing the girls for Mona's alleged murder (we still don't have a body, people, we can't take that detail for granted). And now that PLL's villain has all of the girls in one place, does that mean that the final stages of this five-season-long torment are coming?

Absolutely — the preview for next week's finale hinted that the least of the girls' problems will be the orange jumpsuits they're forced to wear (even though Emily will probably still look amazing). And if you're still wondering how and why Spencer, Emily, and Aria are sitting in jail cells alongside Ali and Hanna, keep in mind the fact that they decided — after being adamant about Ali being A and killing Mona — that they believed in her innocence and decided to help her. Tanner's been tracking them for months, she knows they were involved in anything and everything and attempted to prove Ali's innocence. Just like before her disappearance, Ali's got the gang back together now by getting them to trust her enough to keep her secrets — this time, however, it's behind bars and, possibly, enemy lines.