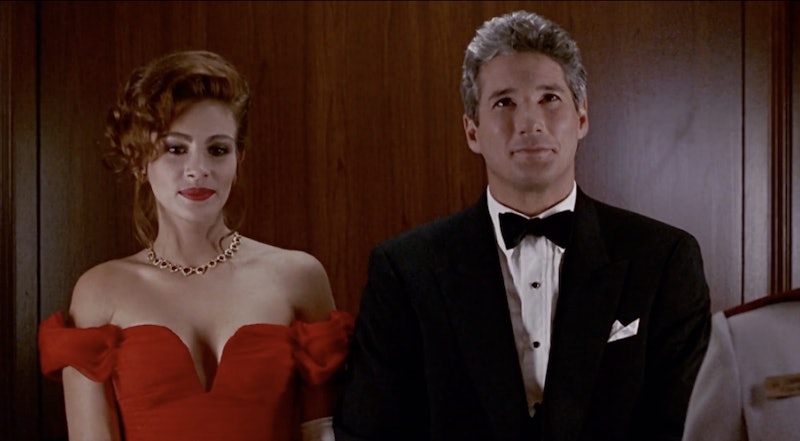 A rich man and a prostitute get a room in a fancy hotel. The result: not a tawdry punch line, but the fourth highest grossing romantic comedy of all time (and the highest grosser of rom-coms released before 2000). Pretty Woman did quite a number on pop culture upon release in 1990. It transformed Julia Roberts into America’s sweetheart and Richard Gere into a guy we would agree to put up with until right around Chicago, kept all commission salespeople in a perpetual cold sweat, and warmed the general public to the sex-working populace like never before. And now that the cast has reunited, we're reminded of the fact that Pretty Woman is without a doubt the biggest rom-com of the 20th century.

The story is a relatively straightforward romance about a wealthy gentleman falling gradually in love with his hired escort (with intermittent clawing cads and fire escape-scaling feats of bravery sprinkled throughout). But it began as something altogether different: the original concept for Pretty Woman would have treated us to no such happy ending, concluding a much darker line of events with Edward abandoning a drug-addicted Vivian on the side of the road for good.

So how then, from the seeds of this grim drama, did one of the most beloved and iconic rom-coms of the 20th century spawn? (It's not just the catchy song. Valid theory, though.)

Every effort was taken to ensure that Roberts’ character would be empathetic. Producer Laura Ziskin insisted on dropping the drugs and shifting some of her more base eccentricities over to supporting character Kit (played by Laura San Giacomo). Furthermore, the cold original title, $3000, was abandoned in favor of the much warmer and more humane Pretty Woman.

And even with the directing panache of Garry Marshall and a sharp script, we were nonetheless dealing with an affair between a callous fat cat and a streetwise hooker. How on earth did such an unlikely charmer work its way into our hearts for the decades yet to come?

It’s a matter of point of view. Some time in the late ’90s — right around Almost Famous, in fact — the infamous manic pixie dream girl was born. The tradition of enlivening an anchored soul through the boundless whimsy of an angelic sex symbol took hold of Hollywood. From then on, it became business as usual in Hollywood romance to align audiences almost entirely with one party as he (or, much less frequently, she) is taken for a ride by someone who barely resembles a human being.

A good decade before this trope became epidemic, Marshall exhibited the cure through his film’s unique vantage point. We don't enter Pretty Woman, a story about pretty much just what is described above, with Edward. We don't wait along with him for heaven-sent miracle Vivian to swoop in and color his life anew. We enter with Vivian herself, understanding her humanity long before Edward ever does.

That’s a big part of why Pretty Woman is such an unparalleled gem; it doesn’t feel the need to prove humanity or grounding in Vivian. It believes in it from the get-go, insisting against the established connotation with her line of work that she demands and deserves our sympathies outright. And because Pretty Woman is so sure of these, we never doubt it.

We, the mass audiences who ate up Pretty Woman, are more like Vivian than we are at all like anyone in Edward’s circle. How many of us know which utensil to use on shellfish? How many of us haven’t felt intimidated by stony-eyed store employees?

Before it ever entered the zeitgeist, Pretty Woman rejected the manic pixie dream girl. Instead of a superhuman fantasy figure brought to Earth to show us the magic of living free, it gave us something all the more valuable in Julia Roberts’ famed prostitute character Vivian Ward: a human being.