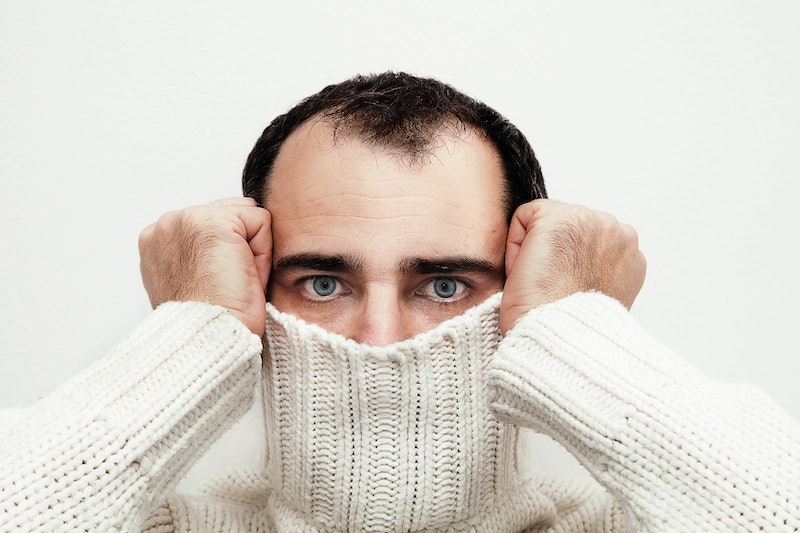 I don't have a particularly interesting sexual history (I've never slept with anyone who didn't grow up on the east coast, read a lot, and harbor a very strong opinion about Back To The Future) — but there is one quirk in my sexual past: I've dated a lot of guys with uncircumcised penises. They comprise one quarter of my total sexual partners, including one serious and one mega serious relationship. And they all happened at once — I went through a five-year period where I only saw uncut penises, and then I never saw one again. Now that I've settled down with a circumcised dude, the whole thing feels almost like a long, slightly hooded dream.

I realize that my experience sets me a little bit apart; I loved my time with uncut dongs, while supposedly, 54 percent of American women prefer a circumcised penis. Hey, I'm not gonna tell you you're wrong, or that you should be touching some different penises; but I will say that uncircumcised penises have an unwarranted bad rap in the States. A lot of women who have never encountered one in the flesh (as it were) are freaked out by the mere idea of a penis with a little bit extra — they fear that it will be dirty, diseased, and ejaculate in about 45 seconds. While we are all entitled to enjoy the boner style of our choice, we shouldn't be making choices out of fear — especially when those fears are pretty much unfounded. There's nothing to be afraid of when it comes to uncut penises. So sit back, relax, and join me for a trip through six of the most commonly asked questions about our fleshy friends down under. It's just a flap of skin, guys!

Who Has Uncircumcised Penises?

Historically, circumcision was a religious ritual for Jewish and Islamic families; and in the late 1800s, some doctors believed that it was the cure for paralysis. Circumcision became popular in the U.S. when childbirth moved from the home to hospitals in the early 1900s, with circumcision rates for newborns rising from the '50s through the '80s. U.S. circumcision rates peaked in 1981, with 64.9 percent of male babies in the country circumcised. The rate has bounced around since then, but is currently dropping, with current rates hovering around 58.3 percent. Researchers speculate that this is due to conflicting medical opinions on circumcision — the American Academy of Pediatrics, for example, has flip-flopped a bit over the past 40 years on whether circumcision is good for all babies, most recently extolling some benefits of circumcision, but stopping short of outright recommending it.

Do Guys With Uncircumcised Penises Really Have More STDs?

However, none of this is a reason to start panicking if you find a little extra tubing in a dude's shorts; though some of this research has postulated that it's easier for men with intact foreskins to contract some STDs, this doesn't mean that most men with foreskins have STDs. Think of it more like the way that women are more likely to contact STDs than men, due to the construction of our vaginas — our equipment is more vulnerable, but that definitely doesn't mean that all women have STDs. And so it goes for uncircumcised penises. Just make sure to wrap up any uncircumcised penises you meet the same way you would with any circumcised penises, and you'll be good to go.

Does Having Sex With An Uncircumcised Penis Feel Different?

Some people claim that intercourse with an uncircumcised penises feels different, and one study out of Denmark reported that women with uncircumcised partners were twice as likely to enjoy themselves in bed, and were three times less likely to experience sexual pain. As someone who once enjoyed the aforementioned five-year uncut hot streak, I never felt a difference. Many people report that their uncut partners are more sensitive in bed, which I do agree with; but I mostly found it to be a plus (who doesn't want to feel like they're doing a great job?)

There's a lot of talk about uncircumcised men being less likely to receive oral sex, but most anecdotal research hasn't shown that most partners of uncircumcised men are avoiding it. Again, personally, by the time oral sex is on the table, a dude is totally erect and you really can't tell the difference, so if you ask me, there's not really any reason to be shy about it. If you ask me.

Do Uncircumcised Penises Get More, You Know, Funky-Smelling?

Uncircumcised penises can have a distinct smell. But that depends on the specific hygiene habits of the penis-owner — smegma can collect under the foreskin if it's not pulled back and washed while your dude showers, and that can give their junk a pungent or musty smell. And smegma isn't just awkward-smelling — letting it build up can make a guy more prone to infections. But smegma build-up isn't inevitable for uncut guys — if he's keeping his junk clean, it shouldn't be any smellier than anyone else's junk.

Should I Do Anything Different Sexually With An Uncut Guy?

Hey, you're the one who's looking at his penis — ask him yourself. Some uncircumcised guys will want to be stimulated in ways that incorporate their foreskin, and some won't. A good rule of thumb is to put yourself in your uncut guy's shoes/ pants — you wouldn't want your new partner dismissing your fun business as freaky or weird-looking, so it's nice to give uncut dudes the same benefit of the doubt, too. Just keep a cool head, and you, too, can someday write an article informing the Internet about your vast body of uncut wiener knowledge.