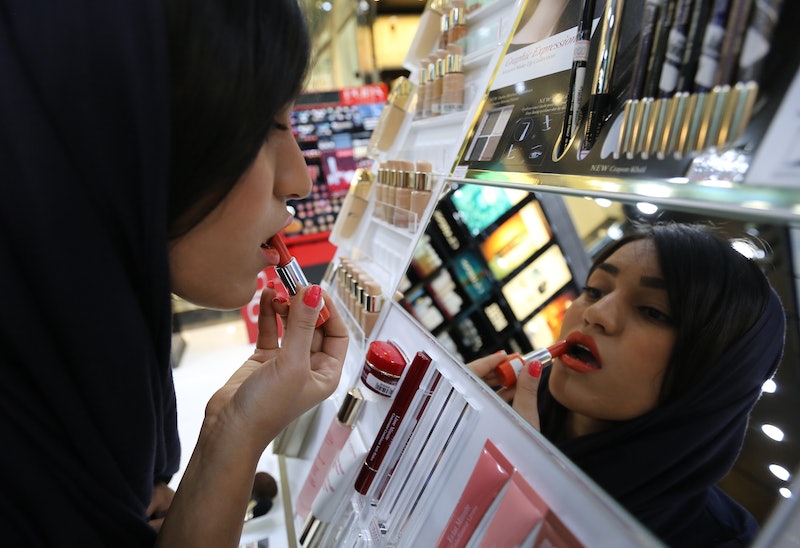 If there's anything I've learned about beauty during my somewhat short existence, it's that trends come and go. From the hottest hairstyle to the best liquid liner look, things are constantly changing in the beauty world, especially when it comes to makeup do's and don'ts. And like any normal makeup-obsessed human being, you want to try them out. So, you buy everything you need, post up in front the mirror, and perfect the style, only to read how "so last week" the cat eye is. Greaaat. But what if you could just throw the finger to all of the ~**TrEnDs**~ and wear what works for you?

That’s what celebrity makeup artist Lori Depp thinks you should do. After being in the game for 30 years, she quickly realized how little makeup trends (and rules) mattered. She’s dolled up everyone from KISS to Jessica Alba (and yes, was once married to Johnny Depp), so she knows a little bit (OK, she knows everything) about makeup. And in her opinion, following trends and rules is the worst thing you can do. “If it doesn’t look good on you, don’t do it,” Depp says. “But if it looks good on you, no matter when it’s from, then do it.”

She compared makeup rules to wearing capris. “Not everyone can wear capris,” Depp says. “Since I’m really short, when I wear them, they make me look even smaller. But when someone taller wears them, it looks fine. The same goes for certain makeup tricks.” So instead of attacking them all, here are Depp's 7 makeup rules to ignore.

IMHO, I hate that this has even become a thing. And like me, Depp thinks this one needs to be forgotten forever. “The average person shouldn’t walk out of the door all contoured up,” Depp says. “I would recommend that you use your bronzer and your blush, accordingly.” And to Depp, that means that if you can tell you’re wearing makeup from ten feet away, you’re wearing too much. “You want dimension, but you don’t want it to look like a mask. People have taken it to a level that’s unrealistic.”

This has been a rule forever because in the past, having both things so done up can look too heavy. But Depp disagrees. “Eyes and mouths are the first things that people look at when they see you, so why not go big?”

3. "Glitter Is For Children"

Depp has revolutionized the way grown-ups wear glitter: by mixing it in with her lipstick. That way, it comes across a little more subtly, while still maintaining its fun factor. And as much as I like this idea, I think everyone should remember how out of hand glitter can get, so attempt with care.

4. "Black Eyeliner Is Too Much For Everyday"

For years, I’ve heard that wearing black eyeliner during the day isn’t OK. And although I heard this mostly from my mother, I started to believe it. But Depp says that if you do it right, you can pull off almost anything – black liner included. And if you do feel like it’s too harsh for daytime wear, mix it in with a little brown liner to tone it down.

5. "Fill In Those Eyebrows"

Everyone has seen those overly drawn eyebrow memes that are floating around, but unfortunately, that's how some people think eyebrows should really be done. Let me just say this: Please stop overfilling your eyebrows. “You should maintain the shape of your brows, and worry less about filling them in,” Depp says. She also urges people to make sure they’re really using the right color.

Since I’ve always picked a shimmery bronzer over a matte one, I didn’t even realize this was against the rules. Hinting at the same vibe as the glitter rule, Depp just says to make sure it isn’t overdone. She also thinks skin tone and texture is very important to consider when choosing a bronzer because mattes do a better job at hiding imperfections.

If you’re a Kylie Jenner fan, you’ve been breaking this rule for a while now. But there are some people who still aren’t convinced. Depp is not one of them. “At least every time I leave my house at night, I have lip liner on,” she says. Using a trick similar to Jenner’s pout perfecting liner move, Depp is known for creating a shadow on both the upper and lower lips. And her favorite liner? “Wet n’ Wild 666 Brandy Wine. It’s a dollar and will last you years!”