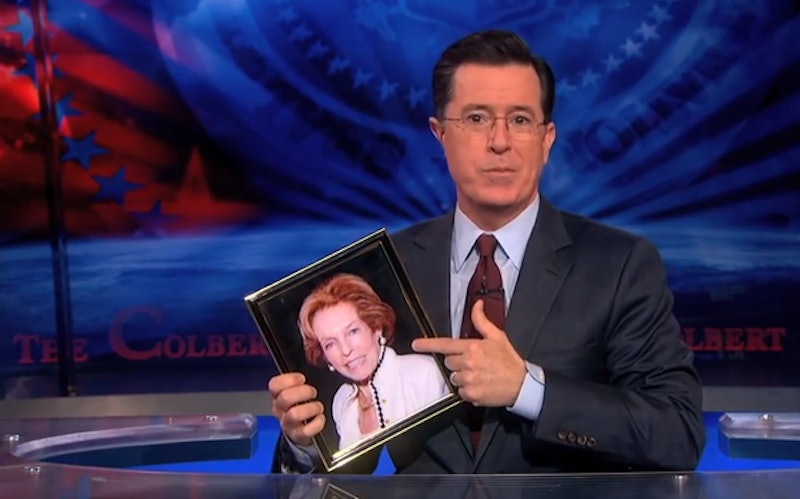 Since joining The Daily Show in 1997, Stephen Colbert took on a new identity. His faux-conservative pundit attracted legions of fans with The Colbert Report in 2005 — even though very few really know what the real Colbert is like.

Which is why it was breathtaking to watch Colbert pay tribute to Lorna Colbert, the host's beloved mother who passed away at 92 years old June 12. Though the host very rarely breaks character, Colbert nearly broke down several times when discussing Lorna, a remarkable woman who delivered 11 children, including one of the funniest men on television.

"If you watch this show, and you like this show, it’s because everybody who works here and I’m lucky to be one of them," Colbert started. "But when you watch the show, if you also like me, that’s because of my mom."

Colbert continued, "I know it may sound greedy to want more days with a person who lived so long, but the fact that my mother was 92 does not diminish, it only magnifies the enormity of the room whose doors have quietly shut ... When I was leaving her last week, I leaned over and I said, 'Mom, I’m going back to New York to do the show,' and she said 'I can’t wait to see it. I wouldn’t miss it for the world.'"

This isn't the first time Colbert discussed his mother — the host memorably saluted her strength after a health scare in 2012:

More like this
'Waterloo Road' Is Back, With More Than A Few Familiar Faces
By Sam Ramsden and Vivian Iroanya
Hugh Jackman Shared The Sweetest Tribute To His “Extraordinary” Wife
By El Hunt
Haim Reacts To Stevie Nicks Wanting To Sing Their Song To Christine McVie
By Radhika Menon
Matt Hancock Broke a Major Rule With I’m A Celeb
By El Hunt
Get Even More From Bustle — Sign Up For The Newsletter