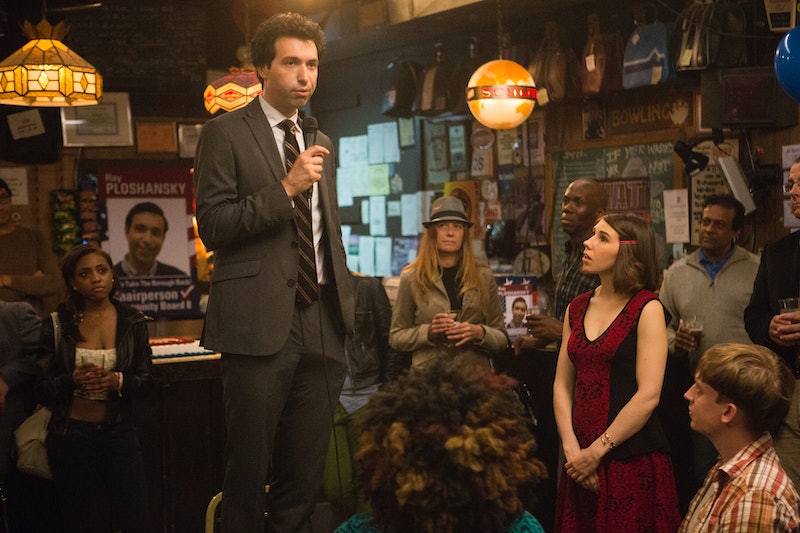 Girls aren't everything on Girls. Sure, we follow four women in their twenties around New York who are trying to become who they're going to be in life (see: adults), but the show is almost more about those women and how they interact with the supporting characters in their lives, whether they be boyfriends, coworkers, parents, dentists, taxi drivers, etc. And in a way, the show is just as much about the men on Girls as it is about the titular girls.

The Girls guys all come from different walks of life, which helps make them pretty important to the story. They've got their own issues, and the ways in which their "small, medium, and big baggage" affects the Core Four is really essential. After all, we're all just trying to do this life thing together, and other people effect that, okay? Not all these dudes are great — haaaave you met Ace? — but Hanna, Marnie, Shosh, and Jessa couldn't do this whole growing up thing without them. And yes, no matter how many times you scream "Get the MF'ing toothbrush out of your mouth, Ace!" at your TV screen, this is all necessary.

So how do the men of Girls rank from awfulness to he's so great "I could puke"? Here's the definitive ranking of the guys on Girls.

Ugh. Booth Jonathan, Marnie's suffering artist fling, was the absolute woooorst. I get that art is art, and it's completely subjective, but the hell was that "art piece" where he made Marnie sit in with all the TVs? Also, I can't forget the weird "three-way" he and Marnie had with the old creepy doll.

The f—king toothbrush. Ace is arguably the worst character on the show now. (Basic Marnie is a close second.) Ace has defied all known science laws as to what a terrible person actually means. He uses Jessa basically to get back with Mimi-Rose, and also he just generally sucks. BYE.

Kevin worked with Hannah at GQ in the advertorial department, and let's just say even the free snacks couldn't save this sinking ship. He didn't like Hannah because she came up with better ideas than him — yeah, I said it — and he blamed it on her looking like an ex he hated. Not. Buying. It.

He tried so hard to be carefree and fun like Jessa (his wife for a hot second), but ultimately, it just didn't work out for two-first-names Thomas John. He was the definition of awkward, and was just not able to keep up with Jessa.

Honestly, what is Desi's deal? Whatever it is, it's definitely not as good as a BOGO deal on pizzas, that's for sure. Sorry, I digress. He clearly doesn't really love Marnie (nor do I think she really loves him...they both think they love each other). He just got out of a relationship with Tangerine/Clementine and shortly after proposes to Marnie. He doesn't treat Marnie as an equal (see not consulting with her before spending their $2,000 advance on "the tightest German guitar pedals ever made in history.") I also think the second he finds fame, Marnie will be dropped quicker than he can say "I want to be in Mumford & Sons."

I liked Charlie. He tried so hard in Season 1 to make his relationship with Marnie work, but alas it wasn't in the cards. But when they got back together (in the Marnie-singing-Kanye era) and it didn't last, I didn't really care. He had made his fortune with an app he built inspired by Marnie and kind of had this IDGAF attitude that wasn't very cool of him.

In the episode that unfortunately reminded us that our parents are people, too, Tad came out to his wife, who revealed his sexual preference to Hannah. Before Tad came out as a middle-aged gay man, I thought he was decent, and I still do. I really liked his support for Hannah while she was at Iowa, it was admirable, and something I think all children would hope for from a parent when they're feeling down. The only reason he's not further on the list is because he's a little blah, but maybe that's because he's hiding a big part of who he is.

Laird, Laird, Laird. You magnificent creepazoid. Do I think it's weird that you only drink POM juice? Yes. Will I hold it against you, nah, but get some H2O in there, my man! I'm happy for Laird now that he and Adam's sister Caroline are expecting a baby who is going to be hella individual, that's for sure.

I think the thing that gave Fran such a solid spot on the list is that he called Hannah out for being so incredibly dramatic, even though Hannah wholeheartedly disagrees. By means of proving she's not dramatic, Hannah gets even more dramatic, and I'm left screaming "RUN, FRAN! Go back to Dunder Mifflin!"

Elijah isn't a great person, per se, but he is the perfect complement to Hannah. He's also got some killer one-liners that will brighten up any brunch.

Adam gets my "Most Improved" imaginary trophy for going from one of the most "icky" (industry term) people on the show to one of the more normal people. I don't know if it's the character, or Adam Driver's acting, but Adam's emotions are so genuine, I think that even if he doesn't end up with Hannah, he is important to the show.

Let's hear it for the boy! Number one goes to Ray, Old Man Ray, if you will, because Ray is figuring it out. He may not have it figured out, but he will figure it out. Ray has gone from super miserable, grumpy, pessimistic Ray to slightly less miserable, slightly less grumpy, semi-pessimistic Ray, and I think those changes are really evident. He has found something he is passionate about ("politics"), he's found someone he's passionate about (Marnie...), he's maturing, I think. Like I said, figuring it out.