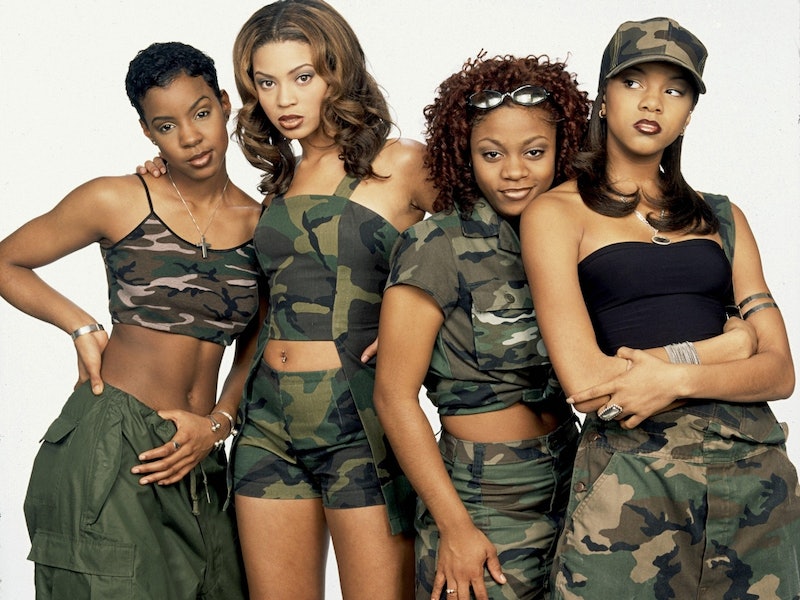 The old adage "write what you know" applies to music, too — and a lot of the time, that means including references to an era's current technology in pop songs. Hey, it makes sense — most of us spend more time messing around with our phones than we do falling in love at first sight, or partying all night, or whatever the hell else most songs are about. But what happens when a song about cutting-edge technology turns into a song about outdated technology?

Pop music history, of course, has always been speckled with references to communication techniques and technology that has gone on to become obsolete; for reference, please consult "Western Union" by the Five Americans, a hit 1967 about being dumped via telegram (which nowadays sounds as old-fashioned as being dumped via scrimshaw). But over the past few decades, as technology has progressed at a blindingly fast rate, songs about technology have a shorter and shorter shelf life. What makes you sound like a hip, youthful insider today makes you sound like a weird, out-of-touch old fogey the next — especially if you stayed fixated on pagers for, like, a really long time.

So bust out your Tamagotchi, steal your mom's PalmPilot, and join us for a trip through the lyrics of 11 pop songs about technology that basically no longer exists. Note: I didn't miss "Payphone" by Maroon 5; it doesn't count because he's purposely invoking outdated technology for nostalgic purposes. God, give me a little credit.

Listening to this song's anguished lyrics about being stuck on a train with no way to call someone, you have to wonder: if smartphones had existed in the '90s, would anyone ever have gotten lonely enough to invent emo?

8. Rage Against The Machine, "Freedom"

Rage Against the Machine's well-intentioned-college-freshman politics aren't the only thing about them that feels dated. This 1991 song's reference to the computing technology of the day ("All live, never on a floppy disk") makes it something of a head scratcher now, in an era where many people have never had to use a floppy disk, let alone had to get their political information from guys who climbed the rigging at the VMAs.

Rap trio C-Side had a few almost-huge hits between 2007 and 2009 — and all of them had something to do with the moment's youth trends (texting, cell phone videos, being a freak). But the social network was a particular inspiration for the group — in addition to the self-explanatory 2007 "MySpace Freak," the group's infinitely more PG-rated 2008 song "Boyfriend/Girlfriend" equated being put at the top of someone's MySpace Top 8 as the ultimate in romantic gestures. Which I guess it kind of was?

Ha ha, you totally thought Muse were too cool to write a song about having an AIM-based crush, right? Me, too. So we both learned something today!

This early track by the British mope-rockers was recorded in 1999, way before they would become famous for writing dour songs that had nothing to do with the cost of per-byte Internet access. But the song's fake Radiohead wailing is actually surprisingly catchy — even though the lyrics are probably about some girl singer Matthew Bellamy met in a Radiohead chat room.

Back in the day, mixtapes were such a standard part of life, you could incorporate them into a pretty elaborate metaphor which you then used to rag on a fellow emo band (as is done in this song), and no one would really question it. I guess today you would probably just subtweet about their haircuts or something and be done with it.

[We hope] the only Billboard Hot 100 song to ever have an emoticon in the title, this 2009 hit's wide-eyed, blow-by-blow description of both sexting and using social media ("Shawty sent a Twit pic saying come and get this/ LOL smiley face, LOL smiley face/ Go to my page and follow," "Babygirl sent a picture to my Blackberry") instantly made both sexting and using social media seem really, really uncool.

Hey, remember back when the only way you could listen to music was to play one of the 25 CDs you already owned, or call in a request to the one radio station in your town, which seemed to only ever play "Rollin'" by Limp Bizkit? I take back everything nostalgic I ever said. The past was horrible and I am glad that it is dead!

2. Common featuring Canibus, "Making A Name For Ourselves"

If you are too young to remember CD-ROMs, please note that we used them to learn facts and play Myst, not to go on the internet, no matter what Canibus says in this song ("put this in your CD-Rom/www dot cannibus dot com").

Was this 1999 song — which featured the impossibly timely hook "You make me wanna throw my pager out the window/tell MCI to cut the phone polls" — created to document the first heady moments of our "constant contact" culture, a brave new world where you could annoy the hell out of someone without even being anywhere near them? Or was it written by someone who thought that pagers would remain popular long after the earth was swallowed by the sun? If you see Beyonce, make sure to ask her for me.

Other outdated technology depicted in the video: every outfit and former Destiny's Child members LaTavia Roberson and LeToya Luckett (sorry, had to).

More like this
Now That 'Renaissance' Is Here, Let’s Revisit Beyoncé’s First Solo Album From 2003
By Grace Wehniainen
Beyoncé Sent Flowers To “Masterpiece Genius” Madonna After The “BREAK MY SOUL” Remix
By Grace Wehniainen
Beyoncé Is The First Woman To Have A No. 1 Album Since Adele Did Almost A Year Ago
By Radhika Menon
Beyoncé & Madonna’s “Break My Soul” Remix Honors A Group Of Black Icons
By Stephanie Topacio Long
Get Even More From Bustle — Sign Up For The Newsletter