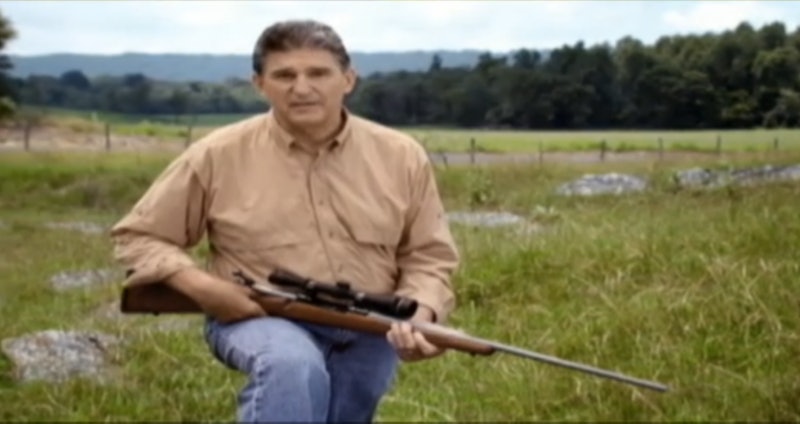 One could say that Senator Joe Manchin (D-WV) and the NRA are, well, at odds. After co-authoring a bill to expand gun background checks, Democratic Senator Joe Manchin took a beating from the National Rifle Association—a group of which he's been a "lifetime member" for dissenting. On Thursday morning, in response to the NRA, Manchin released his own ad in retaliation called "Common Sense."

In the 30 second video, the West Virginia Senator carries a gun and says, "I don't walk in lock step with the NRA's Washington leadership, this administration or any special interest group." Manchin also urges gun owners to "Call the NRA and tell them to support criminal background checks." Check out the video here.

Although the bill Manchin co-authored with Republican Senator Pat Toomey failed, he still thinks there's a chance the legislation will pass the Senate this year if revisited. A reminder: Manchin isn't up for reelction until 2018.

More like this
Prince William Condemns “Unacceptable” Comments Made To A Black Guest At Buckingham Palace
By Shahed Ezaydi
Haim Reacts To Stevie Nicks Wanting To Sing Their Song To Christine McVie
By Radhika Menon
Bustle Daily Newsletter: December 6, 2022
By Hayley Schueneman
Kim Cattrall Had A 'Sex And The City' Reunion With Creator Darren Star
By Grace Wehniainen
Get Even More From Bustle — Sign Up For The Newsletter