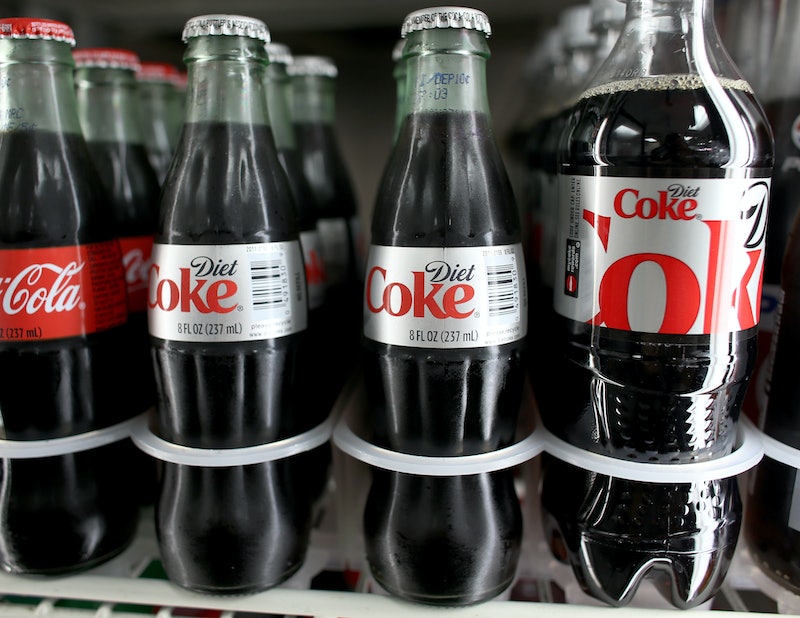 According to researchers at the University of Texas Health Science Center in San Antonio, there is a strong correlation between diet soda consumption and weight gain among people over the age of 65. Over the course of several years, researchers monitored the participants' diet soda consumption in addition to keeping track of their weight. As the study wore on, it became readily apparent that those who drank more diet soda also gained more weight. In fact, those who didn't drink diet soda, on average, increased their waistline by 0.8 inches; those who drank diet soda occasionally, on the other hand, saw their waistlines expand by 1.83 inches; and for regular diet soda drinkers, it was more than three inches.

Of course, it's worth pointing out that there's no evidence here that diet soda is directly responsible for the weight gain. It could be that people who drink diet soda are more likely to eat fattening food or less likely to exercise. Or it could be that "diet soda" is a misnomer in the first place.

Unfortunately for lovers of bubbly beverages, though, this isn't the only study to have shown the negative effects of diet soda on the body. Here are a few other things to consider before cracking open a bottle of your favorite combination of carbonation and fake sugar:

Though it's probably not, as one study argued, as bad for your teeth as meth, the acidity in Diet Coke (among other carbonated beverages) still might result in some extra dentist visits if drunk in excess.

2. It Makes You Crave Sugar

It turns out artificial sweeteners make you crave sugar, but don't actually satisfy that craving. Not only is that annoying, but worse, it will increase the likelihood of you eating or drinking something sugary later on in an effort to sate that craving. No good.

3. It's Bad For Your Stomach

Artificial sweeteners — like the ones found in diet soda — can affect the bacteria cultures in your gut. You know, the ones used to break down your food properly and provide your body with nutrients? Yeah, maybe don't want to mess with those.

Though Diet Coke is supposed to help you cut back on calories, studies have found that for people who are overweight don't wind up consuming fewer calories when they switch to diet soda.

5. But On The Bright Side, It's Maybe Not As Bad As You Think

There are lots and lots of studies on how terrible diet soda is for your body, but some studies suggest those might be overestimating the effects. At the very least, the research is contradictory. So, the good news is that we don't know any of this stuff for sure... yet.