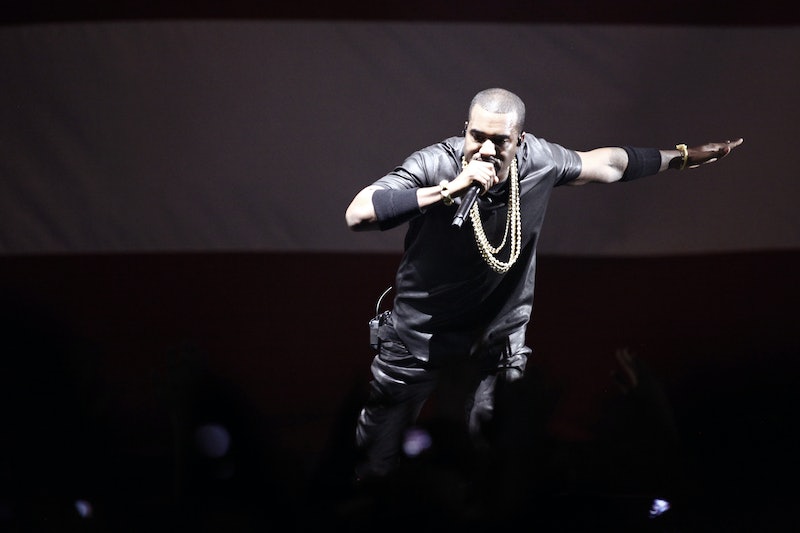 It seems that people really, really don't want Kanye West at Glastonbury Festival. When some people don't like an artist, they might just refuse to buy their music. Some might go as far as to change the radio station when that artist comes on. These (almost) 80,000 people signed a petition to remove Kanye from Glastonbury's lineup and replace him with someone a little more appropriate — like a rock band or, probably, anyone who isn't such a "egotistical, maniacal, disgrace." That might seem more than a little harsh until you remember that it hasn't even been a month since Kanye was ranting against Beck before later admitting he hadn't even listened to his album yet.

We tend to forget what a controversial figure Kanye is because we're so used to him that many of us are desensitized to his outrageous behavior. However, the fans who are signing the petition — almost 83,000 out of the designated goal of 150,000 so far — are not about to make like Elsa and let it go. According to the opening page of the petition:

Kanye West is an insult to music fans all over the world. We spend hundreds of pounds to attend glasto, and by doing so, expect a certain level of entertainment.

Kanye has been very outspoken on his views on music....he should listen to his own advice and pass his headline slot on to someone deserving!

As for the reasons people have for signing, well, they tend to range from "Kanye has no talent" to "Kanye is an ego maniac" to, memorably, "HE WAS MEAN TO TAYLOR [Swift]." Quite honestly, there are only three ways that this situation could end, and I'm not sure that any of them are really what the petition is hoping to accomplish.

Most Likely: Kanye Hears About The Petition... And Is Angry

Speaking as a fan of Kanye, even I am over his tireless rants about the music industry and "true artistry" and Beyoncé's music. The most likely scenario to come out of this is that he finds out about the petition from one of the numerous news outlets to report on it, and he treats us to another rant about how he's a visionary and a genius and we just don't understand music, you guys. Have we ever even heard music? Then how can we not like his? (I'm rolling my eyes already, in case you couldn't tell.) I would consider it a victory if we weren't also treated to 82,887 tweets in response to every single signature, but I won't hold my breath.

Moderately Likely: Kanye Hears About The Petition... And Is Amused

Kanye is a creative genius who is used to having a lot of controversy swirling about him. Plus, he has a wife and daughter to think about now. Instead of going on a furious rant about the petition, maybe he'll print out a copy of it and bring it to Glastonbury with him to shoot out at the audience as confetti during his set. Maybe he'll freestyle rap about it — or even incorporate it into a verse in his next song. Maybe he'll just tweet out a couple of LOL's, maybe drop a SWISH, and then start encouraging his followers to sign the petition so that it can get all 150,000 signatures. I can see him refusing to take this seriously.

Least Likely: Glastonbury Hears Of The Petition And Drops Kanye

"Sorry, Kanye, I'mma let you finish, but you were mean to Taylor in 2009. IN 2009!" Okay, so I just plain don't see this happening. Unless Kanye removes himself from Glastonbury Festival, they probably won't omit him now no matter how many signatures the petition gets. However, I can't entirely say I don't understand why such a petition is circulating to begin with. Kanye is more synonymous with controversy than he is with good music, and that shows no sign of stopping any time soon.

More like this
Kim Kardashian Father’s Day Tribute To Kanye West Called Him “The Best Dad”
By Stephanie Topacio Long
Olivia Rodrigo’s Song Dedication To 5 SCOTUS Justices Sent A Strong Message
By Grace Wehniainen
Will Beyoncé Be At The BET Awards To Perform “Break My Soul” Or Attend The Show?
By Jake Viswanath
Lily Allen Was “Quite Emosh” After Performing Sober At Glastonbury Festival
By Stephanie Topacio Long
Get Even More From Bustle — Sign Up For The Newsletter