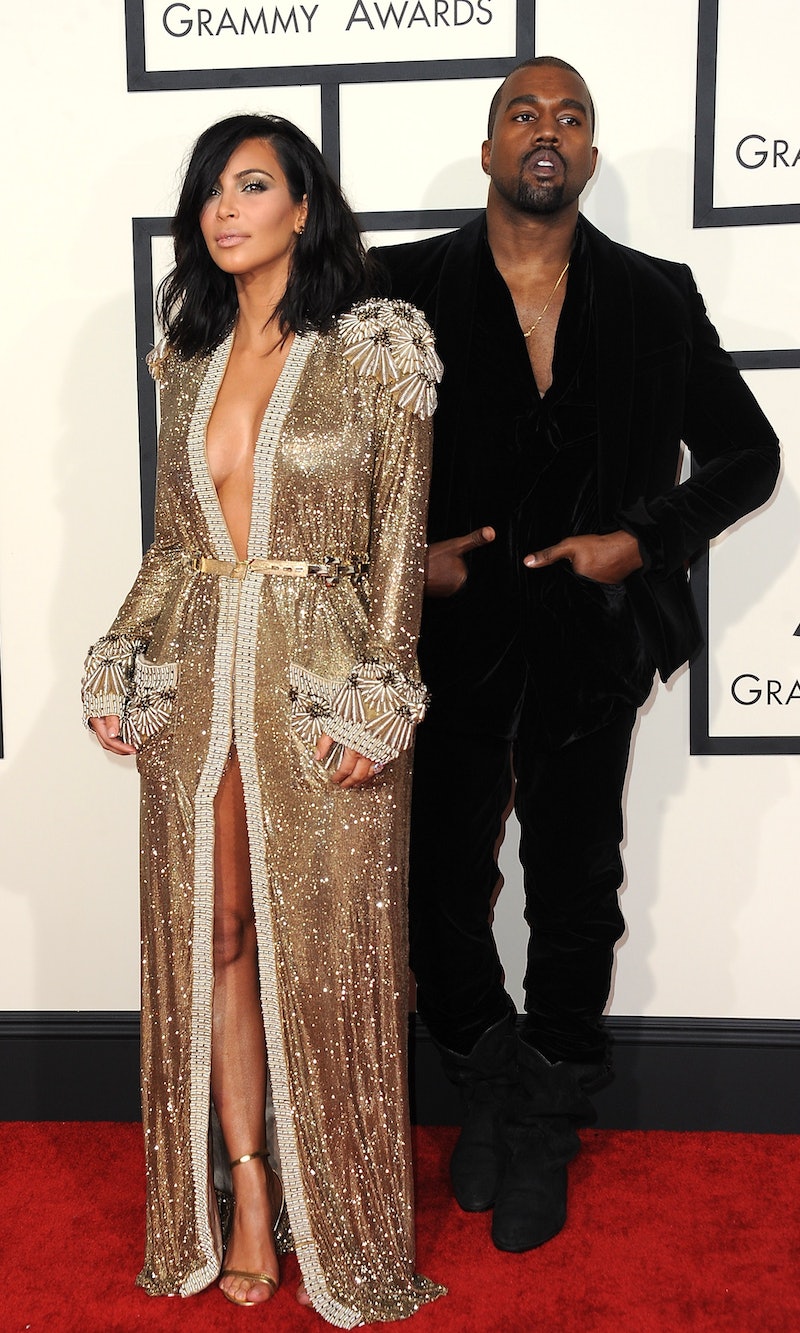 When Kim Kardashian and Kanye West walked the red carpet at the 2015 Grammy Awards, I had some pretty high expectations, and not all of them were met. Sure, the power couple looked great and were totally in love, as usual, but their interviews were brief, and I just wanted more. Luckily, Kim and Kanye stopped by E!'s Grammy After Party, and it turns out Kanye had a lot to say — he was just saving it for after the awards. Kanye essentially went on a rant to E!'s hosts, starting by insulting Album Of the Year winner Beck, and then going into topics that include his relationship with Kim, the E! network, and more.

The standout moment was definitely Kanye's comments on Beck. After Kanye was shown footage from earlier in the night — when the rapper pretended to run on stage to take the microphone from Beck after the artist won Album of the Year for Morning Phase, mirroring his interruption of Taylor Swift at the 2009 VMAs — Kanye revealed that though his actions were playful, he had serious thoughts on Beck’s win over Beyoncé. "All I know is if the Grammys want real artists to keep coming back, they need to stop playing with us," Kanye said. "We ain't going to play with them no more. Flawless Beyoncé video. And Beck needs to respect artistry and he should have given his award to Beyoncé." Watch some of Kanye's comments below.

While I respect how seriously Kanye takes music, discrediting Beck as an artist seems to go against his own point (not to mention the fact that his words were unnecessarily mean). Kanye had even more to say on the matter.

At this point, we're tired of it, because what happens is, when you keep on diminishing art, and not respecting the craft and keep smacking people in the face after they deliver monumental feats of music, you're disrespectful to inspiration, and we as musicians have to inspire people who go to work everyday and they listen to that Beyoncé album and they feel like it takes them to another place.

It seems Kanye didn't consider that there are likely people out there who feel the same way about Beck's album. And that's not all. Kanye implied that he actually considered doing more on stage with Beck, but stopped himself.

And by the way, I got my wife, I got my daughter, I got my clothing line, so I'm not gonna do nothing to put my daughter at risk, but I am here to fight for creativity...That's the reason I didn't say anything tonight...But y'all know what it meant when 'Ye walked on that stage.

Apparently, Beck has North West to thank for Kanye turning his sudden appearance on the stage into a joke, rather than another unforgettable interruption. For their part, both Kim and Khloe Kardashian (the latter of whom was serving as a host for the After Party) told Kanye they wished he would have stayed on the stage. So, clearly, no Beck fans in the house. In fact, Kim later posted the photo below on Instagram, apparently expressing her shock and disappointment towards Beck's win.

But Beck wasn't the only person Kanye discussed during his brief but loaded appearance. After saying some sweet things about his wife (apparently, he longer needs alcohol because he’s “drunk in love” with Kim), he took a stab at E! — the very network he was on, which also happens to employ Kim and her entire family. "E! needs y'all. The Kardashians own a PERCENTAGE OF E!," he said.

Ready for more? Kanye then showed the camera that he removed the E! logo from his microphone, then insisted that all three After Party hosts and Kim remove theirs, pulling the logo off the microphones himself. After a very intense few minutes, Kim and Kanye left to catch their flight to New York, but not before Kanye made everyone promise not to put the E! logos back on after he left. A few minutes later, Khloe shared a text she received from the couple, asking if they kept the logos off like he asked (they didn't).

Though I think Kanye owes Beck an apology, he might not owe E! one. After all, as Khloe and her fellow hosts agreed, Kanye’s remarks were the craziest things to ever happen on E!'s After Party. Maybe this will make more people tune in next time.

More like this
Kim Kardashian Pays Homage To Kanye West’s Fave Film In New Swimwear Pics
By Bustle Editors and Maxine Harrison
Kanye West Has The Most Kanye Reaction To Kim Kardashian & Pete Davidson's Split
By Jake Viswanath
Are John Legend & Kanye West Still Friends? The Singer’s Latest Update Is Candid
By Brad Witter
Olivia Rodrigo's Rumored Boyfriend Has Ties To Drake & Madison Beer
By Jordyn Tilchen and Grace Wehniainen
Get Even More From Bustle — Sign Up For The Newsletter