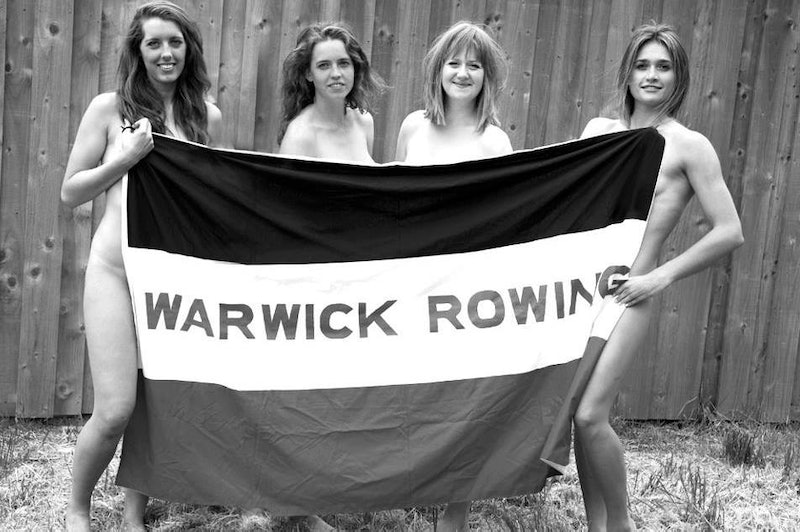 The Warwick University women's rowing team published a naked calendar to raise funds for charity, and all those bare bodies have Libby Page from The Guardian asking if this practice once reserved for Playmates and Hooters waitresses is a form of empowerment or objectification. Turns out, it might just be a little bit of both.

Last year, the Warwick University women's rowing team posed for their first naked calendar much to the dismay of a number of feminists. The team raised £600 which they donated to Macmillan Cancer Support, a British charity. A few days ago, their 2014 calendar came out.

The Huffington Post's Layla Haidrani was one of the fiercest opponent to last year's calendar. "As opposed to being liberated by posing semi-naked, they are in fact just helping women to be perpetually viewed as sex objects, something to be 'bought', 'sold' and then tossed away once the Christmas period is over," she wrote.

The girls in the calendar disagreed with their critics. "In our opinion, the feminists who criticized our calendar for hampering the feminist cause are contradicting their own argument," Hettie Reed, Frankie Salzano, and Sophie Bell, three of the rowers in the calendar, told The Daily Mail . "As the men of our club have produced a successful [naked] calendar for the past four years, we are more than entitled to do the same thing," they said.

Mirren Gida, whom Page lets argue one side of the debate, wonders about those purchasing the calendar. "Of course many will be buying them to support the team and the charity. Nevertheless, there will be some buying the calendar for less than charitable reasons," she writes. Yes, some will look at these women and think these naked bodies are nice to look at — because they are. People can also look at a woman out and about in a short dress and fantasize. If we get into the argument that we should be keeping our bodies hidden to prevent the male gaze, aren't we just falling into a misogynistic trap?

Haidrani and others accusing the Warwick rowers of perpetuating sexual objectification ignore the fact that the girls made a free choice to pose in the calendar. The photos themselves are actually pretty tasteful, featuring black and white scenes of the women doing rowing-related things, like carrying equipment out of a boat shed and standing on a pier wearing life jackets. The women themselves have a variety of healthy, gorgeous bodies — something that could go a long way toward building up the body positivity your average clothed model threatens. Why don't we spend our time complaining about her, instead?

If anyone wants to complain that in our society, sex sells (which it totally does), they should take up their complaints with our narrow minded mainstream media that pushes sexualized images of a restrictive beauty ideal. Or, alternately, check in with the patriarchal structure that says it's OK to look at women as sexual objects. The naked female body is not anti-feminist: it's natural, and it's beautiful. And beauty always sells.

More like this
Here's How To Practice Self-Love In Small Ways Every Day
By Mackenzie Sylvester
Ask Gen Z: Kate Glavan & The "Ugly Hag Stroll"
By Alexis Morillo
If Your Refrigerator Is A Mess, These 25 Organizing Products Can Help
By Courtney Young
Here's Your Daily Horoscope For May 23, 2022
By Mecca Woods
Get Even More From Bustle — Sign Up For The Newsletter