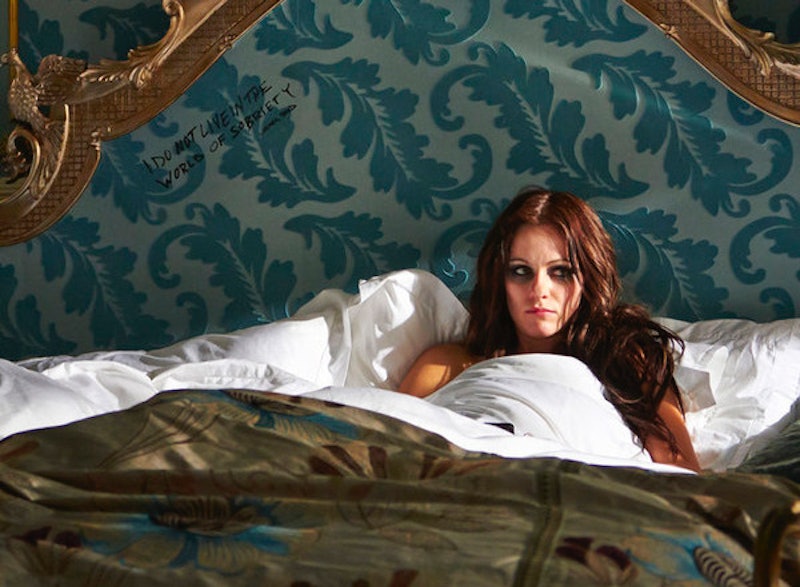 While I'm sure the writers of E!'s first ever scripted drama probably want us to be all about 'shipping Prince Liam and his girl-next-door, American girl Ophelia, it's Liam's sister that has truly stolen the spotlight on The Royals . Princess Eleanor and her bodyguard Jasper have entered into a rather tawdry agreement at the start of Sunday's episode, and while it absolutely does not sit right with me, I cannot look away for the life of me. (Believe me, I feel terrible about it.) What's really strange about this plot, however, isn't just the fact that it started with a date rape in the pilot episode, but that there actually seems to be a rapport between the duo in Episode 2. Could The Royals possibly be setting up Eleanor & Jasper as a 'ship?

I'd like to say it ain't so, but I'm pretty sure that would be a giant lie. After the events of the Queen's garden party, there's no denying that this date raper is being groomed as a viable love interest. I'm sorry, but in what world is that an OK thing?

To recap: In the pilot, Eleanor wakes up in bed with Jasper, all foggy-headed and hungover. She assumes she's been up to her usual antics, but Jasper informs her that he drugged her, filmed them having sex, and that he plans on using it to blackmail her into doing whatever he wants. In Episode 2, it becomes clear that "whatever he wants" also includes subsequent sex and sleepovers, ordering her to get him breakfast (uh, make your own damn sandwich, you ass), and generally providing hours of mental torture. The problem is that this is all shot with elements of sexy fun and that even their dialog is clearly verbal foreplay. These two clearly like each other. A lot.

But is The Royals really trying to tackle the complex nature of a trusting relationship marred by date rape and the strange aftermath that comes with it? Or is there something more plot-based and less-issue ridden at work here?

My hope — and my years-honed TV sleuthing skills — tells me there's something more to this relationship: Namely that Jasper didn't really date rape Eleanor. My guess? Jasper liked Eleanor. Jasper was mistreated and spoken to like a dog by Eleanor. Jasper was about to be fired, er, sacked because of Eleanor. Jasper saw an opportunity to lie to Eleanor about having a video of her sexploration the night before and thus keep hanging around her. He took it and now he's in this weird spot and his feelings are becoming evident. Why else would he knock out a famous olympian (and world class jerk) for calling Eleanor a "desperate slut" after the Queen's garden party? Jasper's got it bad and he can convince Eleanor he's got her trapped, but ain't nobody going to degrade her by calling her a slut. Apparently, only Jasper can do that.

So there's still a problem. This still leaves this storyline in troubling no man's land: Even if Jasper didn't actually do the truly despicable thing (date rape), he did do a pretty despicable thing (blackmail, generally lying) and he is actively extorting sex from Eleanor. How the hell is this going to end in a 'ship that we can actually feel comfortable 'shipping? I have no freaking clue, but man I hope this show has an answer.

That is the real reason I can't let this Royals story go. I'm wracked with guilt but I need to know the answer more than I need food or water: What possible twist could make this all OK? I don't have faith, but I do have a hunger for storylines that barely make sense but still make my brain explode in a display of confetti shaped into tiny little OMGs. And The Royals had better deliver. And that's really why we're all tuning into this royal s—tshow, isn't it?