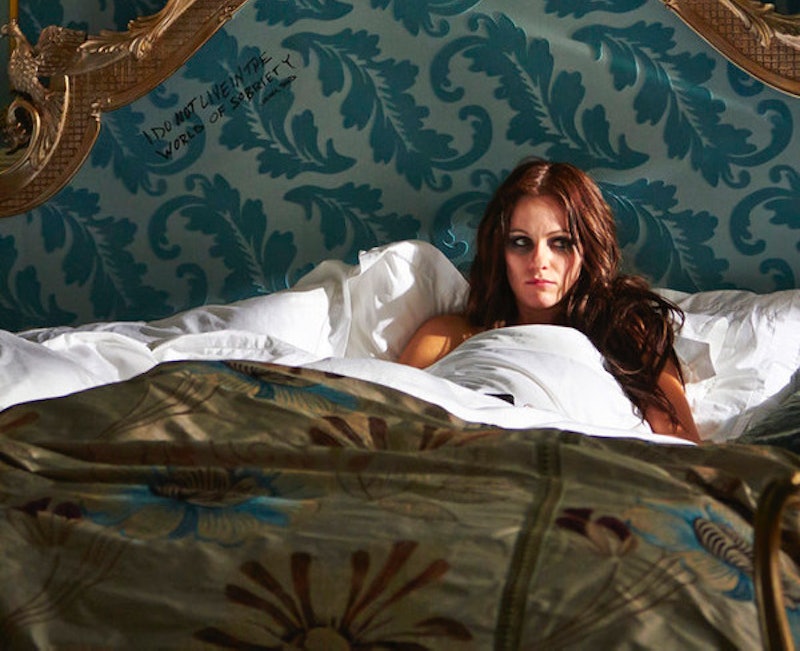 While watching E!'s Network's first foray into scripted television — the new drama series The Royals — I was surprisingly entertained by a large portion of it. It's overly dramatic but featured some fun, scene-chewing performances from Elizabeth Hurley who plays Queen Helena, and relative newcomer Alexandra Park who plays Hurley's daughter Princess Eleanor. It all seemed like soapy good fun, until I got to the end and saw Eleanor's date rape plotline. Frankly, seeing this kind of story infiltrate soapy drama yet again is kind of insulting.

In case you missed the first episode, the series follows a fictional British royal family with Hurley's Queen Helena at the top and Eleanor and Prince Liam as her two children. Liam is a relatively good kid, aside from sleeping around a bit, but Eleanor is a party animal who does drugs and gets drunk every night of the week. In the premiere she has a new bodyguard named Jasper whom Eleanor forces to take her to a new club. The next morning, they wake up together and she tells him he's probably going to get fired later, until he reveals that he drugged her, had sex with her and then filmed the whole thing on his camera, so he can keep his job. Now I don't know what happens next or what the series plans to do with this plot, but the way the series has presented it so far feels like it was tacked on to give the pilot episode a little extra entertainment and shock value. Seeing a storyline as serious as that is being treated so nonchalantly is upsetting on so many levels.

Based on promos for The Royals , which was renewed for a second season two months before Sunday night's premiere, it doesn't look like the show is going to really explore the idea of Eleanor's date rape. In fact, it looks like she may fool around again with Jasper in the promo above. It's possible that Eleanor won't even consider what happened to be date rape, she didn't seem to concerned seeing Jasper in bed next to her the next morning. Are they trying to sweep the story line under the rug or just make Eleanor and Jasper out to be truly unrelatable people? Either way the whole plotline is concerning.

If the series wanted to create this storyline to say that even royals or people who are watched and protected all the time can get hurt, then I could understand that, because unfortunately, violence against women can happen anytime, anywhere — that's what makes it such an important and serious issue to discuss openly. It could be really interesting to see someone like Eleanor who is judged in the media and doesn't seem to really have much character development just yet really try and tackle and speak out about something this serious. But considering it seems to be back to business as usual next week, I'm wary.

I just can't understand what the point is of bringing up such a serious topic so lightly. Other shows have attempted the date rape storyline before, surprisingly one of the best developed plots involving the issue came from the ABC Family series Switched At Birth , though the situation in that series was completely different that on The Royals. I genuinely hope that my assumption is wrong, and that the issue will be brought back up and explored in a way that can create discussion on the matter, and show audiences that this serious issue deserves to be handled appropriately.

But at the moment, all I see is a television show looking to shock viewers and be a water-cooler topic the next morning. And if that's all this storyline turns out to be, then why use date rape? Why not just do something ridiculously over-the-top that isn't also making violence against women something to entertain a hungry audience? The series has been touted as being "framed by Hamlet, " and that play is full of crazy that doesn't have to cross the line into the tired trope of men using sex as a weapon against women.

Still, it's just a pilot episode, so there's still room to grow. Please prove me wrong The Royals writers, and make the rest of your stories worthy of being told.

More like this
UK Viewers Will Have To Wait To Watch The Handmaid’s Tale S5
By Maxine Harrison
Why Princess Anne Will Remain Princess Royal For Years To Come
By Sophie McEvoy
8 Photos Of Prince George & Princess Charlotte At Queen Elizabeth II's Funeral
By Jake Viswanath
Here's What Jeffrey Dahmer's Dad Has Said About His Other Son, David
By Grace Wehniainen
Get Even More From Bustle — Sign Up For The Newsletter