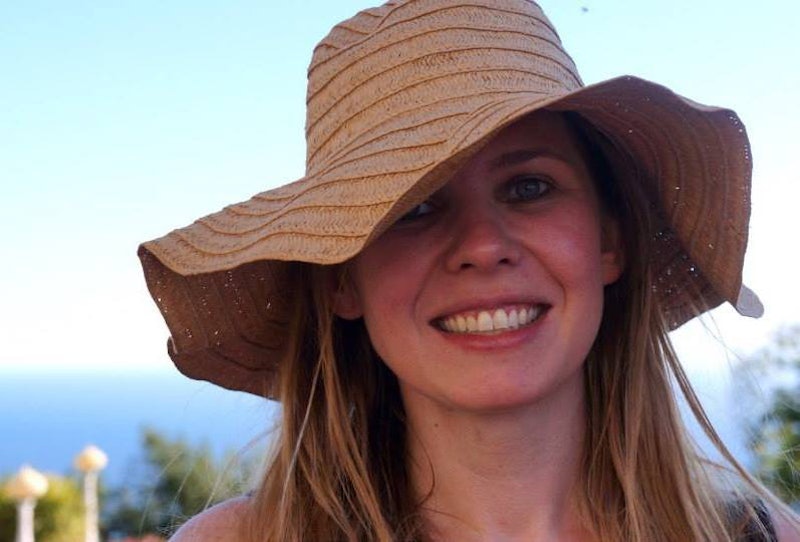 We all go on blind dates, but not all of us go on Blind Date, the TV show. You know, the one with the thought bubbles above daters’ heads. When I was in my twenties, I went on the show; I thought that I’d first be a guest on it, then apply to be a writer on it. Going on a (blind) date is nerve-racking enough — let alone if 4-5 people come along to film it and also have you bring a suitcase with some extra clothes "just in case" (a jacket, a dressy outfit for dinner, and a swimsuit). I purposely “forgot” the latter. Dating on TV, fine, but appearing in a bathing suit, no way.

The process of getting on the show was a bit complex. First, you’d go into a nondescript building on Sunset Blvd. and get your picture taken. On my day, they were looking for women and we’d wait around a conference table as someone brought our Polaroids into casting. Then, they’d come out to announce who made it to the next round. Over half the people were “disqualified.” The next step was filling out a questionnaire that reminded me of the SATs — 101 questions about dating (what you like to do, what you don’t), what advice your parents would give you when you went out on dates, what kind of person you’re looking for, etc. (Later, I came to find out that a lot of these tidbits helped spawn the thought bubbles.)

I diligently answered the questions. In the part about what you don’t like to do on dates, I put “dancing,” then specified it to hip-hop dancing (though ballroom was fine). In advice my mom gave me, I scribbled, “Just say no.” In the type of guy I wanted, I believe I put something such as, “Someone I can talk to about anything, anywhere.” There was also a part to list "profession," with a disclaimer like, "If you're an actor, make something up." I wasn't an actor and wrote "Writer." I saw the girl next to me write "Milkmaid." After that, the questionnaires were collected and we were put on camera, answering even more questions about ourselves, our hobbies, and so forth.

My date was not from L.A. and looked like he stepped off the set of Happy Days, his hair slicked back and wearing clothes from that era, which included a colorful, big-collared shirt and shiny shoes. It was the end of Blind Date’s season, so our date outing was considered “low-budget,” I heard a crew person say.

First, we went to make paper airplanes. All I remember is styrofoam, box cutters and lots of blood — my “date” cut his finger so badly that he couldn’t speak throughout the activity. Instead, the crew scrambled to find Band-Aids. (None of this made it on-air.)

In the crew van — yes, van — Mr. 1950s practiced his yodeling and talked faster than the Road Runner if he spoke as fast as he ran. I couldn’t get a question in if I tried and I felt that the camera crew was trying to keep from laughing. (After all, everything was being recorded.)

My heart raced when we reached the next date destination: a dance studio. And not just any dance studio… a hip-hop one where Britney Spears had allegedly studied. Good thing I’d worn my favorite red pants from the Gap to draw even more attention to myself. I was like a little kid on their first day of kindergarten — terrified to enter, let alone make a move. (I’m nearly hyperventilating writing and remembering this.) But, the super cool dance instructor and crew were waiting, as was my dance partner. Unlike me, he was thrilled at the chance to dance on TV, the same way an American Idol hopeful would be to sing. And, I found out he had his own oldies band and loved singing and dancing. But, no pressure.

That dance instructor was the most patient man on Earth, trying to teach me simple dance moves that I could not master. I wanted to cry, my face as red as my pants. I heard crew members sighing and saying, “we’re almost out of time,” as they asked the instructor to show me the same move over and over again.

Finally, we had to move on to the dinner portion of the evening (phew!). That could not be any worse than the dancing, I thought, feeling relieved. We arrived at a Mexican restaurant and were told to quickly change into our nice clothes in the bathroom. (Do you know how awkward that was, diners and crew people alike waiting for you?) While practicing being Superwoman, a producer spoke to me under the door, saying to think of three racy questions. I could barely get my dress on let alone think of things to ask a guy I didn’t even care to know more about.

The thing I remember most is the magnitude of margaritas Mr. 1950s drank. Of two pitchers, he had about one-and-a-half himself. I think one of my “racy” questions was, “Where’s the strangest place you’ve had sex?”(I don’t remember what he said.) And I don't recall the segue to my saying, "You're asking me to have sex with you?!" The show chose to use that amazing sound bite and clip in TV promos to advertise the episode. My poor grandma in Chicago, I thought. Every time the TV came on, no matter where I was, I’d scramble to shut it off.

I couldn’t wait for dinner to end, but the producers said we could go to another venue if we wanted to. (I prayed it would not be a hot tub, which ended up happening on so many of the dates.) Luckily, someone chose the bar next door, though I would have been happy just to go home. I sipped water while Mr. chugged a few beers.

My date whisper-slurred to me, saying how we soon would have to answer, on camera, whether we’d see each other again. “There’s no need for us to embarrass each other on national TV,” he said, “so why don’t we say yes, we will?”

There was no way I wanted to see him again, but he had a point and I just wanted the night to be over.

When the producer asked me, “Would you go on another date with him?” I paused. I wanted to say no. After all, they’d put Mr. 1950s in the other room, so my answer would be private (at least until it was televised). Instead, a “Maybe” came out. The crew said it had to be yes or no, so I waffled between them, saying, “Maybe… I don’t think so… yes… no… I don’t know.” This provided yet another great promo clip for “Blind Date” commercials, and I believe the thought bubble above my head said something like, "Natalia's mom: 'Just say no, Natalia.'" I peeked at Mr. 1950s in the other room, remembering how his eyes had pleaded with me to say, “Yes.” “Yes,” I told the producers, “I guess.”

Weeks and weeks later, my male roommate and I watched the show together. I didn’t want to announce it to friends until I saw it for myself. Each episode tends to make one of the daters appear more crazy than the other one, and Mr. 1950s definitely won… except when it came to dancing. Three different times while recapping the episode, the show host, Roger Lodge, said something along the lines of, “I still don’t know what Natalia was doing.” Of course, Mr. 1950s was an excellent dancer both in person and on television. Then, it was time for the end of the show, where we say if we’ll date the other person again. I said, “Yes” (they cut off my “I guess”) and Mr. 1950s said something like, “No. But I’d go out with her in a friendly kind of way.” I couldn’t believe it. To top it all off, it looked as though he came home with me, as the episode ended with him carrying his suitcase into my apartment and shutting the door behind him. Again, my poor grandma. (In reality, he needed to use the phone and since I had a guy roommate at the time, I felt okay letting my yodeling date in.)

Everyone I knew had seen the show — my then-boss even put it on during a weekly staff meeting in case anyone had missed it! — and happily quoted my stellar lines back to me at every opportunity. It also replayed for several, neverending months in a row, friends contacting me from all over the country, “Guess what was on last night?!"

In case it’s not clear, reality TV is not real. However, being on “Blind Date” was a fun, interesting, albeit educational, experience, though I haven’t gone on a date full of crew people since (and have also not danced since). It did teach me to trust my instincts about dates — and to not go out with someone again if I’m not feeling it, as well as not to falsely state I will, especially not to a camera crew. I wanted to spare Mr. 1950’s feelings by saying “Yes," but mine suffered in the process, listening to a stranger instead of myself. Also, be careful what you say and do on TV or on the Internet, because it never goes away (like my memorable uncoordinated-in-the-red-pants dance moves).