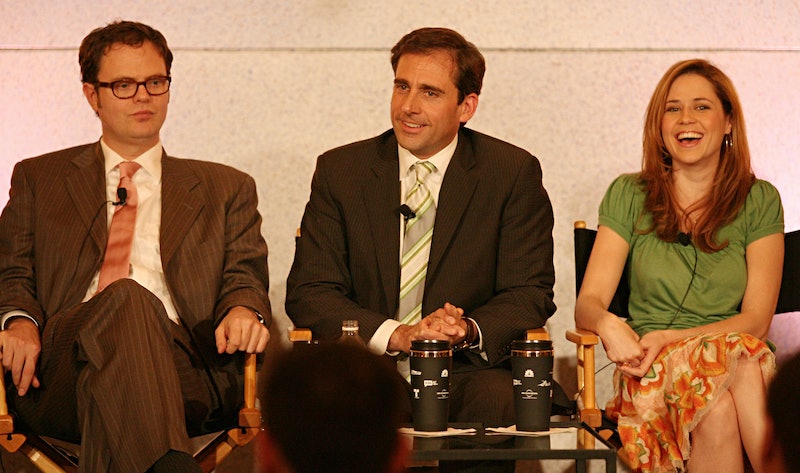 Can you believe it's been ten years since The Office premiered on NBC? The long-running comedy is without a doubt one of the most successful remakes of a British series — but what about all those knock-offs of NBC's The Office that networks tried to sell us after the fact? There have not been too many shows that out-right tried to copy The Office's format and failed. That can probably be attributed to the fact that the show was not originally a hit, the first season was very short, and once it was a hit the humor was too specific to copy.

Modern Family and Parks and Recreation worked in the United States. Both found their own way to use the mockumentary style that's different than The Office, In Australia, Summer Heights High was an impressive effort by Chris Lilley and gained some popularity when it aired on HBO. However, the spinoffs Jaime: Private School Girl and Jonah from Tonga did not work when they failed to capture the comedic game of the original series. Comedy looks effortless but it is not easy!

However, whether it was the "humdrum workplace sitcom," "mockumentary" or "if we copy the British, surely this will work" aspect of The Office, many shows did try to ride its mustard-colored sleeves to glory. Here are some comedies that miserably failed, may they rest in peace.

I remember really wanting this show to work, but watching this trailer I no longer see why. It seems to be poking more fun than representing, in my opinion.

If you are a fan of Community, you may already know that Joel McHale starred in an American remake of The I.T. Crowd. Though I wouldn't say anything was lost in translation, the humor didn't land and the show never aired. Some things are better left untouched.

This sitcom was canceled quickly and died a painless death. It was based on a British sitcom called Teachers as well. Shows about teachers never have really worked in the States, have they? Even Good Morning Miss Bliss soon became Saved By The Bell.

My Life As Liz

This show seems more mumblecore than The Office, right? Maybe it was streets ahead of its time, but the MTV teen mockumentary series only aired for two seasons.

This is a bit of a different issue. Quarterlife was a vlog-series on Myspace that NBC bought and aired. Presumably, the mockumentary style of The Office lead NBC to believe that Quarterlife would work on the network. The problem? The show's audience had already watched the series on Myspace. Why would they tune in again to see it on a slightly larger screen?

This was a mockumentary webseries that can be seen on Hulu but didn't take off quite like others of its kind.

To be fair, I actually really enjoyed this show. Lovespring International was on Lifetime and it was about a Californian matchmaking service and their employees. A lot of the workplace sitcom was improvised, and the cast included Jane Lynch, Wendy McLendon-Clovey, Jennifer Elise Cox (Jan from The Brady Bunch Movie), and Sean Hayes. Why didn't it work? Who turns on Lifetime to watch a sitcom?

It could be argued that this show was more copying the Modern Family format than anything else, considering that it was a mockumentary with a family-focus. However, the show aired on NBC Thursdays in a clear attempt to capture some Office mania. There was no reason for the confessionals — it just drew more attention to the show's weird balance of real life and fiction.

This one is sad. Christopher Guest's films popularized the mockumentary format. The Office wouldn't exist without This Is Spinal Tap,Waiting for Guffman, and Best In Show. However, at this point in television we were over it, and HBO canceled the series after one season.

While this series boasted an impressive comedy cast — Zach Galifianakis, Matt Walsh, Andrea Savage and A.D. Miles — the fake news series that improvised with real people was canceled after nine episodes on Comedy Central and even Galifianakis admitted that he didn't love "messing with people" in an interview with fellow comedian Michael Showalter.

I would argue that this TBS series tried to copy the Jim and Pam relationship in a sense. It's not the most obvious knock-off, but it did include a forbidden romance in an office setting. Suffice to say, the sitcom was recently canceled.