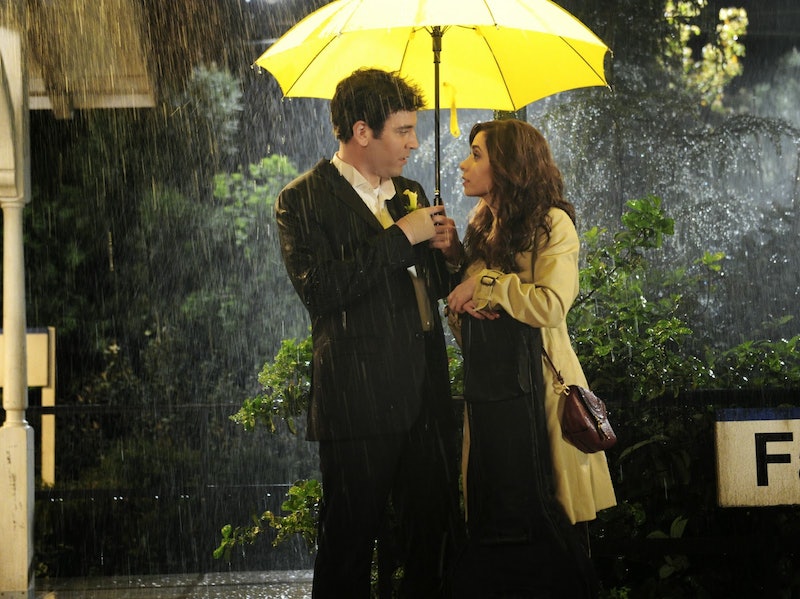 No matter how smooth you are, I don't think anyone is "great" at knowing how to ask out a stranger. For example, there's me. Last week, I'm pretty sure I met my soulmate. I was walking my bad self into the elevator of my building and there he was, basically just waiting in there for me like the universe had gift-wrapped him and stuck him in the elevator shaft for the sole purpose of us running into each other. He was adorkable. I was adorkable. We looked at each other a few times and both opened our mouths like we were going to say something, and the sexual tension was so real that I could basically hear the cheesy Nicholas Sparks soundtrack welling up in the background. And then...the door to his floor opened. He lingered for a second. I awkwardly stared at him for a second. And then he stepped out, and the sixth floor of the building swallowed him up, never to be seen again.

You know how people talk about the "butterfly effect," how any insignificant choice we make in our lives could actually be a huge catalyst that is responsible for a ton of other stuff happening? I feel like that was a definite Butterfly Moment, and I blew it. For all I know, Sixth Floor Guy and I could have been married this time next year, living on our own personal island after jointly launching a company that makes cupcakes for puppies and sold for a billion dollars.

In other words, because I didn't nut up in the elevator last week, I wrecked my life forever.

OK, I'm being a ~tad~ dramatic. Even if I had asked him out, it could have been six kinds of terrible. To quote Taylor Swift for the infinitieth time in my life, "It's gonna be forever, or it's gonna go down in flames."

Still, I think we could all benefit from summoning enough gall to ask out a stranger on occasion. In a weird PLOT TWIST that makes my cowardice even more pathetic, I have been asked out by perfectly nice strangers twice in my lifetime, and both times I was actually kind of charmed and nobody died. It's not as awkward as you think it'll be. Trust me. And if you're still not feeling totally confident about it, take these tips to heart before you go for it:

You can totally tell when somebody's making flirty eyes on the subway versus when they have shoved a book in front of their faces and really, reeeeeally don't want to be anybody's broski right now. If it's the latter, best try not to fish in that particular pond today.

Having the thought "I should ask this human out" just once is enough times to tell you that you need to go do it. This world is freaking huge, Cinderella. Odds are you're never going to see that person again, so don't leave it up to fate. Just go.

3. Get the words out right away

If you beat around the bush, they're going to suspect that you're about to pull out some kind of self-help guide and/or sell them on your newly formed cult. Use your human words as efficiently as possible.

You know what you want, and there's no reason to be sorry about it! They're not going to think you're genuine if you're shrinking into yourself or having second thoughts based on their initial reaction. Assume that when you ask they might double take at first, because it's not the kind of thing that happens every day, but hold your ground.

5. Find some common ground if you can

OK, kidding (mostly). But if you notice something that you have in common with them, or even an experience you're sharing at that moment, latch on to it. It will humanize the weird situation a lot more.

6. Have your phone ready

90% of the time you hit up a stranger to go out with you, you'll both be on your way somewhere, possibly in a rush. Have your phone ready, or if you're feeling super savvy, write down your number before you even approach so you can seamlessly hand it off. That way they have your number, but you're putting significantly less pressure on them. They can think about it before they call or not call you.

7. Be casual about it

Use the tone you would use to ask about the weather or the time, if you didn't have Siri at your finger tips and still bothered to ask people archaic stuff like that. You want to seem confident but not aggressive.

If they continue to look uncomfortable after you have introduced your charming self, they're probably not going to magically become more comfortable with the situation in another minute. Some humans were not made for spontaneous public romance. Be nice, and leave with your head held high. There are plenty more worthy singles in the sea.

9. Pick a place and time

If they say yes, HOORAY! But you're not in the end game yet. If this is the kind of take-your-number-and-dash scenario (i.e., you're somewhere crowded and fast-moving), then walk away and trust they'll get in touch with you if it is meant to happen. If you're in a relatively non-crowded, not crazy place, you should have a time and place in mind to show them you're genuinely interested and not just doing this for kicks.

10. Don't be embarrassed for even a second

No matter who you are or how healthy your self-esteem is, you're risking a real blow to your ego doing this kinda thing, and you should be proud of yourself for being bold. Not a lot of people have the guts to walk into such an unknown with that much vulnerability. You didn't do anything wrong or bad or weird, and odds are if someone says no, they have totally legitimate reasons for it -- they've got a partner, or they're not looking to date, or the whole thing just too them as too much of a surprise. Whatever it is, you can't take it personally. It's a stranger, after all, and you'll probs never see them again.

YOU'RE A STUNNER. No matter what happens you gotta walk off with some mad swagger to either make them look forward to seeing you again, or show them a little bit of what they just missed.

More like this
Are Gemini & Scorpio Compatible In A Relationship?
By Kristine Fellizar
The Most Compatible Life Path Numbers, According To Numerologists
By Kristine Fellizar
15 Ways To Tell Someone Was Just Talking Behind Your Back
By Carolyn Steber
25 Questions To Ask Your Friends When You're Bored
By Lexi Inks
Get Even More From Bustle — Sign Up For The Newsletter