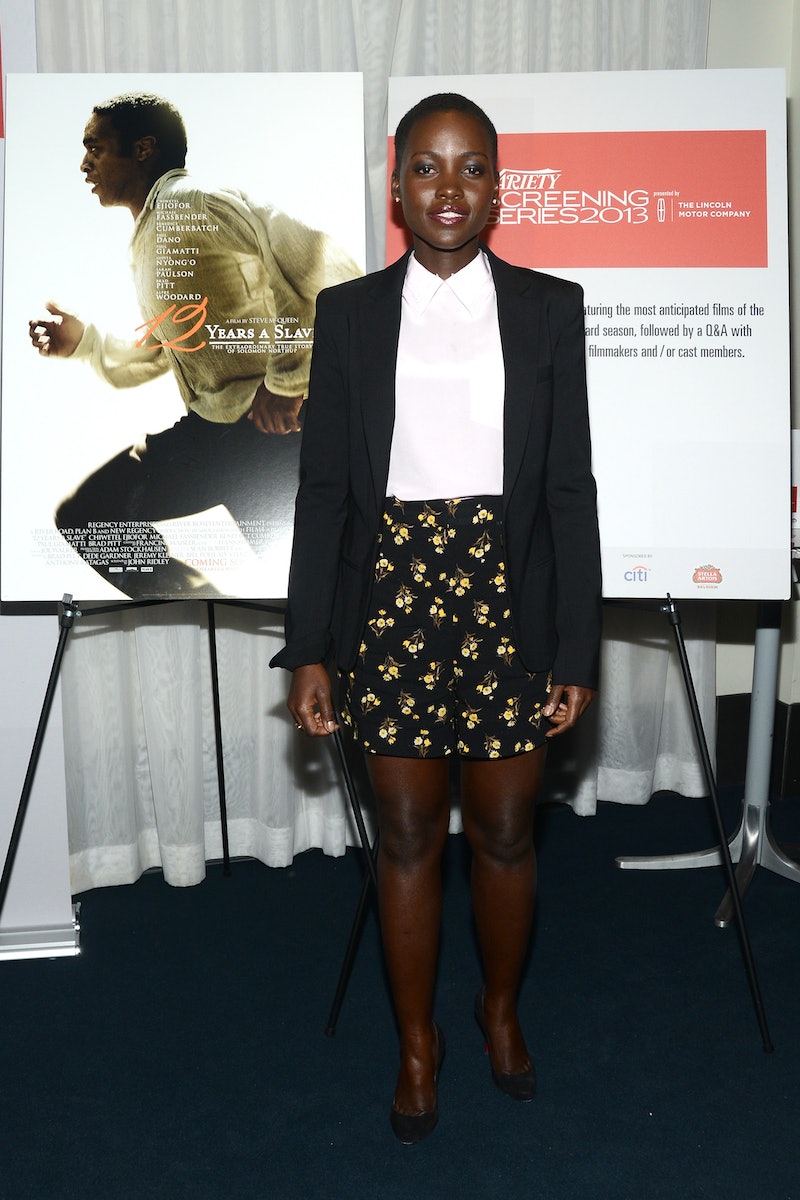 12 Years A Slave just came out Oct. 18, but it's already had months of overwhelmingly positive reviews and anticipation. Some of that attention has finally shifted to one of its stars, Lupita Nyong'o, who plays slave Patsey in her first ever feature film role. Directed by Steve McQueen (Shame), the slavery epic tells the true story of Solomon Northup, a free black man who in was sold into slavery in 1841. Chiwetel Ejiofor, who plays Northup, has been getting a lot of Oscar buzz, but he's not the only talent found in the film.

The large cast boasts an impressive list of names, including Brad Pitt, Michael Fassbender, Benedict Cumberbatch, Sarah Paulson, Paul Giamatti, Quvenzhané Wallis and Paul Dano. Even in this group, Nyong'o has stood out. Here are a few things to know about the actress, so you can brag about being one of her first fans when she inevitably becomes a huge star.

Multi-NationalThough she was born in Mexico, Nyong'o is of Kenyan descent and was raised in Kenya for most of her life, where her father is a politician and professor. She then attended college, and later graduate school, in the United States.

Nyong'o has a very impressive background. She first attended Hampshire College to study film and theater. After returning to Kenya to star in the TV series Shuga and direct her documentary In My Genes, she received her Masters in acting from the Yale School of Drama. She was cast in 12 Years A Slave shortly before her Yale graduation last year, her first feature film.

Inspired by The Color Purple

Nyong'o credited the 1985 Steven Spielberg film with giving her the confidence to pursue acting in an interview with Buzzfeed. "The first time that it occurred to me that I could maybe make a career out of [acting] was when I watched The Color Purple. I saw people that looked like me on camera. I was like, ‘Wow! Maybe I can be like that!" she said.

In 2009, Nyong'o produced and directed In My Genes , a documentary about people with albinism in Kenya. It follows the lives of eight people with the condition that causes a lack of pigment in the body, who are often mistreated in the mostly Black country. The film won praise at multiple film festivals across the world.

Though they costar in 12 Years A Slave, Nyong'o gets excited when she talks about Brad Pitt. The big fan told People, "I'm still trying to get over the fact that my name is being mentioned with people like Brad Pitt. Honestly. When I was cast in his film [I thought] surely I was going to meet him one day. I wouldn't say I was star struck. I was stunned. I was like, 'Yup, this is actually happening.'"

More like this
"Lavender Haze" Star Laith Ashley Breaks Down Filming With Taylor Swift
By Jake Viswanath
Ozzie’s Coming Out Scene With Kitty On 'That ’90s Show' Has Twitter Sobbing
By Brad Witter
Janelle Monáe’s Nonbinary "Coming In" Was About "Truth & Authenticity"
By Brad Witter
Jennifer Coolidge Hunted For Jewels & Lashes In J.Lo’s Hotel Room
By Jake Viswanath
Get Even More From Bustle — Sign Up For The Newsletter
From hair trends to relationship advice, our daily newsletter has everything you need to sound like a person who’s on TikTok, even if you aren’t.