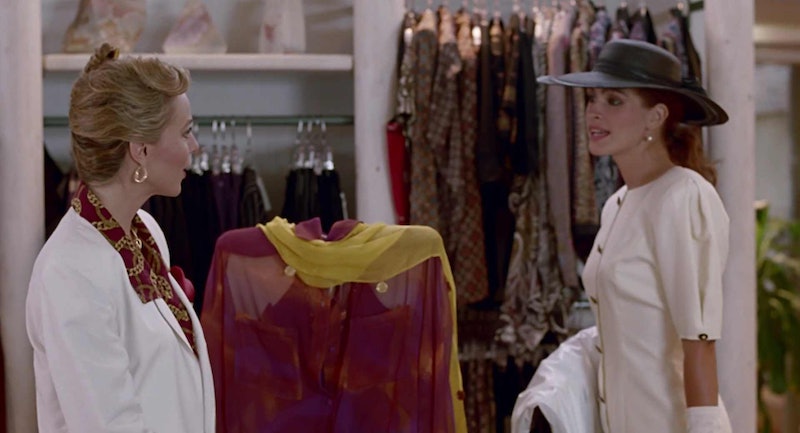 There are a lot of legendary romantic comedies out there, but to me, Pretty Woman will always be one of the best. It has everything — a prostitute with a heart of gold, Richard Gere in his prime, a killer soundtrack. But the most memorable scene in the movie for me will forever be the one that most people remember as the "big mistake. Huge" scene. You know, after Richard Gere's character, Edward, sends Julia Roberts' Vivian shopping, and she returns to the fancy store in Beverly Hills that turned her away when she wasn't dressed like a high class, wealthy woman and laughs in the rude saleswoman's face? It's priceless, and endlessly quotable. "You work on commission, right?" is a question I am tempted to ask anyone who scorns me in the same way.

And even though Pretty Woman was released 25 years ago, that scene is still just as wonderful — and just as relatable as ever. Because honestly, we're all Vivian. Whether you're running into one of our exes, a crappy ex-friend, or an old boss who will live to regret ever firing you, laughing in the face of those who have wronged you will never not be satisfying — and telling them "big mistake. Huge" just as Vivian would will never not be appropriate.

When your roommate used your last K-Cup without asking, and then wants to use your Netflix account

When your friend makes fun of how much you love One Direction, then wants to take your extra ticket to the concert

When your co-worker refuses to cover your shift, and then asks if you'll cover hers the next weekend

When basically anyone asks for a favor from you after they treated you badly, actually

When your sister never returns anything you lend her, and then asks to borrow your favorite dress

When your friends never pay you back for gas, but want you to drive your awesome new car on the next road trip