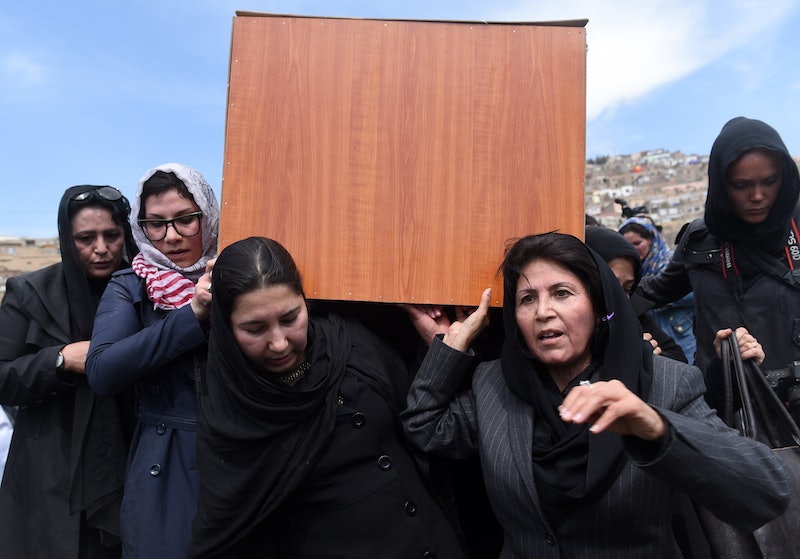 An Afghan woman known only as Farkhunda, who was beaten to death by a mob, reportedly while police looked on, was buried Sunday. Female women’s rights activists disregarded tradition and carried the coffin themselves during the Kabul ceremony. Farkhunda, 27, allegedly provoked her brutal and ultimately lethal assault by burning copies of the Quran, but the country’s top criminal investigator has now confirmed that she was wrongly accused.

Hundreds of people, many chanting “we want justice,” gathered in Kabul’s northern suburb of Khair Khana to lay Farkhunda to rest. President Ashraf Ghani, who has billed himself as a champion for women’s rights, denounced her killing as a “heinous attack” and an “act of extreme violence.” The assault occurred in broad daylight near the Shah-Do Shamshira holy shrine on Thursday, when a group of mostly men beat Farkhunda with sticks and stones, ran over her with a Toyota hatchback, set her on fire, and eventually dumped her body in the Kabul river.

Eyewitnesses told NBC that the attack began after the victim was seen burning copies of the Quran, but the head of the Interior Ministry’s criminal investigation directorate, General Mohammad Zahir, denied these accusations in his graveside remarks. He said:

We have reviewed all the evidence and have been unable to find any single iota of evidence to support claims that she had burned a Quran … She is completely innocent.

According to senior officials, Afghan police have arrested 13 suspects in relation to the mob killing. “No individual is allowed to make oneself a judge and use violence to punish others in degrading manners,” Ghani said in his statement. “Launching personal trials and choosing who to punish stands in clear contradiction to Sharia and Islamic justice.” Nevertheless, the Afghan leader was also quick to condemn “in strong terms any action that causes disrespect to the Holy Quran and Islamic values.” The attack was praised by some — including a prominent cleric at the Wazir Akbar Khan Mosque in Kabul — as a defense of the inviolate codes of Islam.

Mobile phone footage of the deadly attack reveals that police present at the scene of the crime made no attempt to save Farkhunda's life, according to the Irish Times. In response to these allegations, Ghani said the attack spoke of the “fundamental issue” the police face: They’re too focused on combating the Taliban to concentrate on local law and order. “Almost 90 percent of the duties of the police today are focused on fighting, which is not their constitutional role, it is not their legal role,” Ghani told reporters Saturday. The officers' apathy could equally be seen as symptomatic of more insidious problems within the country’s police force.

Kabul’s head of criminal investigation has suggested that Farkhunda suffered from a psychiatric condition, but sources close to the deceased have vehemently denied that. A neighbor told the Associated Press that she had nearly finished a religious studies certificate and was studying to become a teacher. “Everyone respected her, she was very religious and never left her home without covering her face with a hijab,” he said. Farkhunda’s brother Najibullah said the mental illness story was fabricated by their father in an attempt to shield the family, after police advised them to leave Kabul for their own safety.

Having fled in the darkness of Thursday night with the rest of the family, Najibullah told Vice News that Farkhunda had “devoted her life to Islam.” Police investigations now suggest that the deceased had burnt pages of a Persian book rather than those of the Quran. Her family claim that her actions were performed in rebuke of “un-Islamic excesses” that worshippers at the shrine had engaged in. “She always said she wanted to be a martyr for Islam,” her father told Vice, “but not like this.” Najibullah called for the perpetrators to be brought to justice.

There is no assurance of that happening in Afghanistan, where — as The Guardian points out — inequality of the sexes endures despite constitutional guarantees, and rampant violence against women frequently goes unpunished. The recent sudden death of MP Shahla Atta, whose family claims foul play was involved, has not so far warranted a transparent investigation, according to Atta's daughter.

Freshly elected President Ghani made women’s rights and equality a cornerstone of his campaign, after years of Taliban rule had effectively rendered Afghan women second-class citizens. During that era, women were barred from getting a job or an education, and were unable to leave home without a male relative to chaperone them. Despite Ghani’s swift condemnation of the crime and the timely arrest of several suspects, the president has made no real indication that the implicated police officers will be held accountable.

Human Rights Watch, an international advocacy agency based in New York, has called for a probe into the inadequate police response. A senior Afghanistan researcher said:

The brutal murder of a vulnerable woman by a mob on Kabul’s streets might have been stopped if the police had done their job … The authorities need to prosecute those involved in this terrible crime and take action against any police officers who let the mob have its way.