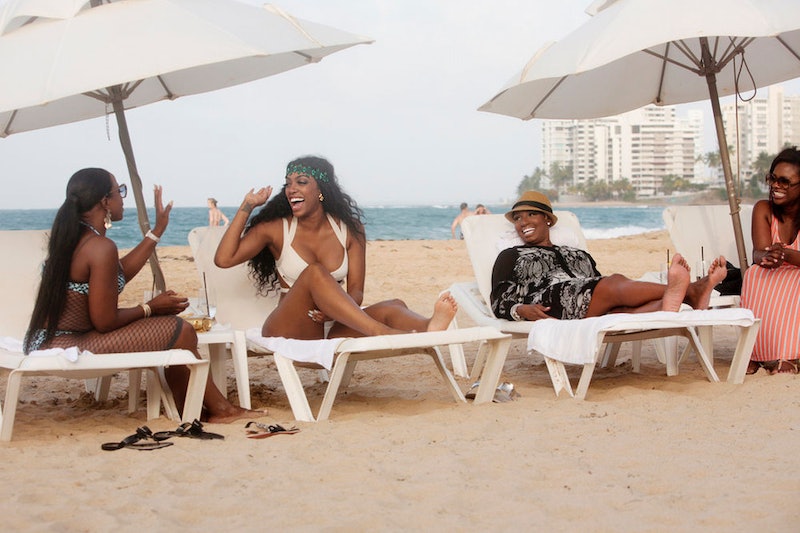 Who would have thought that a therapy session would have prompted a second trip for Season 7 of The Real Housewives of Atlanta? But when Claudia Jordan called up the resident therapist, Dr. Jeff, who just helped shepherd the ladies through a three-episode long personal therapy session, he suggested that The Real Housewives of Atlanta go to the Philippines for the next few episodes. Claudia thinks this will be an opportunity to get along and continue to mend their friendships, and in a flashback, Porsha agrees. Cynthia thinks it will be a chance to find some fantastic hair extensions. Kandi just wants to eat, of course.

But I don't think NeNe is going to make it on this trip. First of all, she didn't have any moments in the trailers, always a bad sign. Straight From the A, an Atlanta gossip site, handily collected all the ladies' Instagrams from the trip, and no pics of NeNe can be found. Then, she did drop that she needs to go to New York for rehearsals in a few weeks in that Gregg conversation. Seems like an easy excuse for her — she'll claim that she needs to stay home and practice her lines, or because she can't be that far from her agent. Because NeNe all but gave up on the show once she tried to walk out of the counseling session. Sign up for a week long trip that's planning to extend that very same therapizing? I'm sure she'll say thanks, but no thanks.

But I'm sure NeNe will end up regretting not going on this trip. Sure, it will be very humid, the flight will be endless, and there will no doubt be at least a few big arguments. But something about being on the other side of the globe is going to give these ladies a pretty big change, at least judging by what Bravo has let us see so far.

While Kenya framed it as the second coming of Mohammed Ali's "Thrilla in Manila" fight, which shouldn't do much to assuage the constant bickering. But shockingly, in the preview for the trip, they showed Kenya and Phaedra embracing while teary eyed. Not grabbing one another by the ponytail and punching, but actually hugging and pledging to make up with one another. I'll believe that... when we see it without the aid of Bravo's crack team of editors chopping things up.