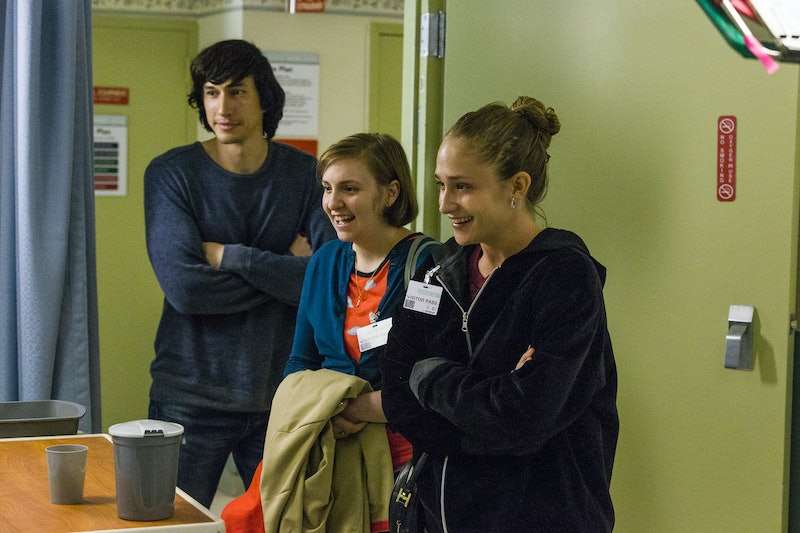 For once in its life, Girls wasn't the subject of a thousand think pieces and half-cocked criticisms. Yet, as I think about the way in which the Girls Season 4 finale felt as a whole, I kind of miss when the show was the only thing we could all talk about. "Home Birth" felt like it could the Girls series finale, but in a way that actually makes Girls Season 5 and beyond a truly delicious prospect. Our girls (and friends) finally got it together, but unlike the Season 2 finale (which sent my head into my hands when Marnie got back together with Charlie to make babies and Hannah was rescued like a damsel by Adam), this "togetherness" felt real and true. It's the thing that drew me in when I first fell in love with Girls, it's the thing that's made me hate Girls on occasion, and it's the thing that made Season 4's ending so damn invigorating.

The season ends with Hannah rejecting Adam, who's just been dumped and swears he misses her and made a mistake. Six months later, she's with Fran and they could be on a postcard about what it's like to be in love in Brooklyn in the winter. It all seems very healthy, and very New Hannah. Jessa is forever changed by helping Laird and Adam's sister get to the damn hospital when the water birth method goes to crap and she's finally chosen a profession she's interested in pursuing: She wants to be a therapist (it's unrealistic, but aren't all directional epiphanies at first?). Shoshanna finally gets a job with all the experience she gained running Ray's campaign, but the job is in Japan: She decides to take it even though her boyfriend Jason Ritter makes the expected romantic overture asking her to stay (...and work for him... because he's "almost in love" with her). Marnie is ditched by Desi at their big set for the ultra elite music blogs of Brooklyn, but Ray helps convince her to perform all on her own and she kills it (well, if you like the way Marnie sings, but that's really a matter of taste).

Despite Soup Boyfriend and Adam's romantic overtures (and let's not forget Ray's "romantic" and "heroic" speech to Desi about making Marnie happy) that were clearly written to feel like that moment when the heroine throws herself into the guy's arms because this is just so freaking romantic, the season thankfully didn't end with happily ever afters fit for CW dramas. Sure, Hannah had a romantic end, but that felt more like a representation of a relationship that might actually be healthy for her (whatever Adam was, he wasn't often good for her) rather than a relationship for relationship's sake.

As the episode ends, we see Hannah talking to her mother, who's ranting about Hannah being smart and not giving up her whole life for one man who could ruin it (clearly, Hannah's dad coming out is still giving her a rough go). There's a clear contrast here about all of these young women putting their own ambitions and emotions above their relationships — Jessa's a lone wolf, Hannah ditched Adam, Shosh chose the job over a guy, and Marnie got out of Desi's shadow — but I don't think that "the Girls ditch their dudes" is the truly exciting part of the episode.

In the end, all these women who we've agonized over the way we'd lose sleep over our own friend's bad decisions have finally started to make good decisions and decisions that are truly for themselves. (Sure, it's unusual that they're all doing it at the same time, but let's give fiction the teesny bit of leeway that we've bought into here.) Heading into next season, we're left with a million exciting questions: Is Hannah still teaching? Did she get better at the over-sharing thing? Is she better, in general? Did Marnie really dump Desi? (Please let it be "yes.") Is she succeeding on her own? Did Shoshanna's job keep her in Japan or was it temporary? Is she killing it (because she totally killed it as Ray's campaign manager)? Did Jessa take any steps towards becoming a therapist? Season 5 is not going to be business as usual; it's going to be a completely new chapter and that is incredible news.

Regardless of relationships or lack thereof, these characters are moving forward and they're going to take the series with them. Many of the complaints this season were about how Marnie kept making the same mistakes with Desi; how Hannah was still such a mess and still making bad decisions; how Jessa is clearly still aimless (ahem, Ace, and that peeing in the street issue); and how Shoshanna was nearly willfully stagnant. But Season 4 proved that we should trust in this show. If it made sense of Season 2's fairytale ending and figured out a way to make Hannah's infuriating behavior at GQ have a point, it was going to make sense of all the girls' Season 4 failings and flailing.

And the result is what may be my favorite season finale of Girls ever.

More like this
The 'PLL: Original Sin' Creators Say A’s Identity Will Be “Very Clear” By The Season Finale
By Alyssa Lapid
Does 'Locke & Key’s Ending Mean There Could Be A Season 4?
By Sophia Moore
Netflix Reveals First Look At Wednesday In The 'Addams Family' Spinoff Series
By Bustle Editors
Josh Peck Shows Love To Jennette McCurdy After Her Shocking 'iCarly' Revelations
By Radhika Menon
Get Even More From Bustle — Sign Up For The Newsletter