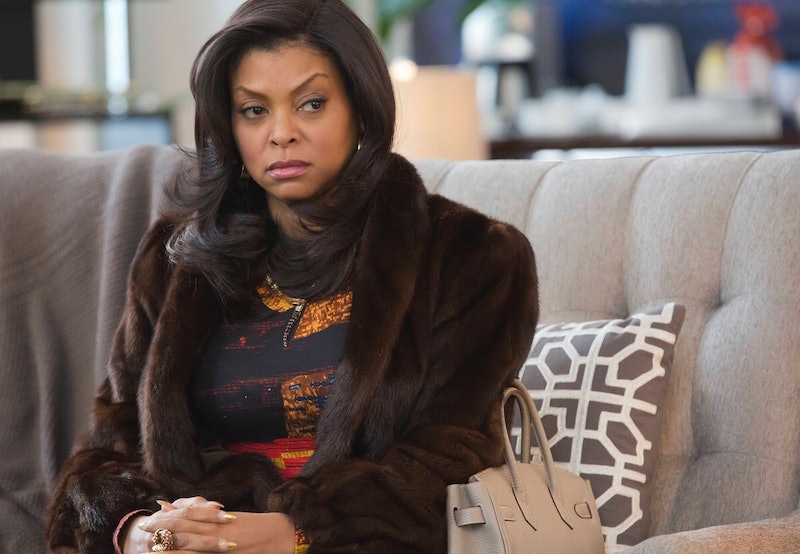 If you've so much as heard of Empire by now, then you know that Cookie Lyon from Empire is the breakout star of the show. Played by Taraji P. Henson, Cookie is the matriarch of the Lyon family who begins the series being released from prison early and begins her quest to get her family, and her company, back from under Lucious' abusive iron fist. However, above her sassiness, above her determination, and above her one-liners, Cookie has become a beloved character because of her heart. She is the true heart of the show, Olivia Pope-ing the lives and careers of those around her. And, okay, she causes as many problems as she resolves, but, hey, at least Cookie has a one-liner ready for even the worst of times.

Just as important as her one-liners are her words of wisdom. A lot of the words that come out of Cookie's mouth are hilarious, but a lot of them are also inspirational. We don't have to try to emulate Cookie exactly — most of us should try to avoid prison and wandering around with a gun in our purse — but the advice that she gives, intentionally or unintentionally, is incredibly sound. If you want to live a more Cookie Lyon Lifestyle, check out some of her words of wisdom below.

"Nothing good can come from loving you."

Sometimes, there's that bad boy that you just know is all wrong for you, but that you can't help being drawn in by anyway. But Cookie has a (sadly) unique distinction on TV of being one of the few heroines who gave Lucious one chance to do things right by her and then kicked him to the curb despite his pretty words when he hurt her once more. I don't advise anyone attempt to kill the bad boys in their lives, but, hey. Stay strong, Cookie.

"Listen to me. You're different. OK? It's only something mama knows, but it's gonna make life hard for you sometimes. But I want you to always remember I got you."

Everyone in the world has their differences, but the world makes it hard on them to be themselves. Cookie might not always have the right attitude about it — see her initial reaction when she found out that Andre was bipolar — but she always works hard to do right by her children and support them in whatever way that she can. So, too, must we support the people that we care about through thick and through thin. That's the very definition of family.

Cookie might have had financial gain in mind when she said this to Tiana, but the fact still remains that she is one of the least judgmental characters on the entire show. All of Cookie's beefs come as a response toa slight — perceived or real — that has been perpetrated against her; very rarely does she ever cast the first stone out of anything other than innocent insensitivity. If we can be as open-minded as her, we can do anything.

"This b**** planning how to steal everything you got, which is everything I got, and I'm not finna let that happen."

Listen, Lucious' Empire is all well and good, of course, but Cookie's entire life has been invested into it. There's nothing wrong with caring about saving something because losing it would affect you first and everyone else second — especially when the person who has the most to lose is your jerk of an ex-husband who seems to conspire new ways to screw his own family over. Take care of yourself first, guys.

"Just 'cause I asked Jesus to forgive you don't mean I do."

There is a time to forgive and forget, and then there's a time to do neither. Cookie encourages us to bless our enemies while continuing to hate them with all of the fiery flames that hell has to offer, which is not a bad life plan. Somewhere between holding an eternal grudge and turning the other cheek is Cookie Lyon.

"You lose your soul when you feel like the world's forgotten you."

The inspirational life advice here comes when you acknowledge that Cookie has felt this way, and managed to completely turn her life around to the point where she is a producer with a rapidly rising reputation who has more money than she ever did before and during prison. Even when you hit your lowest point, there is a light just around the corner, and Cookie is leading the charge.

"I know you didn't just tell me to behave myself."

Ladies, never let any man tell you how to behave. Especially when that man is Lucious Lyon.

"Yeah, difficult. I know that word. You see, y'all like to toss us to the side when you can't control us anymore because you're lazy and you don't want to do your job."

There are so many words that are thrown around to describe women that are usually completely unfair. "Difficult," "emotional," "crazy" — the list goes on and on. Cookie knows that those kinds of labels are absolute crap, and it was her understanding of that which helped her get through to Courtney Love. At least until Anika ruined it. Above all else, Cookie Lyon encourages us all to be ourselves and ignore what the world thinks. That's a life hack we should all get behind.