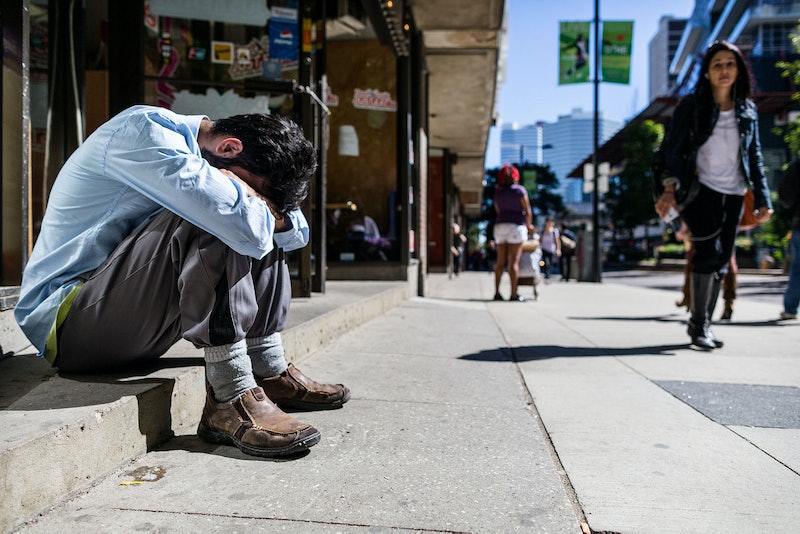 One of the most frustrating things a man can do is claim that he's a victim of sexism. Men's rights groups who espouse the systemized oppression of men are ridiculously wrong in their philosophies. Sure, men might experience discrimination, bullying or even disparagement of their gender, but this doesn't equate to sexism. Sexism is institutionalized. Having someone be biased towards you in an isolated context, for instance, a woman excluding a man from something based on his gender, is simply mean or discriminatory, because it's an individual act, rather than one that's historically ingrained in the way society operates to the detriment of men. It's the exact same "nope, not even close to the same thing" comparison that happens when white people assert that they've been victims of racism: That is literally not possible, because you are in the privileged majority. If you think that isolated instances of feeling slighted or discriminated against amount to having the entire balance of favor in society stacked against you, then you're self-involved, ignorant, or at best, misguided about what words like "sexism" and "racism" actually mean. The fact is, if you're a white, straight, middle-class man, then society operates in your favor, regardless of any instances of discrimination. You always win. Congratulations, you are the lord of the genetic lottery, so give chance a giant hug for making your life so easy.

I believe that gay men and trans women do experience sexism, too, so for the purposes of the following points, let's assume we're talking about straight, cisgender men who adhere to strict gender binary. Because as well as sexism, the LGBTQ community experiences all kinds of bigotry, and I do not mean this to diminish that at all. What I am saying is that when men start crying "poor little rich white guy!" it can be incredibly frustrating to hear, as a woman, who you know, is threatened by cat callers every time she leaves the house, has to worry about not being paid the same as her male counterparts, and who's inherited a long and troubled history of discrimination through ownership, objectification and disenfranchisement.

1. Because men have the power

It doesn't take a very deep look at the way society operates to see that men hold the power. From the top echelons of society, they're in control. Last year it was reported by the New York Times that of 200 of the top paid executives in the USA, only 11 were women. We've never had a female president. Women are consistently paid less than their professional male counterparts. And then there's the much more subversive: the physical power of men. Rape and domestic violence statistics support this, with 85% of reported cases having female victims, while only 15% are men. As I mentioned above, being constantly catcalled is an assertion of male power and provides a constant perceived threat, even if there's no actual physical violence. These are just several examples of how men have power and women do not in society today. So even if a man feels marginalized once because of his gender, it's not a consequence that he subsequently lives his life at a disadvantage because of his gender. And even if he has massive disadvantages/is subject to constant discrimination, it's probably due to other factors that have nothing to do with gender, like race, sexuality, religion, education and economic status.

2. Because of historical context

It took decades for women to receive the right to vote, and weren't able to nationally in the U.S. until 1920. Think about that. That means that every law, and indeed the very founding of this country, was done entirely without women's interests in mind. Obviously there are other groups who were equally left out, so for women and also many of these groups, we're STILL fighting to have the systems of the country we live to reflect our needs. Historically the way this country (and many others) operates has ALWAYS reflected the interests of men. Because it was BUILT BY MEN, who until very recently, didn't believe women had the right to take part in public process. Sexism requires this level of institutionalized marginalization, which is something a man can never claimed to have experience based entirely on his gender and gender alone.

3. Because of the way established institutions operate with gender bias

Pursuant to the above, as a result of the country's history, many of its institutions are "boys clubs" which favor men. While these institutions might discriminate against men on different grounds, the only gender that finds itself pushed aside is the feminine. For instance, the way marriage operates still suggests ownership, and it wasn't until 1993 (yes, you read that right, 1993) that rape in marriage was criminalized in all 50 states. That means that just over two decades ago, probably in your lifetime (definitely in mine) a man could have non-consensual sex with a woman who was his wife with no repercussions. The residual effect of this still exists in the way marriage work: During the engagement period the woman alone wears a ring, and traditionally will take the man's name in marriage. These are subtle throwbacks to remind us of the gender bias of commonplace institutions, again, something which men do not experience based on gender alone.

4. Because "opportunity" for a man is never hampered by gender

Men face challenges in life. They overcome difficulties. I have nothing against men being proud of overcoming hardship, or feeling like they've been unjustly treated. These are all valid things that happen to men. But they do not happen on the basis of gender. Men aren't precluded from the job market because one day they might have children, and therefore place a burden on their employer for seeking paternity leave (which, if you ask me, should be readily available to men, although only once we've established an acceptable level of care when it comes to maternity leave!). No one is, consciously or unconsciously, not hiring a man because he is a man (unless that job is for something very specifically female, like surrogate mother. Sorry, dudes.). I've talked about overt gender bias above, but there's also less obvious bias, that comes simply in the way in which people treat one another, and help one another. Men are taught from a very early age that they can be and do anything, and that they're entitled. Women, still, are taught to be apologetic and softly spoken as an ideal paradigm for female behavior. These things all coalesce to affect the way we pursue, and are offered opportunities, and gender definitely effects what is made available to women and what is made available to men.

5. Because "discrimination" is not "sexism"

I really want to hammer this point home, because if a woman says to a man, "I don't like you because you're a man," she's just being a bully. She's discriminating against him, yes. But that's not the same as sexism. Our "-isms" require a rich, ugly history to precede them. They require marginalization en masse. They require everything spoken about above, including the institutionalization of bias. THERE IS NO HISTORY OR INSTITUTIONAL BIAS AGAINST MEN ON THE BASIS OF GENDER. It does not exist. Men: Learn to determine the difference between being discriminated against in an isolated context and being subject to a constant, sometimes obvious, sometimes subtle disadvantage that has plagued your entire gender group for centuries and across the board in all facets of daily life.

6. Because straight, white, middle class men are the most enfranchised group of people in the world

If you're one of these, you've got the ability to get the best jobs, make the most money, be approved for credit cards, get the apartment of your dreams, take out loans, go to any school, receive unencumbered health care, run for office, become a CEO, freely move about in public unhindered, speak your opinion loudly and without opposition or with respectful opposition, get away with crimes other people couldn't get away with, be physically dominant, etc. And you get to do all these things without anyone questioning you, diminishing you, or reducing you because of your gender. So therefore, you cannot experience sexism. And being told you can't experience sexism IS NOT SEXISM. The primary point is, after reading all this: Why would you even want to experience sexism? It's not a pleasant or happy thing to claim. Maybe just be happy we don't have institutionalized sexism against men, and use your position of power to work towards re-building a society in which NO ONE is sexist, racist or bigoted against a group of people in any way, and everyone has equal opportunities to contribute to society and to be benefitted by that society.