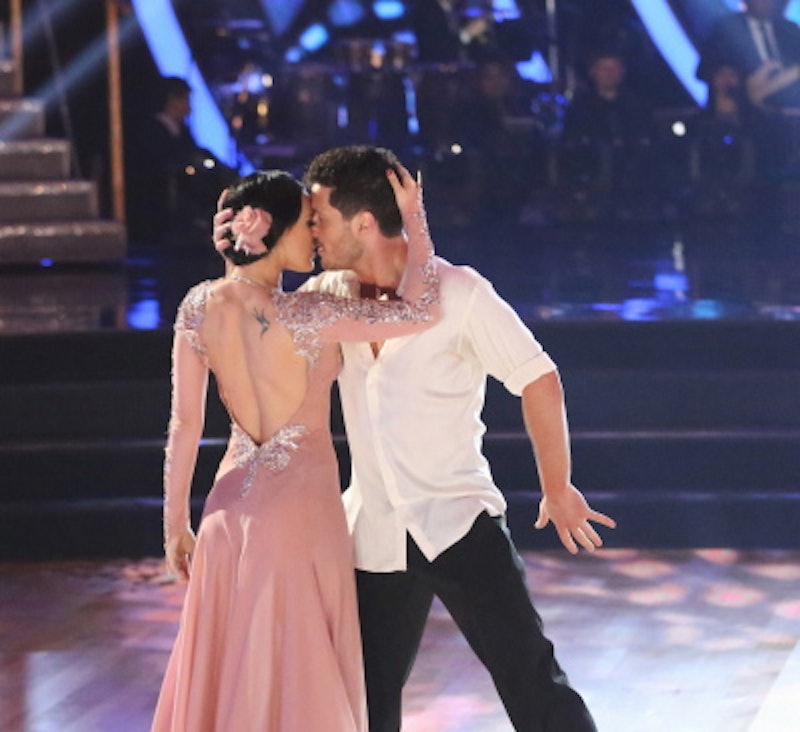 Every season of Dancing With the Stars comes with its own set of dating rumors. Maks & Meryl, Val & Janel, and now Val & Rumer? Season 20 has only just begun but fans are already questioning whether Val Chmerkovskiy and his partner Rumer Willis are dating. It's not unusual for a Chmerkovskiy brother to be at the center of these relationship rumors. Passion basically runs in their blood, and they know all too well that romance can be the key to winning — even if it's not real.

Last season on DWTS, Val was again the subject of rumors, that time with his partner Janel Parrish. Their behavior on and off the show lead many to believe they were more than just friends, and it worked in their favor. They made it to third place on the backs of votes from fans who were desperate to see them together. Their chemistry was off the charts, and so far things are looking similar for Rumer and Val this time around. The pair scored the highest during the show's opening night with their touchy-feely foxtrot, and the fans were loving it.

But because we apparently can't have two adults near each other in Hollywood without some kind of romance rumor springing up, their fancy footwork made some people suspect (or hope) that maybe Val & Rumer were this season's Val & Janel. (Who were their own season's version of Maks & Meryl. Oh the drama of DWTS.)

So is the pair dating in real life? They were asked about the rumors already popping up, and if you were hoping for a straightforward answer you're not going to get it. When asked by E! News if he was single Val declined to respond. "I find that such a weird question to ask. I mean it's so personal," he said.

But in another interview with E! he did acknowledge that in general the show does have conditions ripe for romance, which is how it's created real-life couples over the years. "Your world shrinks to just the show and the people involved in the show. Obviously your relationship with your partner and the camaraderie that you've built is closer than anybody on that show," he said. Rumer agreed saying, "[It's like] you're at summer camp and there's this group of people that you're with all the time and you have no life outside of there, so you're like, ‘Oh, hey. Yeah, this is a great idea.'"

The biggest thing to focus on this season for both the pair and their fans is not letting the rumors get in the way. It doesn't really matter if they are dating or not, it just matters that they come out every week and dance their best.