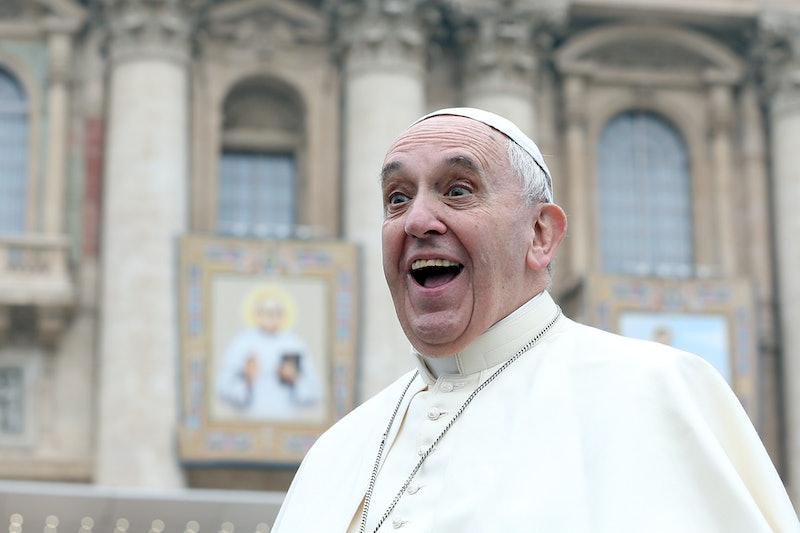 It’s what we all dream of — getting a pizza hand-delivered to our car and then continuing about with the day. That’s exactly what happened to Pope Francis on Sunday: a local pizzeria owner in Italy hopped a barricade and gave a pizza to the Pontiff as his motorcade drove by. Unsurprisingly, Pope Francis took the pizza delivery and kept on with his itinerary for the day.

The entire delivery was captured on video and shows the pizzeria co-owner of Don Ernesto’s in Naples, Italy, Enzo Cacialli, flawlessly handing off the pizza to the Pope without any security guard stopping him. The pizza itself was topped with yellow tomatoes, buffalo ricotta, mozzarella, and provolone cheeses, as well as dough that spelled out “Viva il Papa,” which in translation means “Long live the Pope.” Photos of the pizza can be found on the pizzeria’s Facebook and Instagram pages, including one of the most epic deliveries made in human history.

It begins with Cacialli being helped by his fellow workers over the barricade. They're all excited and giggling, unable to contain their enthusiasm. Thankfully, the dude holding the pizza is steady as a rock.

The motorcade begins to roll down the street and Cacialli grabs the pizza out of his fellow pizzaman hand's and gets ready to make his most important delivery yet.

Within seconds, the Popemobile starts to make its way down the street and Cacialli, plus the group he's with, start shouting "Papa! Papa!" Pope Francis bends a little, grabs the pizza, and gives a smile to Cacialli.

The crowd cheers, Cacialli claps, and the Popemobile keeps driving away with a pizza on board. You can watch the 49 seconds of pizza glory below.

While the idea of giving pizza to Pope Francis may seem like a joke or viral stunt, it actually meant a lot to Cacialli. “Giving a pizza you made with your own hands to the Pope is very emotional,” he said to CNN. “It’s really hard for me to express the value of this gesture for a man we really love and value, for a beautiful person full of humanity.”

There’s no word yet on whether or not Pope Francis actually ate the pizza and enjoyed it. But considering he misses being able to grab a slice on the go, there’s a good chance he devoured the personal pie in minutes. After all, Pope Francis is just like us — and who doesn’t love a good pizza?