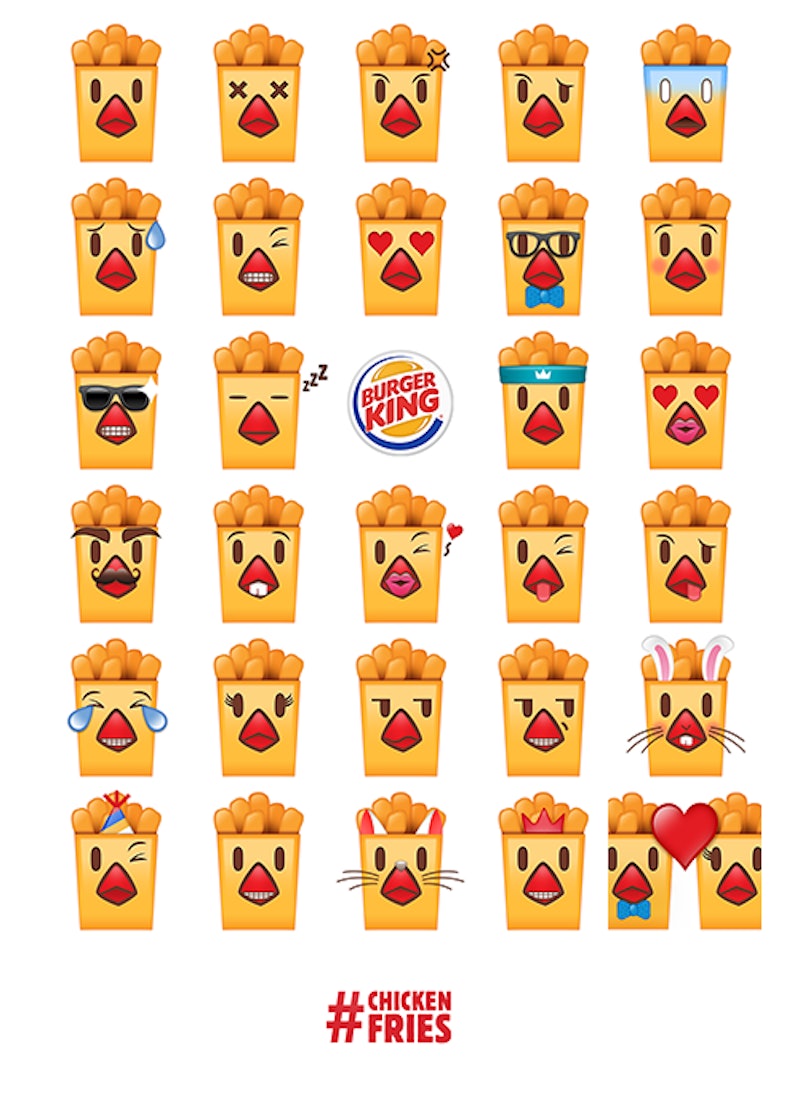 As you may have heard, Burger King's Chicken Fries are back on the menu as of today — and what's more, they're here for good. But what you may not have heard is that Burger King is promoting the return of their prodigal fowl in the most hilarious way possible: A Burger King Chicken Fries emoji keyboard. You heard me. You can now pepper your text message conversations with smiling, sunglasses-wearing, and lovestruck cartoon chickens. That's exactly what you wanted, right?… Right???

Because obviously the only thing I could do upon discovering this piece of news is add to the increasingly bizarre collection of emoji keyboards I currently have on my phone… so I downloaded the app. And you guys? It is nuts. So nuts that, in addition to regular ol' emoji, it also includes animated GIFs. I'm not kidding. I have been sitting here with the app open, watching a chicken wink at me for the past 30 seconds, purely because I find it so freakishly fascinating that I can't look away.

So here —in celebration of the return of Burger King Chicken Fries and the launch of this weird yet amazing app, have a brief history of Chicken Fries in the style of VHI's Behind the Music. It's illustrated with Chicken Fries emoji, of course. Because, I mean… what else are you going to do with it?

In 2005, Chicken Fries burst onto the scene — and, somewhat surprisingly, became an instant success. Whether or not the fried fowl had any real talent in the fast food arena remained to be seen; indeed, at first glance, Chicken Fries' schtick seemed much the same as many other chicken strip would-bes who had come before it. However, there can be no denying that Chicken Fries' managers knew what they were doing: The new kid's image was fresh and fun, yet far from childlike. No wonder young adults who had only recently let go of their more youthful years latched onto Chicken Fries' tune so quickly: It satisfied snackers while making itself easily accessible, thanks to the ingenious cardboard container that fit right in your car's cup holder.

For the period between 2005 and 2012, Chicken Fries remained at the top of the charts. Although it might be argued that Chicken Fries only rehashed old hits, rather making any new innovations, its success followed a familiar theme: Give the people what they want. And the people wanted Chicken Fries.

Alas, though, despite Chicken Fries' well-documented popularity, all good things must come to an end. In 2012, the fast food star's management announced that it would be taking a backseat to a younger, newer act. Was Chicken Fries' lack of innovation to blame? Had its swift rise to prominence somehow given it an expiration date in the process? Had its hard-partying lifestyle caught up to it? Or had it merely outstayed its welcome? Chicken Fries itself stayed tight-lipped about what had gone on between closed doors, so its fans were never to know. Whatever the case, the aging chicken snack stepped out of the spotlight and faded into a quiet retirement.

Several years later, though, Chicken Fries decided enough was enough. It launched a limited comeback tour in 2014, and to its delight and surprise, its fan base was still intact. The tour was a sell-out success, and it left Chicken Fries fans everywhere clamoring for more. Chicken Fries itself seemed to be in better shape than ever — so when the former fast food idol's former management team came knocking, it knew that now was as good a time as any to get back in the saddle.

If you want to experience the Chicken Fries emoji keyboard yourself, nab it for free on the iTunes App Store or the Google Play store.