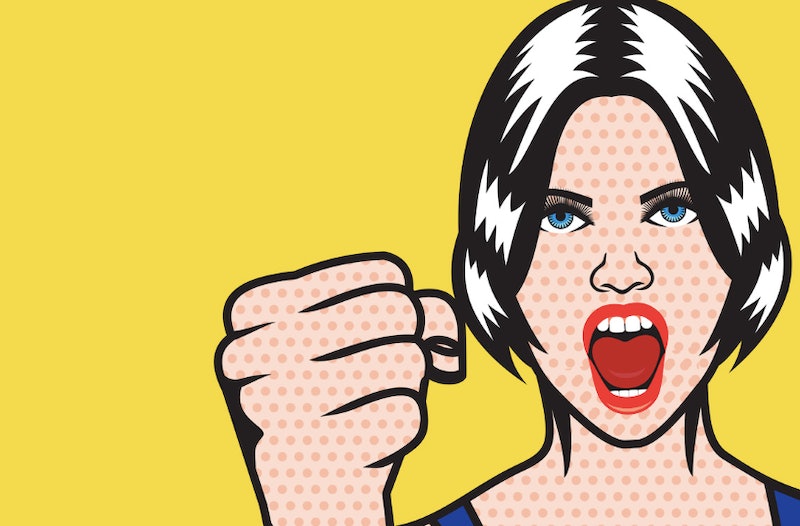 Have you ever called someone out, then had them twist it around and call you out right back? Anyone who has tried to bring attention to sexism (or racism, or homophobia, or anything of that nature) can probably relate to the frustrations of pointing out a double-standard or microaggression and being accused of overreacting or “reading too deeply into it.”

While I’m all for friendly debate, some debaters aren’t trying to engage with your position — they’re trying to dismiss it. Here are some cheap tricks I’ve seen people use to dismiss feminism and what you can say to defend yourself if they’re willing to listen.

What it sounds like: “You’re overreacting.” “Offense is taken, not given.” “Nobody can make you feel anything without your permission.” “Sticks and stones can break your bones, but words can’t hurt you.”

People use gaslighting — making others doubt their own perceptions and blame themselves for their emotional reactions — to dismiss not just feminists but also anyone who calls them out. This tactic may be couched in supposedly wise platitudes about thick skin, but don’t be fooled: It’s really an excuse people use to say anything they want without taking responsibility for the consequences. By encouraging you to develop thicker skin, they’re skirting the real issue: that it takes thick skin to deal with their comments. How easily you take offense and whether or not they’re giving it are two separate questions.

Unless you know that you’re really reacting to something other than the person triggering you — and unless you’re totally delusional, but I’m going to give you the benefit of the doubt there — the person who offended you is responsible. If someone throws a punch at you, you’ll get a bruise; if they hurl careless or hurtful words at you, you have the right to get upset. And you have the right to be heard.

A recent Girls episode presented an excellent example of gaslighting feminists. When Hannah points out that a man in her writing class has only named male authors as exemplary, he responds by calling her “hysterical.”

Noticing sexism where others might not doesn’t make you hysterical; it makes you perceptive.

How to respond: I’ve fantasized about giving gaslighters sassy responses like, “I suppose I don’t share your ability to control your reactions to everything. Have you tried walking through fire?” Alas, a better-received response would probably be to point out that the gaslighter is also human, can’t control their reactions to everything, and has surely taken offense at something at some point. Ask how they’d feel if they were gaslighted in that situation.

What it sounds like: “Our society puts unrealistic standards on men, you know.” “You don’t know what it’s like to be a man, so you can’t say women have the shorter end of the stick.”

Yes, I can say it because I live it every day. There are statistics to prove this, and there are lived experiences to prove this. One consolation of the shittiness of being a woman in our society is that I understand sexism on a deep, personal level — and I deserve the chance to share that understanding.

I absolutely sympathize with men’s struggles with gender stereotypes, and I’m angry about the dismissal they face when they are victims of abuse. But as this video aptly puts it, when someone’s house is on fire, you don’t tell them that people also die from drowning — you offer them a hose.

I don’t know what it’s like to be a man. But since our society depicts male perspectives as default and universal, they are far more accessible to us than those of women, gender-queer people, and others whose experiences are erased. Men and other privileged groups have a lot to gain from listening to these systematically silenced voices.

How to respond: You shouldn’t have to statistically prove your oppression, but if you’re trying to convince someone who is dismissing your lived experience, it might be helpful to have some statistics on the wage gap, underrepresentation of women in leadership positions, or sexual harassment up your sleeve.

What it sounds like: “You’re just looking for sexism.” “Are you sure that’s not confirmation bias?” “You’re nitpicking my language.” “You’re reading too deeply into it.”

If you strip these comments down, the accuser is implying that, as a feminist, you are paranoid and incapable of being objective. After all, if you’re thinking critically about the issues our society faces and looking at the media skeptically and questioning people’s assumptions, how could you possibly be trusted to accurately report events or say anything perceptive, right?

Similar to gaslighters, those who accuse feminists of paranoia act as if you walk around wearing sexism-colored glasses so that you can criticize everyone around you for being sexist.

Or perhaps, people are just being sexist.

How to respond: You shouldn’t have to prove that you’re not suffering from paranoid delusions, but as with men’s rights activists, having some statistics handy can be helpful if you’re up to the challenge.

What it sounds like: “We all bleed the same color.” “We should think of people as people, period.”

Because your testimony of the oppression and discrimination you have faced does not fit with this person’s picture of a genderless, raceless, classless world, they will outright erase and deny it.

This resistance sometimes comes from confusion between description and prescription. When people hear you describing a world where people are categorized and bringing the experiences of specific categories to their attention, they worry that you’re perpetuating these categories. You’re not. You’re just talking about them.

How to respond: Explain that though you share the hope of a world in which everyone of all races, classes, and genders holds hands and sings Kumbaya, it’s not the world we live in, and we have to address current problems specific to women and other marginalized groups in order to arrive at this future.

What it sounds like: “Men are better at math.” “Women are more emotional.” You know the drill.

Studies on differences between men and women abound in the media, but many are based on dubious evidence or don’t justify the inequalities that sexists use them to support.

It’s important to remember that culture shapes our brains and behaviors. Rather than using studies on gender differences to prove that men and women should be treated differently, we can use them to illuminate the unequal treatment that contributed to these differences.

For example, some fascinating psychological studies have shown that parents perceive and treat boys and girls differently from infancy. Even when they were actually observing boys dressed as girls, adults still perceived the “girls” to be more social. They also underestimated their daughters’ climbing abilities while guessing their sons’ accurately. These different perceptions, which come into practice immediately when parents hold their children differently at birth, become self-fulfilling prophecies.

How to respond: Point out that science also shows that gender differences can be culturally ingrained, and we should be careful not to validate the sexism that ingrains them by calling them natural.

You can also mention that even when gender differences exist on average, there’s a ton of overlap. In fact, there’s more variation between different women than there is between the average man and the average woman. Generalizations often ignore other factors such as race, class, and cultural upbringing — not to mention that they erase trans people by conflating gender with chromosomes. Discussions about gender differences can be useful, but only when they are contextualized within the culture that produces them and acknowledge the other identities gender intersects with.

What it sounds like: “Are you saying that women are superior?”

“Are you saying that men aren’t victims of domestic violence or sexual abuse?”

Nope, didn’t say that either.

“Are you saying that men and women are identical?”

Can’t recall saying that one either.

These tips are all well and good if you want to go there, but remember, it’s not your job. Anti-feminists, men’s rights activists, and serial gaslighters aren’t always the best listeners, so simply disengaging with them is sometimes the best option — especially if you’re being trolled online.

More like this
25 Inspiring Quotes From Black Women To Celebrate Black History Month
By Kyli Rodriguez-Cayro and JR Thorpe
24 History-Making Black Women You Probably Didn't Learn About In School
By Ayana Lage and JR Thorpe
6 Organizations Fighting Police Brutality That You Can Support Right Now
By Syeda Khaula Saad and JR Thorpe
15 Black-Owned Liquor & Wine Brands To Add To Your Bar Cart
By Alexis Morillo
Get Even More From Bustle — Sign Up For The Newsletter
From hair trends to relationship advice, our daily newsletter has everything you need to sound like a person who’s on TikTok, even if you aren’t.