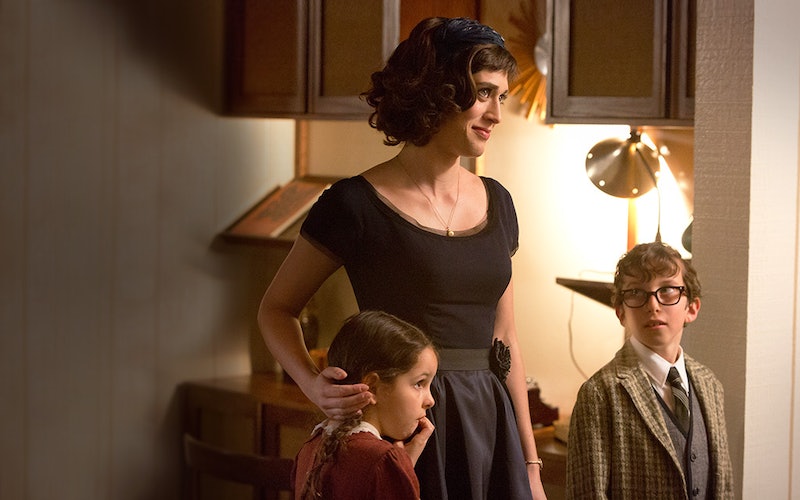 The primary plotline of Masters of Sex has become, "There's this sex study that's controversial… and everyone is in love with Virginia Johnson." Which begs the question: When is someone going to write the Manic Straight-Talking Dream Girl think piece? This would likely center on whether it means that millennial men are finally ready to accept that women and men are finally equals (except for the wage gap, that pesky thing), or that the men are so downtrodden by the economy and globalization or whatever, that they're looking for a mommy figure who will lead when they're dancing. Poor, poor put-upon things.

Virginia Johnson's old hubby is back in town after a canceled gig and running out of money. George sends the babysitter home and plans to make spaghetti for the kids, but that fails and turns into cereal by the time Virginia gets home.

The kids are apparently already in bed, because George quickly seduces Virginia and, the next morning, confesses that he can't go home because he's three months behind on rent and the locks have been changed. He asks for money, and when Virginia says she barely has enough to pay the babysitter, he offers to babysit for a lot less. "I'm not paying you to babysit your own children!" she screams.

Libby is pregnant and happy and when people are pregnant (or its New York-in-2013-corollary, in a relationship) and happy, they like to set people up. Libby doesn't know that Ethan and Virginia have had sex and that he slapped her, so she thinks it's time for some coupling.

Ethan gets drunk and tries to win Virginia over. She gets outraged. He leaves (with his BAC probably far above safe driving levels) and goes home where the Provost's daughter — who has harbored a crush on him since she was 16 — is waiting for him.

They go inside and he utters some A1 pick-up lines like: "Sometimes I have girls over and never turn the lights on. What you think about that? You like it with the lights off?" and "You ever been with a boy you didn't like all that much and pretend that you did? Did it work?" and "You feel like taking your sweater off?"

Ethan licks some booze off the Provost's daughter's boobs (in not a sexy way) and then gets called into work. He vomits just before going in to deliver a baby.

Somehow, the Provost's daughter forgives him the next day for being a total creep.

Somewhere in between, Masters' mother comes into town and we get a little color into his past. His father (dead) is revealed as being abusive, and his mother just let it go. Masters' mother is a surprisingly complete character who has now stopped mourning and even has a Tom Collins or two. And one of the best cinematic tricks is pulled at the end of the episode, with sound design mirroring two scenes: One featuring Masters' mother in the kitchen, and one featuring Masters sleepwalking in the kitchen in the beginning of the episode.

The episode ends when Virginia tells Masters her husband has come in for the study but won't reveal who her husband is. Masters goes through all the files and figures it out, and calls George/Walter in for a one-on-one interview about his sexual experiences.

The episode ends with Masters listening to a recording of George describing how Virginia likes it. "Because this one's different. She knows herself. She knows what feels good. She'll tell you. And she wants you to tell her what you want her to do to you… which is a fantasy in itself," George says. "I tell you, doctor. This one is magic." Does describing a girl as magic make this any less creepy? No, no, no.