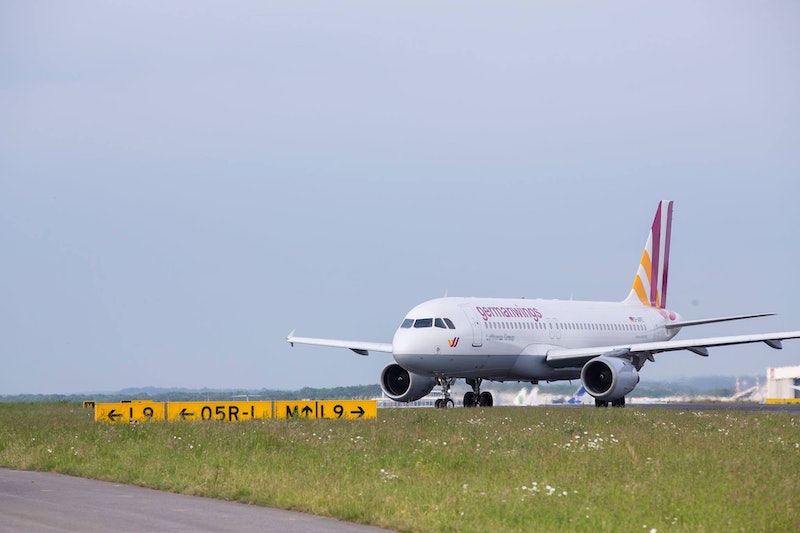 A German plane operated under Lufthansa Airlines crashed in southern France on Tuesday, French media is reporting. Germanwings Flight 4U9525 was en route to Düsseldorf, Germany, from Barcelona when it reportedly went down in the French Alps just north of the French Riviera, carrying at least 150 passengers and crew. There are likely no survivors, French officials said.

Update: On Tuesday afternoon, Gilbert Sauvan, president of the general council of the Alpes-de-Haute-Provence, told the Associated Press that the debris from the crash is spread out over 100-200 meters of land. "Everything is pulverized," Sauvan said. He added that the largest piece of debris seen so far from the search helicopters was the "size of a small car."

French President Francois Hollande told reporters on Tuesday that the "conditions" of the ill-fated flight were unknown. The French president confirmed that there were at least 150 people onboard, and none were likely to have survived. A majority of the passengers and crew are German citizens.

The Guardian reports that there were also 45 Spanish nationals onboard. Catalan president Artur Mas is expected to make a public announcement Tuesday afternoon.

Almost an hour after local French media began reporting the crash, Lufthansa released a statement on its Facebook and Twitter accounts confirming the incident. However, the airline, which operates Germanwings as a subsidiary budget airline, hoped search and rescue officials would find survivors. "If our fears are confirmed, this is a dark day for Lufthansa," the airline tweeted Tuesday. Lufthansa and Germanwings also changed their usually colorful airline logos on Twitter to a stark black and white.

Germanwings confirmed on Facebook that Flight 4U9525 was carrying 144 passengers and six crew members, and that there were no survivors. The airline, in collaboration with Lufthansa, has set up a hotline for relatives of the passengers and crew: 0800 11 33 55 77.

We do not know exactly what happened to Flight 4U 9525. Our thoughts are now with all the relatives and friends of our passengers and crew. We will do everything possible in order to provide further information.

German Chancellor Angela Merkel expressed her condolences to the relatives of the passengers and crew in a press conference on Tuesday. She said her thoughts were "with those people who so suddenly lost their lives, among them many compatriots." The German chancellor added that she would travel to the French crash site on Wednesday.

Flight 4U9525 took off at around 10 a.m. Central European Time Tuesday morning, about half an hour behind schedule, according to the flight tracking website FlightAware.com. The flight was supposed to be short — barely 1 hour and 40 minutes long. But as FlightAware.com shows, the Germanwings flight vanishes as it reaches southern France after flying over a patch of the Mediterranean Sea.

Flight tracking system Plane Finder also showed that Flight 4U9525 flew the exact same route over the Mediterranean and southern France on Monday.

Plane Finder reports that a French Air Force plane is currently circling the area where the Germanwings plane is believed to have crashed. The location of the crash is in the French Alps, and the terrain is reportedly hard to reach, French authorities have said.

There have also been helicopters in the area to locate debris from the crash. Search and rescue operations have established a staging area just outside the rugged terrain of the Alps.

French weather channel La Chaîne Météo reports that weather in the area was clear when Flight 4U9525 went down. However, the weather channel says the Airbus flew through a patch of unstable weather when it passed over the Mediterranean.

La Chaîne Météo adds that the area where Flight 4U9525 is "very snowy," with about 80cm of snow on the ground.

CNN reports that flight radar reveals the Germanwings plane made a rapid descent, dropping about 14,000 feet in just six minutes. Because Flight 4U9525 was already more than 30 minutes into takeoff, the plane was flying at 38,000 feet when its altitude quickly dipped in what aviation experts believe was at first a controlled descent.

According to raw data collected by Plane Finder, Flight 4U9525 made a sudden descent, but stayed en route. So far, it doesn't appear that the plane tried turning around or changing its direction.

Media outlets and flight trackers initially reported that a distress call was made from the cockpit. French Interior Minister Bernard Cazeneuve confirmed to reporters that there was a distress call. The pilots' last words allegedly were, "Emergency. Emergency."

However, there are conflicting reports, and a distress call may not have been made by the pilots. A spokesperson for the French Civil Aviation authority confirmed to the media Tuesday afternoon that the plane lost radio contact with air traffic control, but never sent out a distress call.