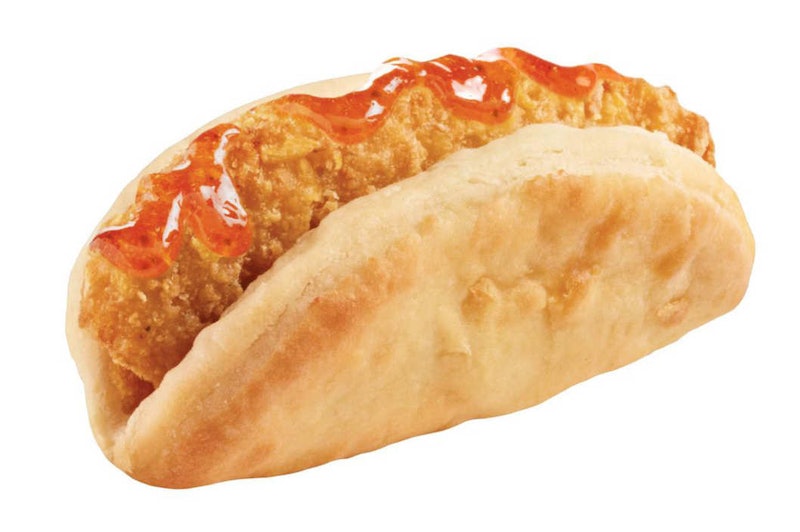 If you like to start your day off with some Mexican (inspired) fast food, you'll be delighted to hear that the Taco Bell Biscuit Taco will be making its debut on the menu this upcoming Thursday. After making its first foray into the breakfast arena last year, the fast food chain is expanding its offerings, seemingly to attract more customers. If you think about how important breakfast is to competitors like McDonald's and Burger King, it makes sense that Taco Bell would want to offer more options for morning commuters. In fact, McDonald's earns 25 percent of its revenue from breakfast; furthermore, Starbucks has also increased its breakfast food selection recently, with the goal being to bring food sales to four billion in the next four years. After testing the Biscuit Taco last fall, they've decided the biscuit taco is here to stay.

What exactly is a Biscuit Taco, you ask? It's essentially just a breakfast sandwich in taco form: The shell is made of biscuit, and the fillings can include chicken, eggs, or bacon. A jalapeno honey glaze finishes the whole thing off. This menu item, along with a larger breakfast menu, will be available for purchase on Thursday morning — and Taco Bell wants to make sure the word gets out. Said company CEO Brian Niccol to Bloomberg, “We have a lot of Taco Bell users who are already eating breakfast in the fast food industry. We still have a big opportunity on getting people aware that Taco Bell is open for breakfast.”

Despite the good news, though, I have some bad news to deliver, too: the ever popular Waffle Taco will be discontinued to make way for the Biscuit Taco. So if you were a fan of this popular breakfast item offering that was rolled out last year, you'll have to say a tearful goodbye.

Although I haven't yet embarked on eating breakfast at Taco Bell, I think the Waffle Taco sounds a lot more appetizing and innovative than the Biscuit Taco. I'm also not sure why they're taking away a popular menu item when the chain is trying to expand its breakfast options; it seems kind of counter-intuitive to me. Here are five reasons why the Waffle Taco should stick around:

Who doesn't love a good waffle in the morning? It's such a breakfast classic, and using the shell to create a taco is brilliant. This genius idea shouldn't go to waste!

2. Having More Options Is Better for Everyone

I love it when I walk into a restaurant and am overwhelmed with the number of options I have. I think more is always better; that way, everyone can get what they want. Taco Bell, take note.

3. Not Everyone Likes Tacos

4. The Waffle Taco Is the Original

This item was the first item to be introduced on Taco Bell's breakfast menu... so why would anyone want to do away with the pioneer? It's like keeping an invention but discrediting the inventor, which doesn't make any sense.

I am a huge fan of having a sweet treat in the morning to get my blood sugar going, so without any sweet options, I can't say I'll be going to Taco Bell for breakfast anytime soon. I know this is a common taste preference, too, so there should be options available for everyone's taste buds. Too bad we'll no longer be able to turn to the Waffle Taco to satisfy our cravings.