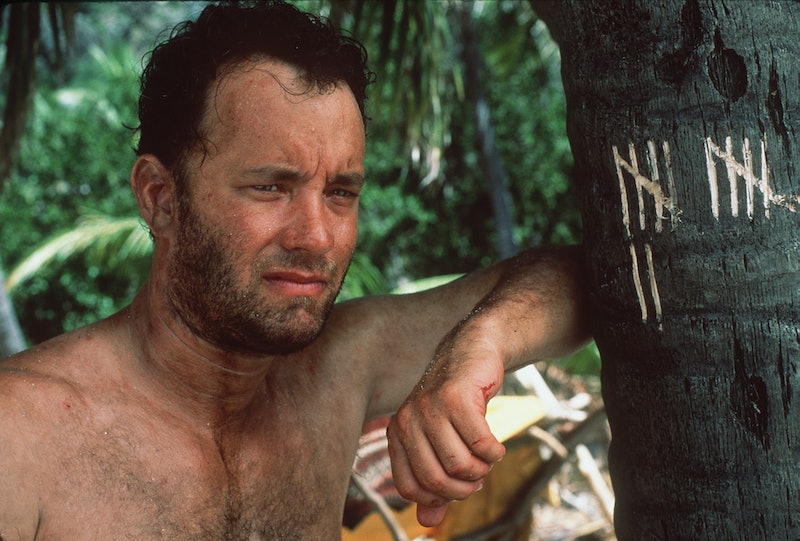 There's a reason Tom Hanks is one of America's favorite movie stars — he's just so gosh darn lovable, as he proved yet again on Monday night's premiere of The Late Late Show With James Corden. Hanks and Mila Kunis were the first celebrity guests of the Into The Woods actor's tenure on the show following Craig Ferguson's departure. And when Hanks wasn't busy mansplaining his manspreading, he was his typical charming self. That included an impressive and delightful segment called "Every Tom Hanks Movie In 8 Minutes."

That title is actually a little misleading. While the host and the actor hit 29 films from Hanks' resumé, they do miss a few of his most notorious titles — like The Bonfire Of The Vanities, The Ladykillers, and Angels & Demons. (Although I think we can all forgive Hanks for wanting to pretend those don't exist.) Also, the segment actually clocks in at under seven minutes, not eight, but now we're splitting hairs. Still, how did Hanks and Corden reenact such gems as Apollo 13, Cast Away, The Da Vinci Code, and Toy Story? With an entire community theater budget's worth of wigs, props, and green screens, apparently.

Check out some of the segment's best moments right here:

And now, witness the full segment in all its glory:

More like this
12 Years Ago, Austin Butler Manifested His Oscar Nom In This Disney Movie Scene
By Jake Viswanath
Sandra Bullock’s Razzies Speech Proves She’s The Ultimate Miss Congeniality
By Sam Ramsden
A 'Zoey 101' Sequel Movie Is Coming
By Jake Viswanath
This 'Emily In Paris' X 'The Hills' Crossover Is Très Chic
By Marenah Dobin
Get Even More From Bustle — Sign Up For The Newsletter
From hair trends to relationship advice, our daily newsletter has everything you need to sound like a person who’s on TikTok, even if you aren’t.