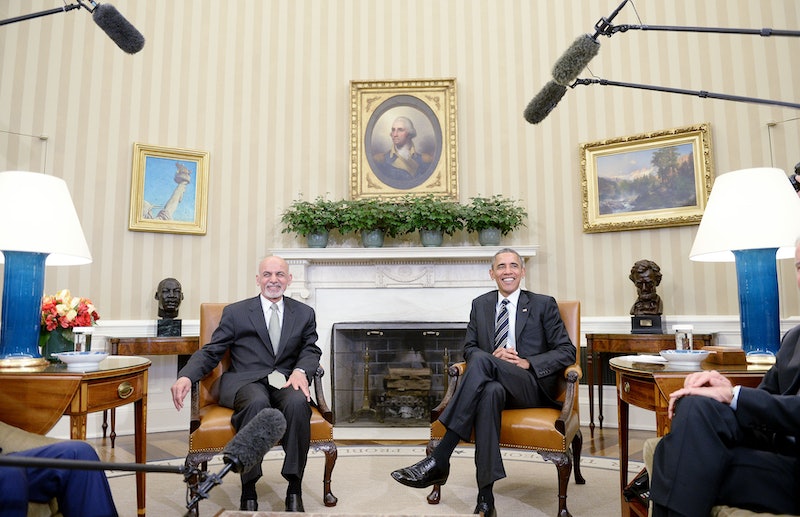 Even though just last month, the Obama administration was still on track with its plan to cut U.S. troop presence in Afghanistan by half in 2015, the president has announced a change of plans on Tuesday. At a press conference, President Obama revealed that all 9,800 U.S. troops in Afghanistan will stay through the end of the year. The decision comes after Obama met with Afghan President Ashraf Ghani, who requested slowing down the troop withdrawal, saying that security in Afghanistan hasn't fortified enough to handle extremists on their own.

At Obama and Ghani's joint press conference on Tuesday, the president announced that he and U.S. military commanders agree that keeping U.S. troops in Afghanistan would be best for the decision:

Afghanistan remains a very dangerous place.... We want to make sure we're doing everything we can to help Afghan security forces succeed so we don't have to go back.

The original plan was to cut U.S. troops down to 5,500 by the end of this year, but now the all 9,800 existing troops will remain. U.S. troop presence has not been determined yet for 2016, but Obama emphasized that he still wanted to complete withdrawal by the end of next year. He explained:

The timeline for a withdrawal down to a embassy center presence, a normalization of our presence in Afghanistan, remains the end of 2016. So that hasn't changed. Our transition out of a combat role has not changed.

During Obama and Ghani's talks on Tuesday morning, the Afghan president expressed concern over the situation in his country, where Taliban and Al Qaeda forces continue to threaten safety and ISIS is now setting up recruiting efforts. Ghani said at the press conference:

Peace is our goal, but peace from strength, an enduring peace that will bring regional cooperation.

Ghani's collaborative tone is reflective of a new chapter in U.S.-Afghan relations, one that is markedly friendlier than relations with his predecessor, Hamid Karzai. During the conference, Ghani made sure to emphasize his appreciation for the U.S. and its armed forces, and even thanked the American taxpayer "for his and her hard-earned dollars." Prior to the press conference, Ghani accompanied Vice President Joe Biden and Defense Secretary Ash Carter in laying a wreath at the Tomb of the Unknowns at Arlington National Cemetery.

Ghani highlighted this new partnership in his comments to the press on Tuesday, saying:

What we have emphasized and agreed is that we are strategic partners. We are bound by common interests and will act together to ensure both the safety of United States and the safety of Afghanistan. That is the important consideration. Numbers are a means; they are not an end in themselves.